The first season of The Punisher on Netflix ended up being better than what had been advertised. The series and it’s ultraviolent tone became a divisive factor in how the show was scene.

Some saw it as the true adaptation of the titular character and his anti-hero status within the Marvel Cinematic Universe. Others saw it as poor taste considering the rash of mass shootings and gun violence that’s plagued the country the last couple of years.

There was no disagreement in that Jon Bernthal owned and seemed born to play the role of vengeance-fueled and grief-stricken Marine veteran Frank Castle. His portrayal not just of Frank Castle but his vigilante alter-ego, The Punisher, was like watching a force of nature on screen.

It was a no-brainer that a second season of the series would be set into production and Netflix didn’t hesitate. It’s a bit bittersweet knowing that no matter how good season 2 turns out there’s a high probability that this will be the final season of The Punisher on Netflix as every Netflix-produced Marvel show has been cancelled the past year with only the upcoming seasons of The Punisher and Jessica Jones left.

Netflix and Marvel has had quite a couple years. It began in 2015 with the premiere of the first season of the Daredevil series. It was then followed up by the Jessica Jones series.

Here we are in 2016 and we get the second season of Daredevil to start the year and ending it with the just released Luke Cage series. What do Marvel and MCU fans have to look forward to in 2017.

Well, we have the upcoming Iron First series coming out this March 2017 to look forward to with Daredevil, Jessica Jones, Luke Cage and Iron Fist teaming up to become the Defenders to end the year.

We finally get the first trailer for Iron Fist and it dropped during New York Comic-Con for attendees first, but it didn’t take Marvel and Netflix to release the trailer on-line for all the bear witness to the Living Weapon. 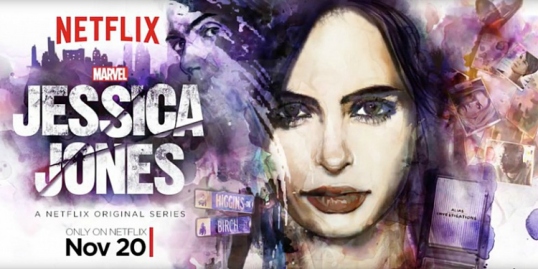 The Daredevil series on Netflix was a hit with both critics and audiences. It helped lay the foundation in the street-level corner of the Marvel Cinematic Universe. Now, we have the second of four planned original series with the upcoming Jessica Jones which looks to continue the mature themes and tone of Daredevil.

The series will star Krysten Ritter in the title role with Mike Colter appearing for the first time as the Marvel superhero Luke Cage aka Power Man. It also stars David Tennant in the role of main antagonist and just all-around creepy villain Zebediah Kilgrave aka The Purple Man.

Where Daredevil only scratched the surface of superpowers in the more down-to-earth, street-level part of the MCU, it looks like Jessica Jones will introduce a wider variety of abilities (superhuman strength and endurance, unbreakable skin, mind-control just to name a few) and an even more mature series than Daredevil with it’s depiction of psychological damage and trauma to it’s treatment of Jessica Jones’ sexuality throughout the series.

While the Avengers fight gods, alien invasions, sentient killer A.I. and terrorist groups bent on world-domination, the Matt Murdock’s and Jessica Jones’ look to keep the street-level safe for the people of Hell’s Kitchen.

Jessica Jones is set to premiere and release all 13-episodes on Netflix this November 20, 2015. Time to set that date for another Netflix binge watch.

“I accept your conviction. The lone man who thinks he can make a difference.” — Wilson Fisk

Today we saw the release of the official trailer for Netflix and Marvel Television’s first of five series based on characters from the Marvel Universe. Daredevil will be the first out of the gate and it looks to darken things a bit in the Marvel Cinematic Universe by bringing to the small screen one of it’s street-level heroes.

Daredevil (aka Matt Murdock) will soon be joined by Jessica Jones, Luke Cage and Iron Fist in their own web series on Netflix before teaming up for the Defenders series.

Under the guiding hands of showrunner (and Whedon alum) Stephen S. DeKnight, Daredevil will soon be available for bingewatchers everywhere on April 10, 2015.

“Bless me father for I have sinned.” — Matt Murdock

Marvel has pretty much been dominating the big-screen with it’s yearly event offerings. 2015 will not be an exception with Avengers: Age of Ultron set for a summer release expected to rake in the box-office by the money bins. Now, Marvel has set it’s site on the small-screen with it’s first Netflix Original Series that will be the first link in a five series set that will culminate in a team-up series called the Defenders.

This first link will be a new, and hopefully better take, on the street-level superhero Daredevil aka the Man With No Fear. The blind lawyer by day and vigilante by night whose blindness since childhood has helped him developed the rest of his senses beyond human levels. We shall not speak of the film adaptation starring Ben Affleck over ten years ago.

Marvel’s Daredevil will release all 10-episodes on Netflix this April 10, 2015.

I’ve been a fan of Joss Whedon shows since he first burst onto the scene with Buffy, The Vampire Slayer over on what used to be the WB Network. I’ve followed his work from one show to the next and if there’s one thing all his shows seems to have in common it’s that they take time to find their stride. In the past, shows were given time to get their bearings. See what  works and what doesn’t in a narrative sense. These first few episodes also give the writers a chance to flesh out characters for the long run. Yet, in this day and age of instant gratification Whedon and company may not have the luxury to take their time to get their footing, so to speak.

Marvel’s Agents of S.H.I.E.L.D. has been good to so-so the first three episodes. While all the episodes have been fun there’s also a feeling that ABC and Disney were really going on the cheap side of production with these episodes. It’s almost as if the powers-that-be producing the show were hedging their bets as to whether the show will be a sure-fire hit or a dud soon to be cancelled. This is Whedon we’re talking about whose last two series haven’t really panned out despite a rabid fanbase.

I think with tonight’s episode, “Eye-Spy”, the series may finally be finding its rhythm. It’s still not a perfect show. The fun factor is still present as is the witty banter that comes with a Whedon show, but where the first three episode looked somewhat cheap this fourth entry had a much more polished look to it. Maybe Disney and ABC finally loosened the purse strings. Even the look of the episode had a subtle change to it. Gone was the overlit scenes that added to the cheapness of the production. We actually were given scenes with shadows and darkness. There wasn’t an overlit sequence to be seen.

Let’s return to the episode at hand.

Tonight’s episode sees Agent Coulson taking the team to Stockholm, Sweden to investigate an apparent diamond heist. The heist itself was a nice cold opening. With over a dozen men dressed in matching black suits and all wearing those creepy red “Stranger” masks. First reaction to this was that they must be part of some sort of secret organization that was probably actively going against S.H.I.E.L.D. Yet, the writers do a 180 and we find out they’re just an elaborate, albeit unsuccessful, attempt to keep a briefcase carrying 30million dollars in diamonds from being stolen. We’re soon introduced to the target of Coulson and his team. One Akela Amador, a rogue S.H.I.E.L.D. agent and one-time Coulson protege, who may appear to be more than meets the eye.

This whole episode has been about getting a bit more character development for Agent Coulson and his latest protege, Rising Tide hacktivist Skye. The chemistry between the Coulson and Skye looks to be more well-developed than the love interest angle the writers have been trying to create between Skye and field agent Ward. While the latter looks like it’s still a hit-or-miss proposition the former looks to be developing quite nicely. If there’s one thing Whedon and his writers have been very adept at creating in their past shows it’s setting up the mentor/protege relationship. The best example would be Buffy and her Giles who also didn’t start off on the right footing in the early episodes of Buffy’s first season, but as time passed that relationship grew and there’s signs of something similar happening between Coulson and Skye.

The writing for tonight’s episode was crisper than the previous episode. We got less forced humorous moments. The dialogue actually flowed much more smoothly and allowed for the funny bits to come across naturally. Once again it’s Clark Gregg as Agent Coulson that provides the rock upon which the rest of the cast steady themselves. There’s an almost old-fashion earnestness to Gregg’s portrayal of Coulson which have endeared the character to legions of fans.

So, it’s only natural that the episode provide some more hints and bits of dialogue that Coulson may not be who he appears to be as well. Theories continue to abound that Coulson may be a Life-Model Decoy or being set-up to be future Avenger recruit Vision. There’s also some talk that he was revived by sorcery which means it’s a step to introducing magic and Dr. Strange to the MCU (Marvel Cinematic Universe). In the end, the mystery of how Coulson survived the mortal wound he received from Loki might just be the main mystery of the show’s first season.

“Eye-Spy” was was written by Whedon-veteran Jeffrey Bell and directed by Star Trek alumni Roxann Dawson (better known as B’Elanna Torres from Star Trek: Voyager). The two worked well together and I’ll be interested to seeing the two become more involved in moving the show through it’s first season. So far, they seem to have found the necessary balance of spy intrigue, superhero action and witty byplay that the first three seemed to lack.

time will tell if the show will be a huge success or just good enough to survive it’s first season. But seeing how much Marvel and Disney have invested in adding this show as an integral cog in their Marvel Cinematic Universe I see Whedon and his writers getting a bit more leeway than they’ve had in the past (looking at you Fox Network executives).