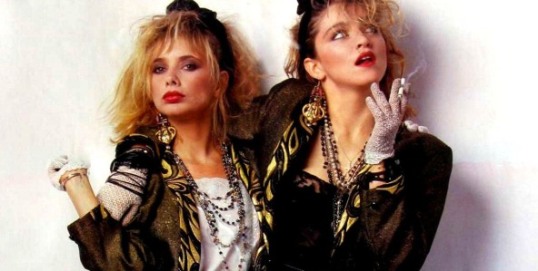 Rosanna Arquette turns 57 today! The beautiful granddaughter of comedian Cliff Arquette (aka Charlie Weaver of HOLLYWOOD SQUARES fame) began her career in the 70’s with TV mini-series like THE DARK SECRET OF HARVEST HOME and THE EXECUTIONER’S SONG, which brought her acclaim playing Nicole Baker in the adaptation of Norman Mailer’s Pulitzer Prize winning novel based on the Gary Gilmore case.

Soon Rosanna hit the big screen, costarring in John Sayles’ BABY IT’S YOU, then her signature role as the bored housewife who takes a walk on the wild side in DESPERATELY SEEKING SUSAN, the first major film for pop princess Madonna. Rosanna did some  good movies (SILVERADO, 8 MILLION WAYS TO DIE), then her career took somewhat of a nose dive, and she wound up in Europe a few years. Quentin Tarantino cast her as the dope dealer’s wife in the seminal PULP FICTION, and since then Rosanna has continued…


We’ve reached the end of my little journey from synthpop to industrial rock, and I think I’ve saved the best for last.

I didn’t watch MTV much in the early to mid-1990s, but I did on occasion. This was one of those music videos that would instantly stop me in my tracks. If it was on, then I was in front of the TV. At the time, it was the music video with the spinning pig’s head that seemed forbidden somehow. I also remember it being one of the most weird and best put together music videos of the time. Oh yeah, and the song is awesome. This is coming from someone who was not a fan of Nine Inch Nails either. I appreciated this song, I liked The Perfect Drug, and certainly was aware of their existence, but that still didn’t do it for me.

Today I remember Trent Reznor spinning on his back in the air more than anything else about it. The rest is filled with disturbing imagery, or at least imagery that appears disturbing when it is shown the way it is. I mean a lot of it is just stuff you would expect in a museum exhibit. One screwed up museum exhibit with the Warren Commission judging you for being there, but still. I’m also pretty sure that’s a picture of Jack Nicholson on the wall next to the monkey reminding me that I eventually have to do Jesus Christ Pose by Soundgarden. That’s really all I have to say because while I may love the song and video, I still have no real idea what it means. I just know that I want to watch it over and over till I figure it out, or it remains a mystery. Shouldn’t be too hard though, but I kind of like it just being a visual feast without any particular purpose to me.

This is one of those music videos where we know more than just the director.

Krista Montagna produced it, and appears to have produced some music videos for Madonna. She was also a production assistant on Silent Night, Deadly 2 (1987). That means the woman who produced this music video was probably there to witness Eric Freeman deliver his insanely over-the-top performance. Perhaps she was even there for “Garbage Day!”

On photography we have Harris Savides. He worked on numerous music videos. Some notable examples are Everybody Hurts for R.E.M. and Criminal for Fiona Apple. Not bad. He’s also done some work on feature films like Zodiac (2007), American Gangster (2007), Milk (2008), and Frances Ha (2012) among others. Again, not bad.

Robert Duffy edited the music video. He basically worked on other music videos that Mark Romanek made. Although, he did edit R.E.M.’s Losing My Religion. He has worked in feature films too, having edited The Cell (2000) and Self/less (2015).

Tom Foden worked as the production designer. Tom Foden did a few music videos, and what do you know, he was the art director on Radiohead’s Fake Plastic Trees. I didn’t expect that tie-in with what I said about Ministry’s Over The Shoulder. Foden also worked on The Cell and Self/less among other feature films as a production designer.

I guess the one we have to thank for Reznor spinning on his back in the air is Ashley Beck who did the visual effects on this and two other Mark Romanek music videos. She’s done visual effects on Romanek’s One Hour Photo (2002) all the way up to Suicide Squad (2016).

I guess I could go to Wikipedia and find out the intention of the music video, but I’m not going to do that. I’d like it to remain a mystery for me to crack for the time being.