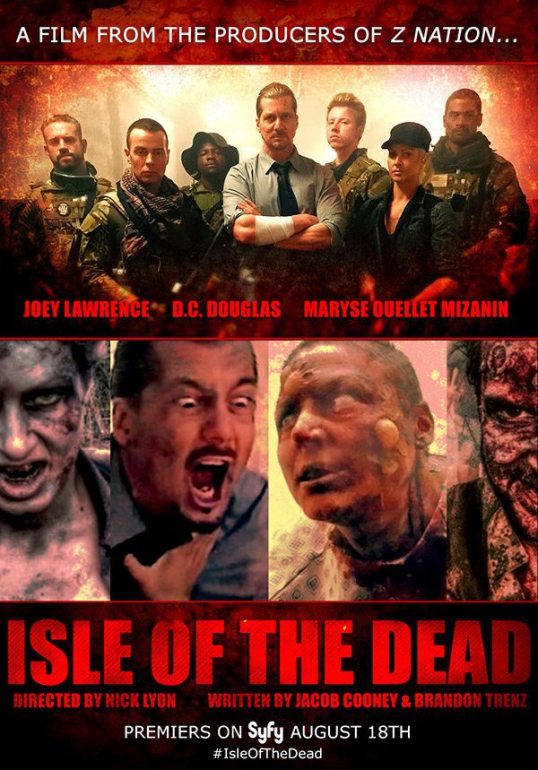 I just finished watching the premiere of the latest Asylum-produced SyFy film, Isle of the Dead!

Oddly, this film premiered on a Thursday night at 10:00 pm and, especially when compared to Sharknado 4 or 2 Lava 2 Lantula, it did so with relatively little fanfare.  Fortunately, I just happened to see the premiere mentioned on Facebook.  Otherwise, I probably would have missed it all together.

And that would have been a shame because, for a low-budget zombie film that was reportedly filmed in just 12 days, Isle of the Dead was actually a pretty effective little film.

The film’s plot will probably sound familiar but there’s a reason for that.  The action starts at a secret Army research post that is located on an isolated tropic island.  While Dr. Wexler (D.C. Douglas) watches, a virus spreads through the lab, turning doctors and soldiers into ravenous zombies and leaving death and terror in its wake.  Jump forward ten years later.  A team of Navy Seals has disappeared on the island and a strike force has been sent to find out what happened to them.  Leading the strike force is the tough Lt. Gibson (Joey Lawrence).  Accompanying them is a CIA agent named Mikaela Usylvich (Maryse Mizanin).  Early on, Mikaela establishes a simple run: If you’re bitten by a zombie, you’re as good as dead.  A zombie bite means a bullet to the brain.

Eventually, the strike force makes their way to the old research post, where they discover a lot of zombies and one rather crazed Dr. Wexler.  Wexler, who turns out to have a personal connection to Mikaela, has spent the last ten years experimenting on zombies.  As a result, we now have zombies who can shoot guns as well as zombies who can talk and who can plot and plan…

If all of this is sounding familiar, it’s because Isle of the Dead is an homage to the Resident Evil games.  (Douglas may play Dr. Wexler here but he’s best known for voicing Albert Wesker in the games.)  As such, the film follows a pretty standard formula: we watch as the members of the strike force try to move from one area to another without getting ripped to pieces by zombies.  Admittedly, I’m not a huge expert on the Resident Evil games but I’ve been told by people who are that Isle of the Dead was full of references that were both subtle and occasionally obvious.

What I can tell you is that, taken on its own terms, Isle of the Dead was an effective, no-nonsense zombie film.  The zombies were relentless (and I personally like the idea of talking zombies), the gore was both credible and copious, and the entire film maintained a proper atmosphere of impending doom.  Douglas did a good job as crazy Dr. Wexler and Maryse Mizanin got to kick a lot of ass as Mikaela Usylvich.  If you’re into zombie films or you just enjoy the unique Asylum aesthetic, I suggest keeping an eye out for Isle of the Dead. 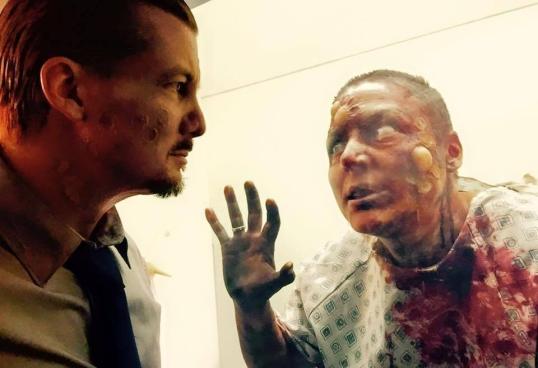 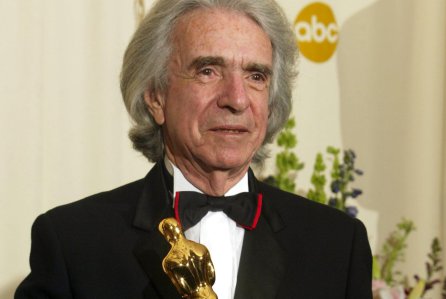 The name Arthur Hiller doesn’t really spring to mind when I think about great directors. However, when I heard the news he passed away last night at age 92, I looked him up on the IMDb. Much to my surprise, Arthur Hiller was responsible for some of my favorite funny films. Hiller wasn’t a distinct stylist or auteur, just a skillful handler of actors with a deft touch for comedy. In remembrance of the man, here are a few of my favorite Hiller-directed films, in chronological order: 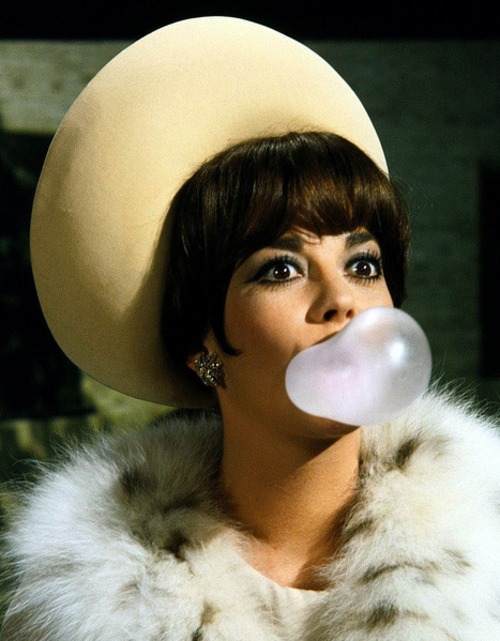 PENELOPE (1966): I covered this movie in-depth at this link about a year ago. It’s a silly, saucy comedy starring Natalie Wood as a neglected housewife who robs a bank. A quintessentially 60’s flick with comic support from Peter Falk, Dick Shawn, Jonathan Winters, and a good turn by Arlene Golonka as a hooker. It’s definitely worth your time if you haven’t discovered it yet. 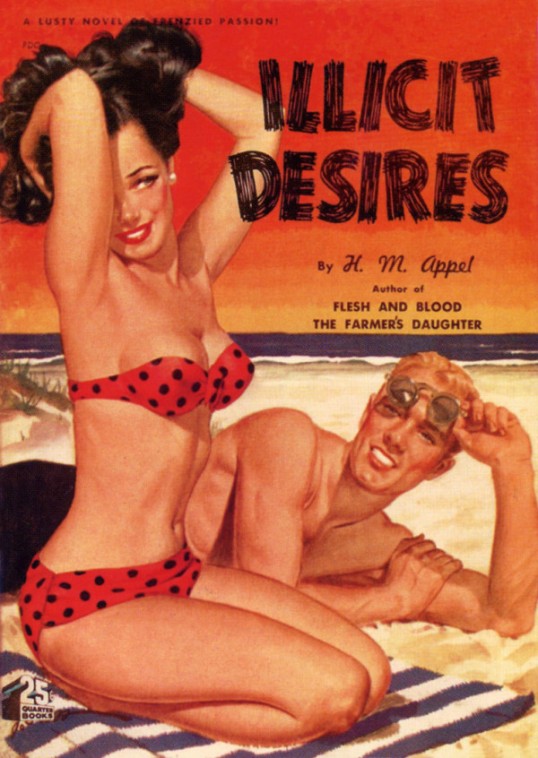 
I remember when this music video came out. It was for me the first time I heard Oasis. They seemed to come and go in the blink of an eye to be honest. However, they did leave behind several notable music videos, and this is one of them. Watching it now, I immediately thought of Werner Herzog’s Stroszek (1977). I kept looking around for the dancing chicken.

That’s not a bad thing, but I’m kind of disappointed director Nigel Dick didn’t put it in here somewhere. He seems to have used just about everything else in the video. However, it doesn’t feel like Nigel just threw everything he could think of at the screen in haphazard manner either. It gels together quite well and gets the real message across to the audience watching it. That message being that you are kind of supposed to think of Oasis as the new Beatles. That didn’t work out. It does seem to have panned out a bit better for them than it did for The Cyrkle with their song Red Rubber Ball back in the 1960s.

Speaking of the 1960s, take a look at this 1967 performance by The Box Tops of their song The Letter where apparently the syncing didn’t go exactly as planned, the band noticed, and they had some fun with it.

Let’s throw in one more for good measure with The Byrds performing Turn, Turn, Turn.

The point is that Oasis certainly fall into The Beatles lineage in sound even if they were never as good, and Nirvana was realistically The Beatles of the 1990s.

If you haven’t already heard the song Wonderwall, then certainly watch the music video. It’s essential 90s rock that is a time capsule of 1995, and a throwback to the 1960’s endless Beatles soundalikes.

What I find most interesting is the crew. I have done a little over 50 of these, but even without me, two songs that Nigel Dick directed the music videos for have been brought up in the last month or so. He directed both Everybody Wants To Rule The World by Tears for Fears and Paradise City by Guns N’ Roses. From what I can see by looking over his 300+ directing credits for music videos, he seems to have had a thing for black and white. He used it for Guns N’ Roses, Oasis, and Taylor Dayne at the very least. Nigel Dick has also worked as a producer and art director on about 50 music videos between the two jobs. That includes having produced Do They Know It’s Christmas? back in 1984.

The other crew member I was able to find is the producer Phil Barnes. From what I can see, he has produced somewhere between 80-90 music videos. He seems to have stopped now, while Nigel Dick seems to have just cut back on the number he is making these days. I love that Phil Barnes has at least four separate entries in IMDb because people clearly didn’t know it was the same guy.