I hate Hallmark movies like this one. I say that because it really gives me nothing to talk about. The kid not wanting his room painted pink? Nothing really there. The throwing like a girl line? Nothing there either cause they tie that to the mother and the fact that she just isn’t very good at baseball having not really played it. Well, there is the stupid cutaways to her job that are there just to tell us that she isn’t supporting herself on sunshine and air. While they are stupid, at least they are there. The only legitimate issue I have is with the ending. Oh, well. Let’s take a quick walk through this thing. It’s not like the Hallmark gods are going to strike me down for writing a short review. And by Hallmark gods, I mean Michelle who I am surprised hasn’t been leaving me comments on every post asking where my review of A Christmas Detour is.

The title card showed Stefanie Powers who plays the grandmother in this movie. That’s Lori Loughlin of course who is looking in a box to prepare for her role in the Garage Sale Mystery movies. Actually, her and her son have just moved from Iowa to California because dad basically just left and lives in Florida now. He will hardly be mentioned and spoiler alert, will not show up near the end of the film to provide a last minute speed bump. And take a look at this!

They actually bothered to have Loughlin’s car have an Iowa license plate! The rest of the cars have California license plates as they should, but hers doesn’t because she just moved there from Iowa.

Shortly after they arrive, we are introduced to the love interest. 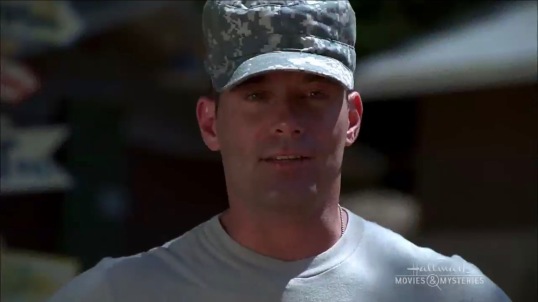 That’s Sgt. Vince (Johnny Messner). He starts the film off being stationed in Bosnia. He is a loner and once had a woman in his life, but she just couldn’t handle being married to a soldier. He’s not angry about it or anything stupid like that. He understands. That’s one of the really nice things about this film. They really cut out most, if not all of the bullshit that you usually expect in a Hallmark movie.

This is Loughlin’s son Jared (Charles Henry Wyson) looking like he wonders what a “Lotter” is. I’m sure the deaf and people who are hard of hearing who watched this were wondering what was being said a lot of the time. The deal is that his teacher wants the class to write letters to soldiers in Bosnia. Of course the kid is given the responsibility of writing to Sgt. Vince. Then of course Sgt. Vince comes home in short order and is stationed at a base very close to Loughlin and Jared. Then of course he shows up at their door.

It’s okay though because while Loughlin has the screen door closed she looks like this.

But as soon as she opens the screen door she looks like this. 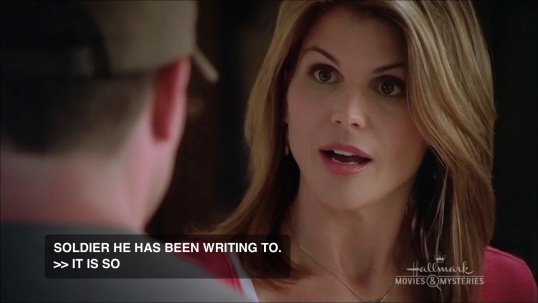 I guess I did have some snark and jokes in me. That’ll happen after you sit through the first hour of Mockingjay, Part I, then come back to write the rest of your review. However, I’m very sorry, but I couldn’t find the clip from My Cousin Vinny (1992) on YouTube. So you’ll have to settle for me saying she only had the screen obscuring her vision of him and no dirty window, trees, with all those leaves on them, and seven bushes. I’m really sorry. YouTube failed me.

Anyways, in no time he’s helping the kid to learn to play baseball. Although, I seriously wonder what someone who can’t hear thought of this shot. 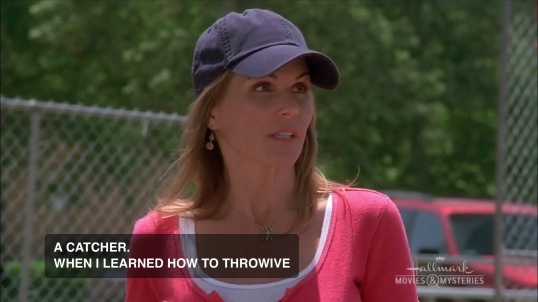 Back on the base, Vince’s friends couldn’t be happier for him. In fact, he has such a reputation that as soon as they find out he is supposed to be at the kid’s baseball game, hiding behind a piece of paper doesn’t protect him. 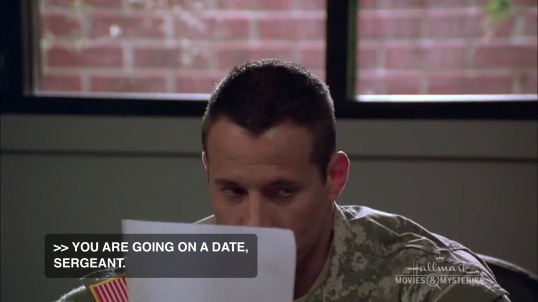 Oh, then the biological dad calls. Do you care? Cause the movie certainly didn’t. And thank you for not caring movie. I am so sick of Hallmark movies that suddenly bring back old flames just to create friction we know is ultimately meaningless. This movie really doesn’t bother with that nonsense.

At this point, the son kind of steps out of the picture. He does it willingly to make sure his mom and Vince spend some quality time together. He still tags along like when they go camping in the Ecuadorian jungle from The Wish List

No joke. That movie had one of it’s characters being driven in a jeep through bushes that were clearly in a Los Angeles area park and called it the Ecuadorian jungle. Looking back at my old review for that movie, I have no idea why I didn’t mention that.

Well, this is as good a time as any. While I know Lori Loughlin was 46 here, I still think she looks better than the 20 something actresses they usually get on Hallmark. Vince certainly likes what he sees.

I’d say this is when the film gets serious. He is going to ship out again. He really likes Loughlin and the kid. Also, Loughlin doesn’t like just working in drafting. She wants to be an architect. She even applies to go back to college to become an architect. They at first agree to separate, but quickly realize that’s just not going to work for them at this point. Now I am going to tell you the ending here because it’s where I have my real issue with the film.

He ships out. He’s still with Loughlin and the kid, but he leaves to go where he’s told to go by the army. I really did like that in Love in Paradise Luke Perry didn’t just up and quit acting. I also liked that the couple in Lead With Your Heart came to a real adult compromise. However here, his dialogue leads me to believe that he would really prefer quitting the army and being a stay at home dad. He talks about how baseball was a real passion for him, but it fell through. He talks about how architecture is a real passion for her. And it was clear as day to me that he would gladly spend his days taking care of Jared. Maybe he has a required enlistment time, but if they brought it up they certainly didn’t drive it home. They were shooting for making the film about a solider without a family pick up a family so he’s not really alone overseas. Heck, the original title for this movie was A Soldier’s Love Story, which clearly foreshadows this ending. It just wasn’t satisfying for me and didn’t jive with the material that winds down the film.

Now, all that said, this is definitely one of the better Hallmark movies out there. All of the four main characters have real parts which isn’t usual. Usually the kid would be non-existent or one dimensional. Also, Stefanie Powers would have been useless. Here she isn’t in a whole lot of the film, but when she is, she’s there for a reason. It’s not like Falling In Love With The Girl Next Door where I felt like they completely wasted Bruce Boxleitner and Shelley Long. I didn’t even bring up Vince’s friend on the base who is also good and serves the same purpose as Powers, but for Vince. There’s not really any forced Hallmark cliche stuff. It’s standard stuff, but isn’t “Oh, come on!” type stuff. Etc, etc, etc. Long story short, I still recommend this one despite my issue with the ending.

Since I have it and all. Here’s Loughlin judging me for reviewing this before her new Garage Sale Mystery movie.

Many Blaxploitation films of the 70’s feature super-bad ass-kickers like Shaft, Superfly, or Cleopatra Jones, but the heroes of TOGETHER BROTHERS are a motley crew of street punks in this unheralded but well done film. Shot in Galveston, Texas, and featuring a cast of unknowns as the gang, TOGETHER BROTHERS is a gritty urban thriller about some boys in the hood on the hunt for a psycho cop killer. The movie gives a realistic look at ghetto life and street culture that’s as relevant today as it was forty years ago.

Black patrol cop “Mr. Kool” is respected around the ghetto for being fair with its denizens, including young HJ and his posse. When he’s brutally shot to death by a mysterious assailant, HJ’s little brother Tommy witnesses the killing, and is so traumatized he’s rendered mute. HJ and the others (Mau Mau, AP, Monk) feel “the street owes Mr. Kool”, and begin… 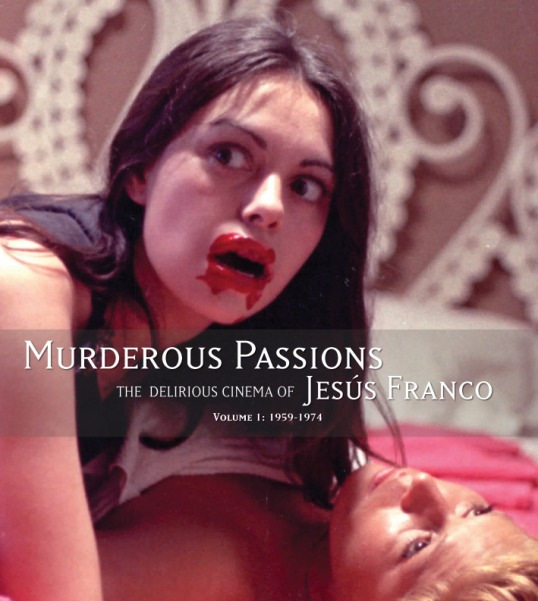 Today, I continue my look back at the previous year with my ten favorite art and entertainment-related books of 2015!  All ten of these books are highly recommended and well-worth your time and money.

Tomorrow, my look back at the previous year continues with my 10 favorite novels of 2015!