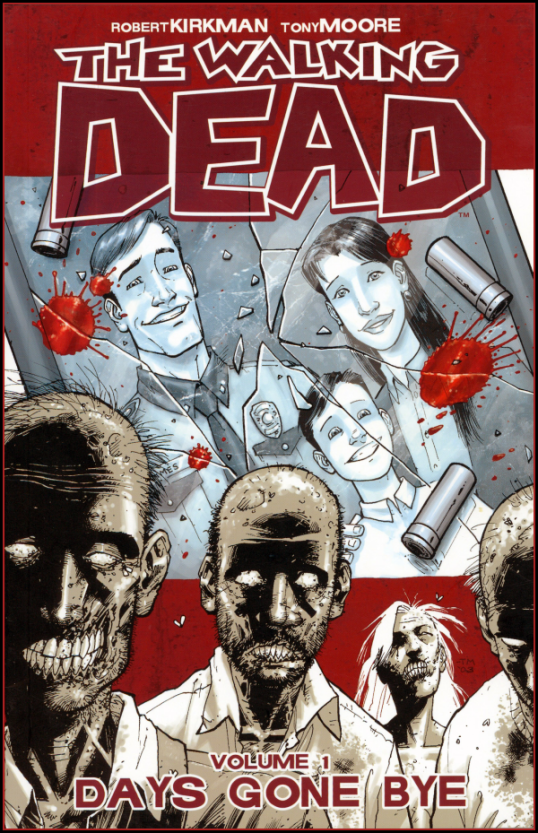 One of the geek properties that had been building a major hype and buzz at this year’s San Diego Comic-Con was Image Comics and Robert Kirkman’s long-running and critically-acclaimed zombie series, The Walking Dead.  It’s time at the Con didn’t just push the title to a new batch of fans, but also made a major showing at it’s very own panel with the cast and crew of AMC’s tv series adaptation of the comic book. It would be an understatement to say that by the  time The Con was over the series (both comic book and the upcoming tv series) walked away a clear winner and put the property into hype/buzz overdrive.

With the series set to premiere on AMC this coming October 2010 I thought it was high-time that I went back to my reviews of the collected trade paperbacks of the series. Each trade paperback collection were 6-issues long and usually started a current story-arc or finished an on-going one. This comic book series is one of the few in the market currently running which could was able to keep releasing its trades in 6-issue collected formats and not lose any impact that particular arc had when read as single-issues. It was by finding the first trade that I was initially introduced to Kirkman’s zombie opus.

It was 2005 and I was what one might call a lapsed comic book fan. I had burned myself out on the neverending flood of superhero titles even as independent ones quickly got cancelled, died out or just outright didn’t end but left its readers hanging. But it took a passing glance of The Walking Dead‘s first trade volume to get my interest in comic books rekindled. Kirkman’s foray into creating the zombie film that never ends made comic books fun for me again. The fact that Kirkman didn’t jump onto the fast-zombie bandwagon that became the rage of the mid-2000’s was a major plus in my eyes.

Using the same slow, shambling zombies that George A. Romero first made popular with Night of the Living Dead and its subsequent sequels, Kirkman continued the zombie story where Romero usually ended his films. All those times people have wondered what happened to those who survived in zombie films need not imagine anymore. Kirkman has created a believable world where the dead have risen to feast on the living, but has concentrated more on the human dynamic of survival in the face of approaching extinction.

I won’t say that the story-arc collected in this first volume has little or no zombies seen, but they’ve taken on more as an apocalyptic prop. One can almost substitute some other type of doom in place of zombies and still get a similar effect (as was done in Brian K Vaughn’s equally great series, Y: The Last Man). What Kirkman has done was show how humanity’s last survivors were now constantly, desperately trying to adapt to a familiar world through unfamiliar circumstances. Characters from the start make the sort of mistakes regular people would make when they don’t know exactly everything that was happening around them. Instead of chiding these people as one reads their story, we sympathize and hope for their continued survival.

The artwork by Tony Moore is another reason why people should check out this first volume. While it is only in this volume (the first 6-issues of the series which is now deep into the 70’s) Tony Moore’s art puts the horrific in the story Kirkman has written. His zombies and their look were quite detailed and for fans of the series his departure after issue 6 and staying to just make the covers to each single-issue has rubbed them the wrong way. While I subscribe to the opposite viewpoint that Moore’s work was a nice bonus to bring in the readers in the end his artwork was gravy to what was already a fulfilling story that would’ve been as effective if the artwork was mediocre at best. It’s a good thing that follow-up and series regular artist Charlie Adlard more than holds his own in drawing the rest of the series.

This first volume was a great beginning which should automatically pull in the hardcore zombie fans (pretty much any of those types should’ve been reading the books for years now) while giving newbie fans to the zombie genre a reason not to dismiss it as just another gorefest lacking in drama and great storytelling. Already Kirkman has done more to realizing the universe Romero created than a lot of the hack filmmakers who have taken Romero’s idea and cannibalized it for their own profit. I consider The Walking Dead as a must-read for anyone looking to find something different from all the costumed superhero titles. It is also a great starting point for those awaiting the start of the tv series, but have never read the original comic book source.