It’s been awhile since I’ve posted any updates, and while I’ve always meant to get something written up, I always found excuses not to. But with the recent passing of Satoshi Kon, it would be remiss of me not to post up my thoughts of the career of one of the truly great anime directors. First I’ll give a brief rundown on his works as director, along with my thoughts of each and then I’ll end with some closing thoughts on his career in general.

This was my first experience with the directing talents of Mr. Kon, as well as his directorial debut.  Back in 2001 when I was just starting to get into actually buying DVDs of anime, I asked around which titles I should own.  Among the responses, Perfect Blue kept coming up, so I decided to give it a shot.  Back then I didn’t really follow anime websites or magazines, nor was torrenting really a driving force, so this was a complete blind buy for me.  What I got really opened my eyes to what anime could be like.  Before this, anime to me largely was giant robots blowing things up, or martial arts masters powering up for 20 episodes and blowing things up.  Never did I think that anime would be an effective means for bringing me a psychological thriller that so blurred the lines between reality and fiction.  Plus, it tells a tale of obsession for idols in Japan that rings just as true today as it did back in 1998, as one can see happening between Aya Hirano and the degenerates of 2ch. 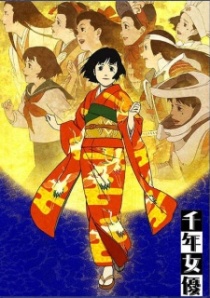 Next up for Mr. Kon was Millennium Actress.  A popular, recurring theme in most of his works is the blurring of the lines between reality and fiction and this movie brought it to an even higher level than Perfect Blue.  The biggest difference between the two is Millennium Actress is a lot more light hearted in tone than the fairly dark Perfect Blue was, even if the argument can be made that it doesn’t necessarily have a happy ending.  Throughout the film, we are brought through the life of an actress as she recounts her career and her search for the love of her life.  However, it’s shown by placing the people telling the tale into the movies of her career and then popping back into reality, sometimes leaving one to wonder what was real and what was scripted.  Such a directing technique does come with the risk of turning viewers off if it gets too convoluted, but Satoshi Kon knew just the right amount of tweaking to do to keep one thinking, but turn into outright confusion for the sake of confusion.

For his third film, Satoshi Kon put the blurring of reality and fiction on the back burner and instead focused more on the human relations.  Tokyo Godfathers looks at the lives of three homeless people and a baby they find on Christmas Eve.  While the story told here is a bit more straightforward than his other offerings, it has a lot more emotional impact as you find out what led each of these three to where they are, and also what led the baby to being abandoned.  Rest assured, the story doesn’t get to its conclusion without a couple twists and turns along the way, but this one has the closest to a happy ending as any of his movies.  The fact that it manages to tell a compelling tale without having to use his psychological tool shows why Satoshi Kon was such a respected director.

This marks Satoshi Kon’s first and only foray into directing a television series, and if Tokyo Godfathers was him taking a break from the psychological aspect of his stories, Paranoia Agent more than makes up for the lost time.  The show centers upon a police investigation into a series of attacks on people by a boy with a golden bat.  But, as I said, this is a return to form for Mr. Kon, and so there’s much more to this than merely some attacks.  Plus, add in the fact that in each case after the attacks, the people feel almost grateful for it as it seemed to help them fix their various stresses in life and you have a story that will keep you wondering right up until the end.  Admittedly, there are times when it seems like the story is going to get out of control, and it’s easy to see that Mr. Kon is much more comfortable creating feature length films rather than regular television series, but the fact that it still manages to work shows the true talents of the man.  I feel confident that had he lived longer, we would have seen another series from him, and since he already had the experience under his belt, he could have done an even better job than the already fine showing he did here. 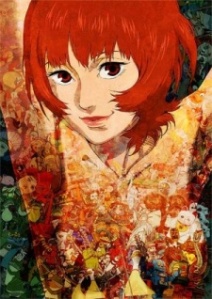 His most recent completed work was 2006’s Paprika.  A big theme in this movie is dreams, so as you can imagine the lines between reality and fiction get blurred once again.  In fact, they’re so blurred, that they often wind up breaking the fourth wall within the context of the movie to the point where dreams and reality become one and the same.  While personally not my favorite movie of his, it shows that even though he uses the same theme throughout most of his works, he still is able to tell a compelling story each time without it feeling predictable and tired.

Satoshi Kon was working on a new film set to release in 2011 called Yume Miru Kikai, or The Dream Machine.  Sadly, due to his untimely death, the status of the film is now unknown.  One would imagine that production will continue, and hopefully Mr. Kon shared his vision of the film with others so that it may be completed as he would have wanted it to be.  The head of Madhouse Studios, for which Mr. Kon was working, stated it was a sudden death from cancer, although Japanese entertainment firms are notorious for their privacy and the privacy of their talent so just how long Mr. Kon had been afflicted with the disease is hard to say.  Whether or not this film sees the light of day, one of the shining lights of the anime industry has sadly been extinguished far too early.  With the dearth of talented young anime directors, this loss will be felt all the more acutely.  Rest in peace, Mr. Kon, you will be sorely missed.

Well, it’s now official. AMC has finally released the very same trailer that people not fortunate enough to have attended San Diego Comic-Con last month. This trailer is under 5 minutes long and it’s the same one those who attended the Comic-Con panel for the show saw. Only shaky and grainy bootleg copies of the trailer has been seen outside of that panel. While some bootleg versions were quite good in quality they’re still not a substitute for the official release of the same trailer by AMC for everyone to watch.

This official trailer release was also AMC’s way of finally announcing the premiere date of the 90-minute pilot episode (directed by showrunner and producer Frank Darabont). The pilot will premiere worldwide on Halloween Night, October 31, 2010. While some thought the pilot will premiere early on AMC’s “Fearfest” campaign for October I think it’s appropriate that the series premieres on Halloween Night. I can definitely see many fans of the comic book series planning their Halloween parties to include group watch of the pilot episode the very same night.

Still two months away and this trailer definitely doesn’t make the wait any easier. 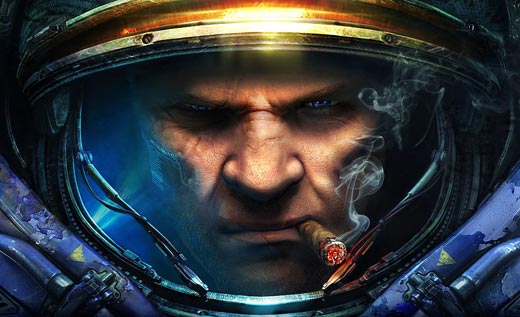 Today I want to point out the benefits of communicating during 1v1 matches in which you are clearly outclassed. For every two or three players who ignore you or start thrusting their e-peens wildly, one is going to give you some awfully sound advice. My main point: When a player owns you in a particularly intriguing way, don’t just gg and watch the replay, actually talk to them.

I’ll highlight two personal examples to show you what I mean.

I had thought for a while that watching pro replays was only beneficial to advanced players – that at my level you should just learn from experience. This just isn’t true, but it seemed reasonable enough. I was winning most of my matches and my losses were usually close. I must have been doing something right. It was on those rare occasions where a fellow Bronze or Silver league player would ruthlessly crush me without cheesing that I started to think “these guys obviously didn’t place well, how are they so good already?”

So I started to ask, and sometimes I’d get a serious insightful answer. I found out about Day[9]’s tutorials and some of the other resources I’ve used not through scouring endless forum posts, but by being directed to them by better players in-game.

If you ask for information on forums you’re going to end up with a ton of different links to sort through. If you ask for it from individual players who you know from experience are using the kinds of techniques you want to copy, you’ll end up with a few specific, tested, relevant sources.

And you might fair better than that. When I switched from Terran to Toss as my 1v1 race I took an immediate liking to massing zealots while teching up to void rays. This worked consistently for about four games, and then I lost horrifically to a guy who took the exact same approach. I asked him what I did wrong, and he actually invited me to a 2v2 party. Over the course of the next five games (which lead to my only Platinum placement to date), I learned more about playing Protoss quickly and defending the rush and expanding effectively than I could have ever hoped for.

There are a lot of simple things in Starcraft 2 that you can easily overlook – things that general guides aren’t going to tell you and you might not notice in replays. For example, I had no idea that chrono boost could be used on a Nexus. It’s not a secret, just a false assumption on my part. Because I asked a guy in a 1v1 what I did wrong, I had a second set of eyes to catch stupid mistakes like this and point them out to me.

I’m not advocating zealot to void ray as the best Toss technique, and have had better success since by choosing between void rays and stalkers once I have a feel for what the other guy’s doing. Especially against Terran, building two visible stargates and not using them can trick him into massing a bunch of useless vikings. Of course, I’m not advocating that either, I’m just saying that:

Lots of players are ready and willing to help you. If you ask for advice when your base is burning away beyond repair, you just might get it.