1) Simon, King of the Witches — I’ve never seen this film but I caught this trailer on one of the 42nd Street compilation DVDs.  It doesn’t really make me want to see the film but I love the trailer because it is just so totally and utterly shameless.  Seriously, could this thing be more early 70s?  As well, I’ve always wondered — would witches actually have a king?  I mean, seriously, get with the times.

The film, by the way, stars Andrew Prine who apparently had a really promising film career until his girlfriend, Karyn Kupicent, died mysteriously in 1964.  A lot of people believed that Prine killed her though he always denied any guilt and there’s really no evidence to connect him to the crime.  Interestingly, even more people seem to think that Kupicent was murdered because she knew something about John F. Kennedy’s assassination.  Finally, true crime author Steve Hodel has suggested that Kupicent was actually murdered by his father, Dr. George Hodel.  (Steve also claims that George was the Black Dahlia killer, the Zodiac killer, Chicago’s lipstick killer, and that George was responsible for just about every unsolved murder in history.  Oedipus much?)

2) The Town That Dreaded Sundown — Though I didn’t consider this while selecting this trailer, this is another film that features the unfortunate Robert Prine.  I’ve seen this film exactly one time when it showed up on late night television once.  Unfortunately, considering that it was 4 in the morning and the movie was obviously heavily edited for television (not to mention that constant commercial interruptions), I didn’t really get to experience the film under ideal circumstances.  As a result, I’ve been trying to track this movie down on DVD ever since.  It’s not an easy film to find.

One of the reasons this movie fascinates me is because it’s not only based on a true unsolved crime but it actually follows the facts of the case fairly closely.  In the late 40s, Texarkana was stalked by a masked gunman known as the Phantom Killer.  The case was never solved and its gone on to become a bit of a local legend in the rural Southwest.  Part of my interest in this case comes from the fact that I grew up in the rural Southwest.  It’s the part of the country I know best and this film was actually filmed in the southwest as opposed to just an arid part of Canada.  Interestingly enough, the Phantom Killer had a lot of similarities to the later Zodiac Killer.  However, as far as I know, Steve Hodel has yet to accuse his father of haunting Texarkana.

The film itself was made by Charles B. Pierce, a filmmaker who was based in Arkansas and made several independent films in that state.  Perhaps this explains why the trailer refers to “Texarkana, Arkansas” even though everyone knows that the only part of Texarkana that matters is the part that’s in Texas.

3) Nightmares in a Damaged Brain — This is one of the infamous “video nasties” (trust the English to not only ban movies but to come up with a stupid and annoying label for those movies).  Like many of those films, this is a gory Italian film that seems to bathe in the sordid.

It’s also fairly difficult film to find.  The DVD I own is actually a copy of the severely cut version that was eventually released in England, of all places.

(Another thing about the English — why is it that a culture that obsessively uses the word “cunt” in casual conversation seems so driven to distraction by a little fake blood?  It’s as if someone told them that banning movies would somehow make up for the attempted genocide of Catholics in Northern Ireland.)

However, even in cut form, this is a disturbingly dark and frequently depressing film.  Evil seemed to radiate through my entire apartment the whole time I was watching it and that atmosphere is captured in the movie’s trailer.

As a sidenote, the gore effects in this film are credited to Tom Savini.  At the time of the film’s release, Savini announced that he actually had nothing to do with this movie.

4) To the Devil a Daughter — I recently read a biography of Christopher Lee in which he cited this movie, along with the original Whicker Man, as one of his personal favorites.  It was also the film debut of Natassia Kinski, the daughter of Klaus Kinski.  Considering Klaus’s reputation, the title is ironic.

5) Vampire Circus — This is another movie that I’ve never seen but I’ve heard great things about it.  Supposedly, its one of the last great Hammer vampire films.  Reportedly, it was controversial at the time of its release because it featured vampires attacking English children.  (Which, if nothing else, at least prevented from growing up to kill little Irish children.)  Seeing the trailer leaves me even more frustrated that it has yet to be released, in the States, on DVD.

6) Dr. Butcher, M.D. — This is actually a rather odd zombie/cannibal film hybrid from Italy.  It was originally titled Zombie Holocaust but the American distributors retitled it Dr. Butcher.  I love this trailer for much the same reason I love the Simon, King of the Witches trailer.  It is just pure and shameless exploitation.  Plus, it features some of the best moments of the great Donal O’Brien’s performance as the “title” character.  I recently forced my sister Erin to watch Zombie Holocaust.  Ever since, whenever I start to ramble too much, she simply looks at me and says, “Lisa’s annoying me.  About to perform removal of vocal chords…”  She actually does a fairly good impersonation.  Consider this just more proof that the Grindhouse brings families closer together. 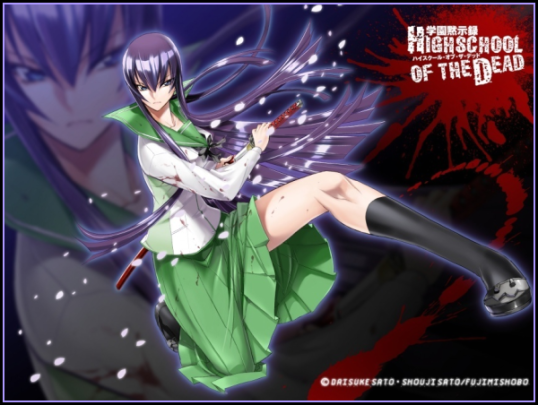 Madhouse’s anime adaptation of the the horror and ecchi manga, Highschool of the Dead, has almost reached it’s halfway point with episode 6 and this time we get an unusual balance of both those traits. The episode almost does a schizo break in and out of it’s running time. For a 3-4 minutes we get scenes of pure ecchi (softcore fanservice) that definitely panders to the puerile minds of its target audience (teenage boys and young men) which is not a bad thing, mind you. But then it’s followed up with 3-4 minutes sequences of chaotic horror.

What’s interesting was that the scenes with the student (and one ditzy nurse) survivors were all ecchi, especially the opening scene with the females in the group deciding to bathe together. Yeah, much female bathing together shenanigans ensue. This scene was lifted directly from the manga source and expands on it to the benefit of its target audience and longtime readers.

The scenes where we see the zombie apocalypse unfolding and how the horror has put both civilians and authorities on the path of breaking doesn’t involve out intrepid survivors at all. It’s almost as if this episode was the group’s reprieve before the next storm hits them which should be arriving very soon (I’d say the start of the next episode). There’s a particular scene on one of the bridges where a police barricade has been set-up that really points out the horror of the series. It involves a young mother and her young daughter (one who has been bitten). To say that this scene is not just horrific and tragic would be an understatement. I’ve always said that in stories of an apocalyptic nature one of the first thing to go was sentimentality and this sequence in episode 6 hammers on this point.

Overall, the episode was very good as usual. For fans of the manga it should be a delight to watch. For those whose experience with Highschool of the Dead has been this anime adaptation this episode may seem a tad odd in that it tries to balance both the sex and horror aspect of the series. It might be difficult for these newcomers to buy into the episode that one minute has an almost softcore, all-girl porn scene going then followed-up with apocalyptic horror then back again to softcore. Again, I will say that the series will continue to weave these two traits together and if one is still sticking with the series waiting to see if things change then they will be sorely disappointed.