Hi there.  Lisa Marie here.  I know that usually when I show up on this site, it’s too either toss up 6 more exploitation trailers or to present a review of a film that’s been unfairly dismissed (or foolishly overpraised) by the mainstream media.  It’s what I love doing and I hope everyone gets at least a little occasional pleasure out of it.  (If you don’t — well, please don’t tell me.  I’m surprisingly sensitive.)

Last week, I expected that, at this time, I would have posted a review (probably negative) of the mainstream’s latest attempt to make an art film — David Fincher’s The Social Network.

Unfortunately, life in general — and my body in specific — had other plans.  I’ve been sick since Wednesday and, for the first time in over a year, I did not spend my weekend at the movies.  It’s enough to make a girl cry.

(That said, I did spend most of the weekend lounging about in various states of undress so maybe concentrating on that image will help to lessen the sting of no Social Network review…)

Just based on the evidence presented to me so far, the Social Network sucks.

2) Andrew O’Heir at Salon.com has compared The Social Network to — wait for it — Citizen Kane.  Hopefully, when the zombie apocalypse comes, Zombie Orson Welles will eat Andrew O’Heir first.

3) According to Rotten Tomatoes — the web’s greatest resource of Mainstream Opinion — The Social Network is the best-reviewed film of 2010 so far.  For a film to be that loved, it must be really needy.  And what do needy things do?  They manipulate, they lie, and they go out of their way to beg you to like them.  A great film doesn’t give a fuck what you think.

4) The movie stars Jesse Eisenberg who has already been in 3 great movies — The Squid and the Whale, Adventureland, and Zombieland.  Sorry, Jesse but only Giovanni Lombardo Radice is allowed to appear in four great films in just four years.

5) The movie is written by Aaron Sorkin.  This movie is being advertised as the “defining” movie as my generation.  Sorry, but the defining movie of my generation isn’t going to be written by some smug, 50 year-old, male, sexist, crackhead.

6) The movie is directed by David Fincher which normally would be a good sign except all the reviews are concentrating on Aaron Sorkin.  So, is our Mr. Fincher so needy for an Oscar that he’s basically abandoned his own vision in the service of some smug, 50 year-old, male, sexist, crackhead?

7) Apparently, this movie celebrates rich kids getting richer.  Just what America needs right now.  Yes, let’s celebrate the dumbfug toadsuckers of the world while the guy flipping your burger over at McDonald’s loses his health insurance.

8 ) The Social Network is apparently number one at the box office after this weekend and apparently has gotten great word of mouth.  You know who else got great word of mouth at one time?  Adolf Hitler, that’s who.  Up until it was no longer socially acceptable, the mainstream loved him too.

9) The Social Network has a really crappy, first draft title.  Seriously, that’s the name of the movie?

10) Sasha Stone, over at Awardsdaily.com, loves this fucking movie and to me, that’s reason enough to assume it’s going to be an overrated piece of foolishness.  Seriously, Awardsdaily.com is a great site if you want to keep up with all the Oscar buzz but — when it comes to reviews — Sasha Stone, Ryan Adams, and the rest of the site are all so middle class and predictable.  (Of course, what do you expect from a site that regularly quotes William Goldman?)

So, that’s my pre-viewing review of The Social Network.  Hopefully, I’ll see it next weekend and be able to post an actual review.  Then we’ll be able to see if the film simply conformed to my own biases or if it truly is worthy of all the hype.

Until then, I’d love to hear your thoughts on The Social Network and the growing chorus of mainstreamers who insist that this is the greatest film of all time.  Am I being too hard on it or is this yet another example of the mainstream emperor wearing no clothes?

“How could you have possibly enjoyed that movie?”

I hate that question.  I hate the self-righteous tone of it.  I hate the demand that I justify anything that I choose to do with my life.  I hate the implication of the question, the suggestion that somehow there is some sort of moral force at the center of the universe that determines whether or not a movie can be enjoyed.

Unfortunately, no matter how obviously justified I am in loathing that question, it’s still one that I am frequently asked.  How can I not only enjoy watching old school exploitation and grindhouse films (the majority of which were made before I was even born) but also devote a good deal of my time to not only watching these movies but tracking them down and then telling the rest of the world how much I love them?

(Of course, what they’re really asking is what are you doing watching exploitive trash like House On The Edge of the Park or Fight For Your Life when you should be out finding a husband, driving an SUV, and living a life of quiet desperation?)

First off, I should confess.  I have commitment issues, I know it.  I realize that, as a result of some personal experiences in the past, that I tend to beg for affection and attention even while I’m putting up my own invisible wall to keep anyone from getting too close.  It’s not easy for me to trust but, after writing for this site since May, I feel like maybe it’s time to share a little bit more about me.  Hi.  My name is Lisa Marie.  I’m 24.  I have three older sisters that I love.  I’m a proud to be an Irish-German-Spanish-Italian-American.  I lived in five different states before I was 13 and I’m rarely amused when people point out the country twang in my voice.  Up until I was 17, ballet was my life but then I fell down a flight of stairs, broke my ankle in two places, and that was the end of that.  I worked very hard to earn a degree in Art History.  Not surprisingly, my current job has nothing to do with art or history.  I have asthma and heterochromia (my right eye is a darker shade of green than the left).  I’m blind without my contacts.  I like cats, driving fast, and being single.  I dislike dogs, needy men, and those tiny little smart cars.  The only thing that can equal my love for the Grindhouse is my hatred for the Mainstream.

Here’s a few reasons why.

1) Before Independent Film, there was the Grindhouse.

Today, if a young director wants to show what he’s capable of doing, he makes his own little film and enters it into various film festivals and, if he’s made something interesting, he might sign a distribution deal and his film might pop up down here in Dallas at the Angelika theater.  In the 70s, that young director would make an exploitation film, hope that it had enough sleaze appeal to make back its budget by playing in a New York Grindhouse (or a Southern drive-in) and, if he had made something interesting, his cheap, exploitation film might eventually end up being released on DVD by Anchor Bay or Blue Underground.  The best Grindhouse films were made by director who were eager to show what they were capable of doing.  These movies were not made by multimillionaires with houses on both coasts of the country.  Grindhouse movies were made by director who had to work to create something memorable, filmmakers who knew that they might never get another chance to put their vision on-screen.

2) The Mainstream Lies.  The Grindhouse is honest.

3) The Mainstream is bland.  The Grindhouse is dangerous and unpredictable.

Where else but in a Grindhouse film could you hear a killer who speaks like a duck like in Lucio Fulci’s The New York Ripper?  Because the Grindhouse was free of the need to try to fit in with what the mainstream decreed to be normal, the Grindhouse had the freedom to come up with some of the most brilliantly demented plots in the history of film.  When was the last time that the plot of a Mainstream film really caught you off guard?  I’m not talking about safe, inoffensive surprises like Avatar‘s 3-D effects.  I’m talking about a plot where, halfway through, you look at your fellow viewer and you both say, “What the fuck was that!?”  Anything can happen in the Grindhouse.  As soon as things start to feel safe and a little boring, the Grindhouse has the ability to make things exciting again.  The Mainstream, meanwhile, just asks you to get married.

Here’s a story of two movies.  In the mainstream Brave One, Jodie Foster gets a gun after she’s raped and her dog is stolen.  (In typical mainstream fashion, the movie doesn’t seem to be sure which crime is supposed to be worse.)  In the grindhouse Ms. 45, Zoe Tamerlis gets a gun after she’s raped twice in one day.  In the Brave One, Foster passively sits on the New York subway and waits until she threatened with rape a second time before she kills the potential rapist.  In Ms. 45, Tamerlis shoots every man she sees because she knows that every man she sees is a potential rapist.  In The Brave One, Foster gets her revenge by remaining the victim.  In Ms. 45, Tamerlis becomes the aggressor.  Both Foster and Tamerlis act in self-defense but Foster is wracked with guilt because the mainstream cannot risk losing its audience.  Tamerlis becomes stronger and more confident with each murder as, for the first time, she has found a way to control her own destiny.  At the end of The Brave One, Foster is not only rescued by a man but she gets her dog back too.  At the end of Ms. 45, Tamerlis goes on a shooting rampage at a Halloween party and is finally killed by another woman.  The Brave One‘s tag line was “How many wrongs to make it right?”  Ms. 45’s tagline: “She was used and abused and it will never happen again!”

I know this is probably going to be my most controversial argument.  Don’t get me wrong, I’m not advocating that we should just go out and start randomly shooting men.  But, I will say this — in Ms. 45, Zoe Tamerlis refuses to be a victim and she — and the film — refuses to let society off the hook.  When I think about Ms. 45, it doesn’t inspire me to hate men (because, trust me, I don’t) and it certainly doesn’t inspire me to grab a gun and start shooting.  It does, however, inspire me to not allow myself to fall into that never-ending cycle of victimhood.

(If The Girl With The Dragon Tattoo had been released in the 70s, it would have played at the Grindhouse.)

5) Lastly, and most importantly, the Grindhouse is still our little secret.

Let’s just admit it — independent films are trendy.  Contemporary independent films have, to a large extent, become the new mainstream.  The earnest film students who had a Sundance hit are now going to Hollywood to make the next Benjamin Button.  Sundance is just ShoWest with more facial hair.  However, the old school grindhouse will never sell out because it no longer exists.  It was destroyed by the morality police before it could sacrifice its soul.  While an independent filmmaker is just a director who will eventually grow up and break your heart, the great Grindhouse films are frozen in time, too sordid to ever be corrupted.  The Mainstream will never embrace the Grindhouse and for that reason, the Grindhouse will always be the ultimate statement of freedom. 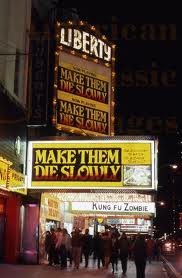