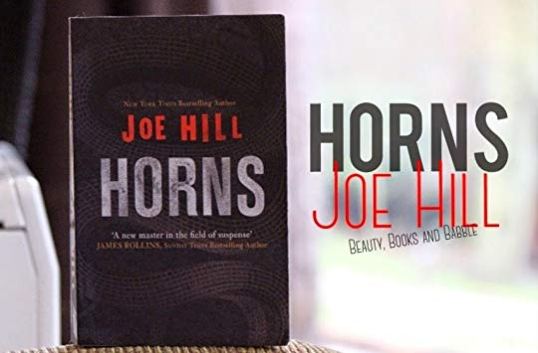 Horns.  What if you woke up and realized? Gee Whiz, I’m a demon! Well, that’s exactly how it was for Ig Perrish in Horns.  One day he was the pariah of his town because everyone believed he murdered his girlfriend and the next day he’s got budding horns with magical demon powers!

Ig is loathed by everyone for being a rapist and murderer.  There was only one problem: he didn’t do it.  The lab that would’ve exonerated him with DNA evidence caught fire, leaving him as the likely suspect, but no physical evidence to convict or exculpate.  His town and greater world hates him forever.

The horns start growing out of his head and give him powers to cause people to indulge and confess their darkest desires.  When he uses the horns, people can see the horns, when he’s done, they’re no longer visible. He goes through the town getting people indulge and confess.  He slowly realizes that xxxxxxxx was the killer.  Ha! No spoilers! The killer figures out that Ig has discovered his identity so they begin a cat and mouse game that goes all the way to the climax.

The book elicits a visceral response because it deals with the key concepts of human existence: Betrayal, love, revenge, and envy.  There are quite a few of the other deadly sins on display in the book as well.  The only knock that I give the book is that it really obvious very early on who the real killer is.  Nope, still not spoiling!

Is it worth reading? Yes. There is also a very fine audiobook with a voice actor  who does a very good job.  I highly recommend that as well.  You can check out the trailer review for Horns by Arleigh here!

Happy Horrorthon! With all the streaming services that I review, you’d think one of them would comp me for a month! Feel bad for me… What do you get when you mix: Religious ferver, sacrifice, cannabalism, a soon to be baby daddy, a really skinny dirty kid/oracle, a dog, alien influenced grass, and A LOT of REALLY stupid choices? Yep, you get “In the Tall Grass”.  This sounds really convoluted, but the tall grass is just that, but it’s also evil or controlled by an alien spaceship.  I’m guessing spaceship.  The story is basically Tommyknockers, but without any inventions and far less math.

Let me explain, Becky is unmarried, pregnant by a musician of sorts, and on her way to give up her baby to a family in San Diego.  Cal, her brother, is driving her cross country to do it. Why are they driving and not flying?  I don’t really know because the adoptive family would’ve definitely paid for a flight, but the adoptive parents make remote bad choices like everyone else in this story.  Let’s call this Bad Decision #1.  They decide to stop and they hear a boy yelling for help who is purportedly lost in the tall grass and needs emergency services.  Becky and Cal do not have EMS training, supplies, or even a compass- so they decide to enter the tall grass because they are stupid..really.  This is Bad Decision #2.  Really what did they think that they would do other than get lost?  They didn’t even think to call the police first! The police by the way would’ve said DON’T GO IN THE GRASS or pay a lot for that muffler.  The two of them rapidly realize that they are lost and not really in normal grass.

Later, the soon to be Baby Daddy- Travis- shows up at the cornfield.  He finds his girlfriend’s abandoned car.  It’s been there a while.  Does he call the police? Nope.  Now, I get some folks want to be their own first-responder and that’s respectable if you are basically competent.  Travis is not call police – Bad Decision #3. Travis then decides to also trounce around in the grass …. and gets lost. Bad Decision #4.

Travis finds Tobin the boy that called Becky into the grass and he knows A LOT about everyone: Travis, Becky, Cal, and all the other people in the grass. Yes, there is another family in there, BUT the dad in the family has gone full on EVIL.  That man is Ross (Patrick Wilson).  Ross was a normal person until he went into the grass and touched the monolith rock at the grass maze’s center.  The rock tells you to do things like how to get out of the grass, how to smash your wife’s skull – yep that happened, and whether or not Keto is just plain bullshit.

I’d like to take a second to write about Patrick Wilson’s performance. I liked it. Granted, I’m a fan of his work, but it was fun to see him play a villain. He had the phony real estate thing down and he could really turn up the rage. Also, his character was the only one not to make stupid choices.

The story shifts into a cat and mouse game of Ross hunting Becky and the rest of the people down to kill them over and over again.  Over and over again? Yes, there’s a time loop created by the rock.  So, you get lost in the grass a lot and killed a lot by Ross.  Bummer.  Their only hope is to kill Ross and stop the cycle. Will they kill Ross? Will they remain in the tall grass? Will I get up to benching 315Lbs (142 Kg)?

Is this movie worth watching? Well…the constant bad decisions really make it hard to sympathize with the characters.  I feel like the grass could’ve been more choosy or maybe the grass is a rescuer alien entity likes chaos like ALL of my ex-girlfriends.  The movie also really reminded me of Cube and it turns out it was written by Vincenzo Natali – the writer and director of Cube. Well, it basically was Cube meets evil Field of Dreams.  What is old is new again and again and again…wait I just wondered into some grass. No…wait, it’s just the kitchen. Do you want anything as long as I’m up?

For all you Stephen King nerds there were some Easter eggs In The Tall Grass, See Below:

The kids of the Harry Potter film franchise have all gone their separate ways. Some have moved on to taking smaller roles. Others have begun to take on roles that tries to rehabilitate their image from just being a Harry Potter actor. Emma Watson has had some success in redoing her post-Potter image. Yet, it’s the “Chosen One” himself who looks to really be going with as many left-field film role choices since the end of the franchise.

Daniel Radcliffe has been taking some interesting risks with his post-Potter career. Even before the franchise was over he had begun working on redoing his image. Whether it was doing the stage play Equus or taking on a horror film role with the gothic horror The Woman in Black, Radcliffe seems more than willing to leave his Potter days behind him.

The first trailer from the film adaptation of the Joe Hill penned dark fantasy Horns has now arrived. We see brief glimpses of Radcliffe in the title role with the proverbial horns that becomes the center of the film’s plotline.

Time will tell if Horns will be another notch in making Daniel Radcliffe less the Potter-kid and ore the talented actor he’s turning out to be.

Horns will be making it’s presence know this Halloween 2014.

Continuing TSL’s look back at the year that was, here’s my 12 favorite novels of 2013!

(And yes, you should read them all.)