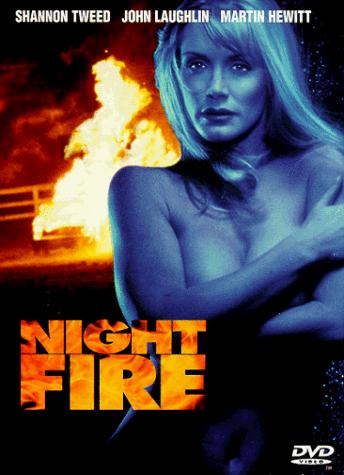 Night Fire is yet another 90s neo-noir starring Shannon Tweed.

In this one, Tweed plays Lydia.  Lydia is a work-obsessed millionaire who is unhappily married to Barry (John Laughlin).  Lydia and Barry’s sex life has come to a halt.  Lydia wants romance.  Barry wants to tie her up in bed and run a knife over her body.  Even though they have retreated to an isolated ranch house to try to fix their marriage, Lydia simply cannot bring herself to leave her work behind.

One day, while Barry is attempting to drown Lydia in the hot top, two drifters suddenly show up and claim that they’re having car trouble.  Cal (Martin Hewitt) and Gwen (Rochelle Swanson) are wild and uninhibited and everything that Lydia is not.  Lydia is uncomfortable with the idea of them staying at the house while Barry just wants to watch the two of them have sex.  Eventually, the expected mate swapping does occur but there’s a twist.  Barry hired Cal and Gwen to show up at the ranch and help him turn on his wife.  But it turns out that Barry has another, more sinister motive for wanting Cal and Gwen to spend the weekend.

Night Fire is typical of the type of films that used to show up on late night Cinemax.  The plot is mostly just an excuse to get everyone naked and most viewers will be able to see the big twist coming from a mile away.  From the very first scene, it’s obvious that Barry is not to be trusted.

On the plus side, Night Fire features one of Shannon Tweed’s best performances.  Tweed, who has always been a better actress than most critics give her credit for being, gives a smart and believable performance as Lydia.  The script often forces Lydia to do things that fly in the face of logic and it seems to take her forever to figure out that there’s something strange going on.  Lydia would probably seem unbearably daft if she wasn’t played by Shannon Tweed, who is capable of keeping the audience on her side even when she’s playing a role that, on paper, shouldn’t make any sense.  Tweed is smart enough not to play Lydia as being frigid but instead as someone who is just frustrated that her immature husband has invited two complete strangers to spend the weekend with them.  Rochelle Swanson and Martin Hewitt are impressive as the two drifters while John Laughlin is sabotaged by dialogue that reveals him to be untrustworthy from the first minute that he shows up.

Night Fire may not be perfect but it should keep fans of 90s-era Shannon Tweed happy.