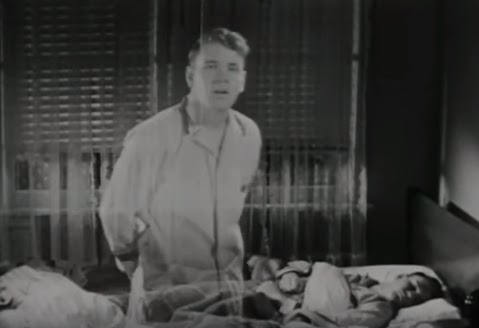 No, actually, that’s not a ghost.  That’s George’s conscience, who apparently leaves George’s body while George is asleep and tells strangers all of the sordid details of George’s home life.  Hmmm …. actually, that sounds scarier than a ghost.

Anyway, George is the anti-hero of the 1954 educational short film, The Griper.  George’s problem can be found right in the title.  He’s a teenager who complains about everything and he’s ruining high school for not only his classmates but for his teachers as well!  George isn’t happy during the basketball game.  George isn’t happy about his class assignment.  Even when his only friend, Betty, tries to show him a cute cartoon, George snaps at her.

George’s problem, of course, is that he was born 60 years too early.  If he had been born several decades later, he could have just joined twitter and then he could spend all day cancelling people and getting all of the likes and retweets that come along with being a judgmental jackass.  But sadly, George is a teenager in the 50s and he’s expected to be a lot more positive.

Personally, I think everyone in the film’s being a bit too judgmental of George.  I mean — yes, he’s a jerk.  And yes, I would probably avoid him because I love snark but I hate negativity.  But if George is always in a bad mood, that’s his right!  He can always make new friends or pursue a career as a film critic.

George is going to be alright.

This short film was directed by Herk Harvey.  Harvey made a career out of doing short films like this but horror fans will always know him as being the director of the incredibly influential Carnival of Souls.  We’ll be watching that movie later this month but for now, enjoy watching George isolate himself while destroying everyone else’s happiness and be sure to ask yourself,

“What would you do?”