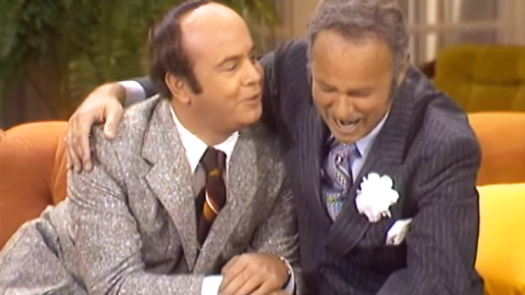 If comedy is a gift, then Tim Conway was America’s Santa Claus, delivering bags full of laughter directly into our homes for over fifty years. The cherubic Conway, who died May 14 at age 85, was mainly known for his television work, but also starred in films, on stage, and in the home video field, making him a true Renaissance Man of Comedy.

Young Tim got his start in his hometown of Cleveland, not exactly a hotbed of humor (with apologies to Jim Backus, Kaye Ballard, and British transplant Bob Hope ), writing and appearing in skits with local TV personality Ernie Anderson during breaks in a morning movie show. Anderson himself would later gain fame as a horror host (Cleveland’s Ghoulardi) and  a network announcer, ‘The Voice of ABC’ (“Tonight on The Loooo-ve Boat….”).

Comic actress Rose Marie, on a cross-country tour promoting THE…