What a week.  We lost two cultural icons, the director John Singleton and the actor, Peter Mayhew.  I have to say that I was surprised and kind of touched to discover that, after starring in one of the most successful films of all time, Peter Mayhew ended up settling down in Boyd, Texas.  I’ve driven through Boyd, it’s a nice little town and, from what I’ve heard, Peter Mayhew was a nice man.

On a happier note, Happy Cinco De Mayo, everyone!  And, on a purely personal note, I feel like I’m back.  After spending last month struggling to get anything written, I feel like I have finally woken up and I’m ready to enjoy the rest of the year!  That’s the power of Avengers: Endgame, I suppose.

Have a great week everyone!  Here’s what I watched, read, and listened to this week:

Have a great week everyone!

Despite what many people seem to believe, Cinco De Mayo is not the same thing as Mexican Independence Day (that’s celebrated on September 16th).  Instead, Cinco De Mayo commemorates the Mexican army’s victory over the French at the Battle of Puebla.  That battle was fought on May 5th, 1862.  That was a 157 years ago, today.

Cinco De Mayo is a pretty big deal down here in Texas and some of my fondest (and, in some cases, haziest) memories are related to this date.  I especially like to remember May 5th, 2007, in which I spent several hours with a group of my closest and dearest friends, sitting out on the roof of a friend’s house, watching fireworks explode over our heads.  That was a wonderful night, even if someone did eventually end up falling off the roof.  (Don’t worry, he not only survived but he’s now got a pretty good job in D.C. and he’ll probably be your congressman someday.)

In honor of the day, here are four shots from four of my favorite Mexican films…. 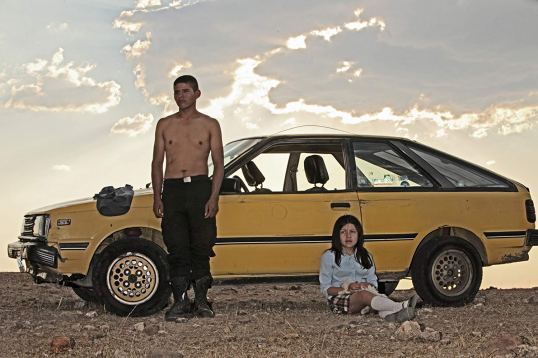 We’ve talked about fellow Minneapolis “product” Peter Faecke in this column before, but it’s never a bad time to do so again, and I’ve decided that “never a bad time” is now. All the following comics can be ordered up from Pete’s online store, charming called “The Stink Hole.” Your link :https://thestinkhole.storenvy.com/

The Bartbarian In : Learning To Unlearn is a bizarrely contemplative slap-dash mini printed on suitably gaudy yellow paper that features a protagonist who’s a mash-up of Bart Simpson and a homoerotic take on Conan the Barbarian (then again, it’s Conan we’re talking about, so maybe the “homoerotic” part is redundant) traversing a lonely physical and psychic wasteland in search of his adversary/potential friend, Thrillhouse. When they meet, will battle ensue, or something altogether more rewarding and satisfying? Treads similar thematic ground to Faecke’s Pardners, minus the obvious performance anxiety parallels. A nice throwback to the…

When last we saw him at the end of episode eleven of DC Universe’s original streaming series Doom Patrol, Joivan Wade’s Vic Stone was in a bad place — metaphorically and literally. His increasingly-mechanized body and mind betraying him, he made the drastic decision to part company with his operating system, known as GRID, but any monetary respite he hoped to gain from such an action was quickly dashed when he found himself captured by The Bureau of Normalcy and imprisoned at their top-secret research/torture facility nicknamed The Ant Farm.

Not that this latest installment, entitled (appropriately enough) “Cyborg Patrol,”gives any concrete reason as to how and why the place found itself saddled with such a moniker, unlike the Grant Morrison/Steve Yeowell comic the idea was lifted from, but the principle nature of the operation remains true to its printed-page antecedent — even if it’s located nowhere near the…


The story that began in the video for In This World continues in the video for Sunday (The Day Before My Birthday).  The aliens are back!  This time, they have a little bit more success getting noticed.  In fact, you could almost say that they have too much success.  Can you blame them for deciding to go back to their home?

As for the song, I’ve always thought it was one of Moby’s best.  It’s also one of his saddest songs, full of regret and melancholy.  The fact that Moby was born on September 11th, 1965 undoubtedly has something to do with that.  It’s interesting that such a sad song could inspire such an enjoyable video.

Just keep in mind that this video, featuring aliens getting their own television series, was released long before Keeping Up With The Kardashians.  So, you can consider this to be a prophetic video, if you are so inclined.