The end, as they say, is nigh.

It’s been quite the first season for the DC Universe original streaming series Doom Patrol, has it not? And in the next-to-last (and fourteenth) episode, appropriately titled “Penultimate Patrol,” we’re treated to the return of old friends (Danny The Street) and old foes (Tommy Snider’s cringe-worthy, and now apparently reformed, Beard Hunter), but by and large the focus here is on the team — and, yes, now it really is a team — and the culmination of their own personal journeys, quite literally.

Yes indeed, everything “showrunner” Jeremy Carver has been building toward reaches a customarily-bizarre crescendo here, with Alan Tudyk’s Mr. Nobody being treated/subject to some revelatory period-piece “backstory” of his own here (superbly realized by director Rebecca Rodriguez) before placing each of our “Doom Patrolers” at the precise moment before the accidents/incidents that changed their lives and offering them, in…

In Race For Your Life, Charlie Brown, the entire Peanuts gang (including Snoopy and Woodstock) go to camp for the summer and run afoul three bullies and a really mean cat.  Along with all the other camp activities, there’s also a rafting race.  With no adult supervision, the boys (led by Charlie Brown) end up one raft, the girls (led by Peppermint Patty) end up on another raft, Snoopy and Woodstock build their own raft, and the bullies try to sabotage the three other teams.  While Charlie Brown tries to find his voice as a leader and Peppermint Patty runs her raft by having every decision determined by secret ballot, Snoopy and Woodstock explore the wilderness.

Though Race For Your Life, Charlie Brown was released theatrically in 1977, it was made by the same team responsible for the Charlie Brown TV specials and it feels more like an extended TV show than an actual movie.  It’s still a cute production, though, especially if you’re already a fan of Peanuts.  The animation is primitive by today’s standards but it has a retro appeal and Charlie Brown is as likable as he is wishy-washy.  Not surprisingly, Snoopy and Woodstock are the film’s MVPs.  From the minute that they drive up on their motorcycle, Snoopy and his friend steal the movie.  Because it lacks both the spiritual and the philosophical themes that we usually associate with Peanuts, the movie’s not as memorable or poignant as the holiday specials and some of my favorite characters, like Linus and Lucy, don’t have much to do.  I was especially disappointed that Lucy stayed in the background and let Peppermint Patty run the girl’s team.  Whatever happened to the Lucy who could always convince Charlie Brown to kick the football?

In the end, the important thing is that the movie has a good message.  Bullies are losers, nothing’s more important than friendship, and the best team wins.

Who was the Spider?

In the 1930s and the 1940s, The Spider was toughest and most ruthless pulp action hero around.  His real name was Richard Wentworth and he was a millionaire who, having served in World War I, was determined to wage war on crime back home.  What distinguished the Spider from the other pulp heroes of the day was his brand of justice.  He was just as willing to kill as his opponents and a typical issue of The Spider featured thousands of casualties.  Though each story may have been different, all ended with Wentworth killing the villain and stamping the body with his “spider mark.”

Published on a monthly basis by Popular Press, The Spider ran for 10 years, from 1933 to 1943.  If not for World War II and the resulting paper shortage, his adventures probably could have run for another decade. 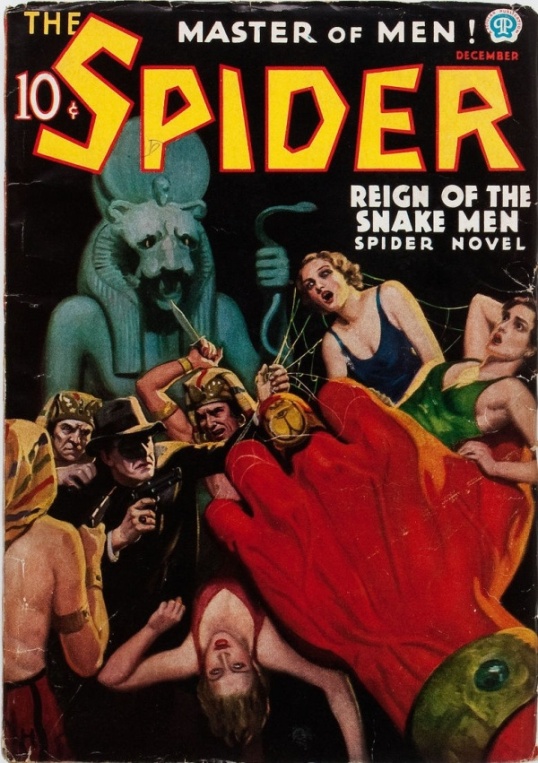 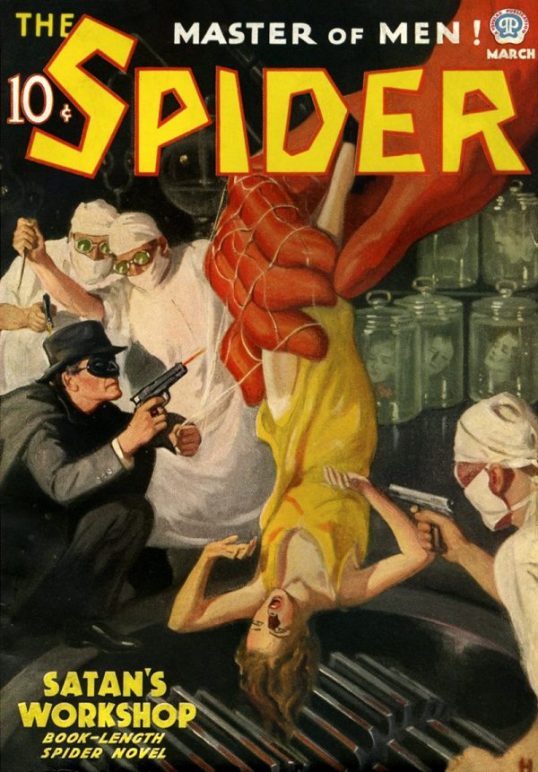 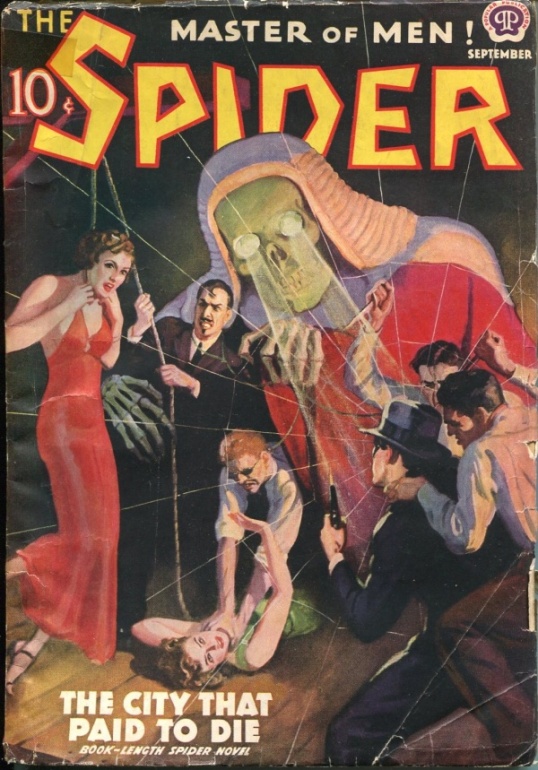 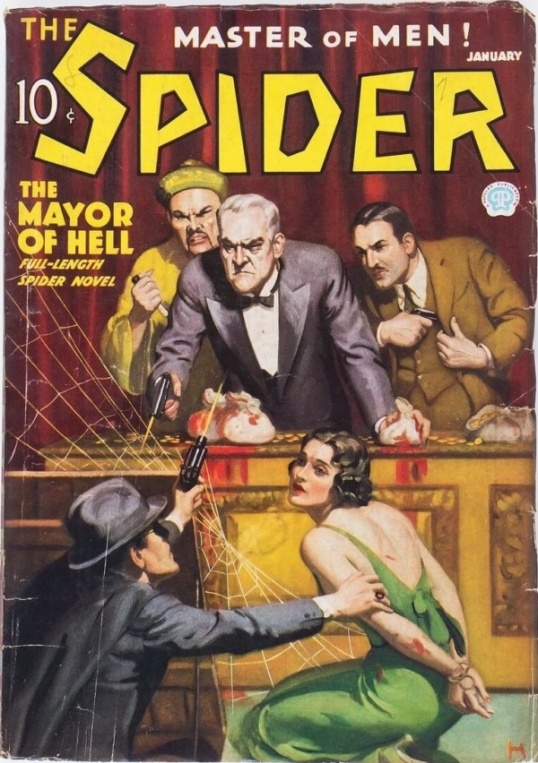 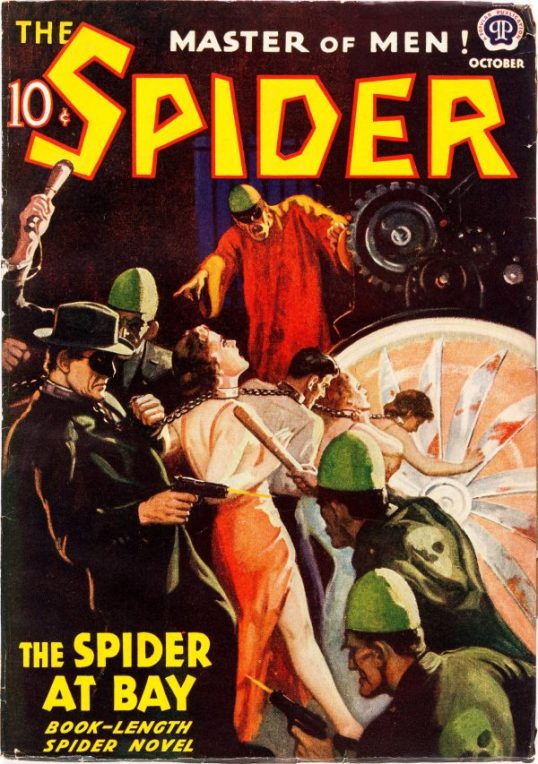 This next batch of covers were all done by Rafael DeSoto, who brought his own unique style to the Shadow’s violent adventures: 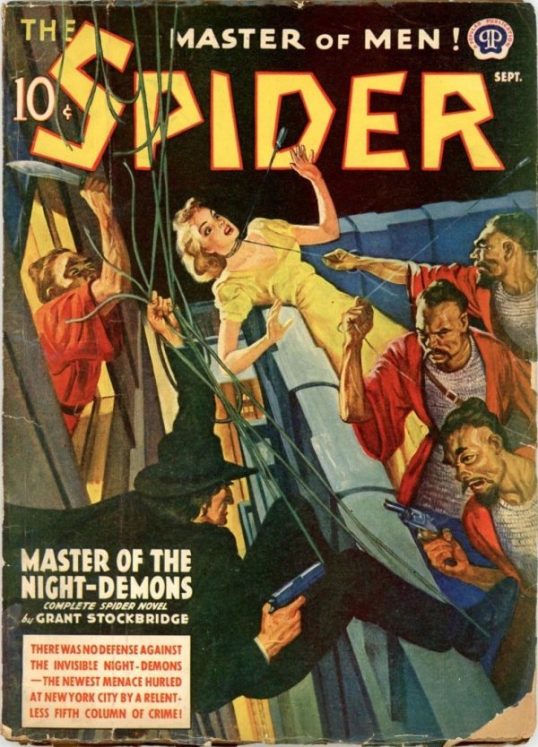 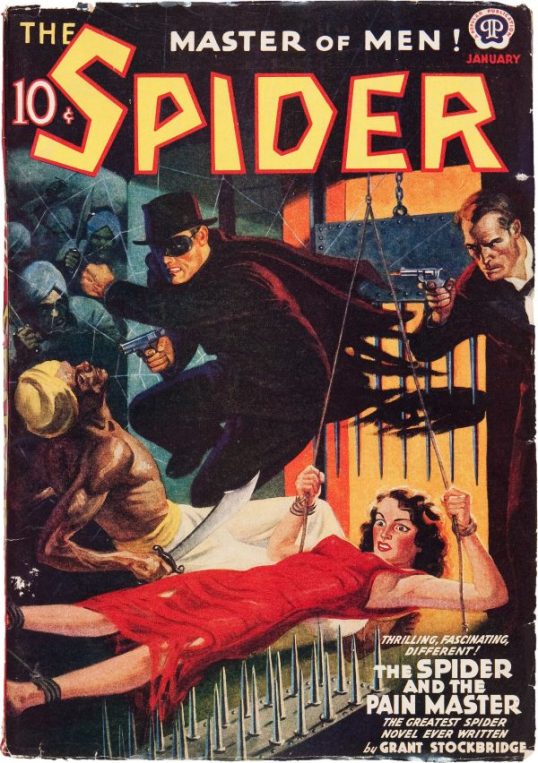 The covers below have never officially been credited to either Howitt or DeSoto.  They look like they were done by DeSoto to me but I don’t know for sure: 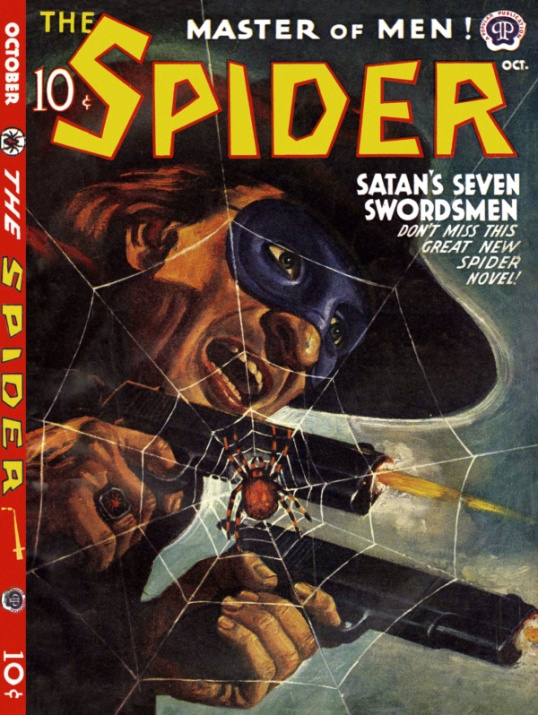 In the 1970s, Pocket Books reprinted four of The Spider’s adventures.  The covers of those paperbacks were done by Robert Maguire and, as you can tell by looking below, they attempted to bring The Spider into the “modern” age.  Steve Holland served as the model for Maguire’s version of The Spider: 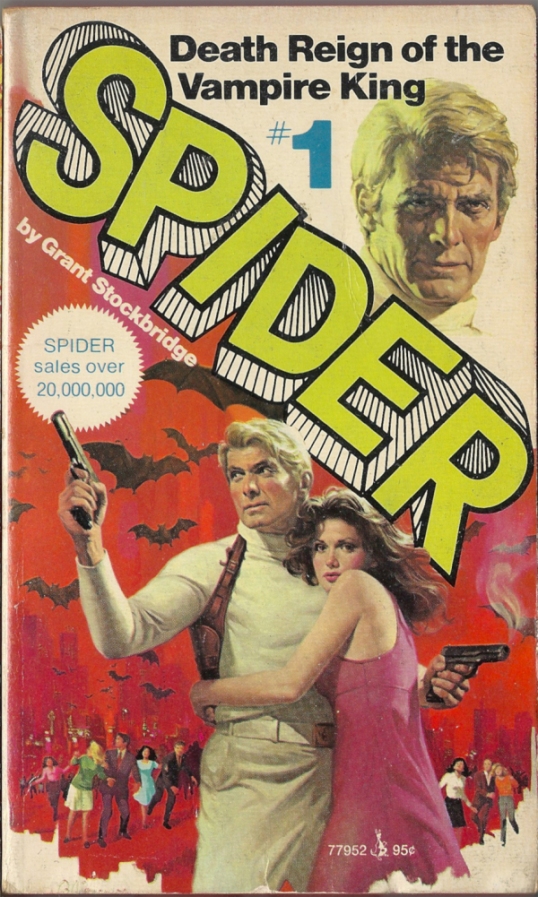 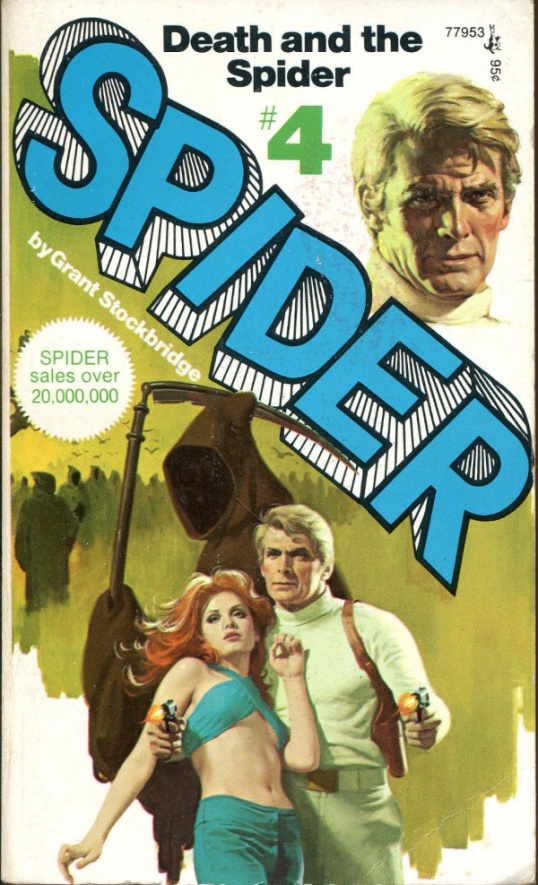 New Spider novels are still being written to do this day and publishers continue to still occasionally reprint The Spider’s adventures.  Meanwhile, original issues are widely-sought after by collectors.  The Spider lives on!


What if Hamlet was a hipster douchebag?

That appears to be the question at the heart of the 2000 film adaptation of William Shakespeare’s most famous play.  In this adaptation, a young Ethan Hawke plays a Hamlet who is no longer a melancholy prince but who is instead a film student with a petulant attitude.

As you probably already guessed, this is one of those modern day adaptations of Shakespeare.  Denmark is now a Manhattan-based corporation.  Elsinore is a hotel.  Hamlet ponders life while wandering around a Blockbuster and, at one point, the ghost of his father stands in front of a Pepsi machine.  While Shakespeare’s dialogue remains unchanged, everyone delivers their lives while wearing modern clothing.  It’s one of those things that would seem rather brave and experimental if not for the fact that modern day versions of Shakespeare have gone from being daring to being a cliché.

At the film’s start, the former CEO of the Denmark Corporation has mysteriously died and his brother, Claudius (Kyle MacLachlan), has not only taken over the company but he’s also married the widow, Gertrude (Diane Venora).  Hamlet comes home from film school, convinced that there has been a murder and his suspicions are eventually confirmed by the ghost of his father (Sam Shepard).  Meanwhile, poor Ophelia (Julia Stiles) takes pictures of flowers while her brother, Laertes (Liev Schreiber), glowers in the background.  Polonius (Bill Murray) offers up pointless advice while Fortinbras (Casey Affleck) is reimagined as a corporate investor and Rosencrantz (Steve Zahn) wears a hockey jersey.  Hamlet spends a lot of time filming himself talking and the Mousetrap is no longer a player but instead an incredibly over-the-top short film that will probably remind you of the killer video from The Ring.

I guess a huge part of this film’s appeal was meant to be that it featured a lot of people who you wouldn’t necessarily think of as being Shakespearean actors. Some of them did a surprisingly good job.  For instance, Kyle MacLachlan was wonderully villainous as Claudius and Steve Zahn was the perfect Rosencrantz.  Others, like Diane Venora and Liev Schreiber, were adequate without being particularly interesting.  But then you get to Bill Murray as Polonius and you start to realize that quirkiness can only take things so far.  Murray does a pretty good job handling Shakespeare’s dialogue but that doesn’t change the fact that he’s totally miscast as the misguided and foolish Polonius.  One could easily imagine Murray in the role of Osiric.  Though it may initially seem a stretch, one could even imagine him playing Claudius.  But he’s simply not right for the role of Polonius.  Murray’s screen presence is just too naturally snarky for him to be convincing as a character who alternates between being a “tedious, old fool” and an obsequious ass kisser.

Considering that he spends a large deal of the movie wearing a snow cap while wandering around downtown Manhattan, Ethan Hawke does a surprisingly good job as Hamlet.  Or, I should say, he does a good job as this film’s version of Hamlet.  Here, Hamlet is neither the indecisive avenger nor the Oedipal madman of previous adaptations.  Instead, he’s portrayed as being rather petulant and self-absorbed, which doesn’t necessarily go against anything that one might find within Shakespeare’s original text.  Hawke’s not necessarily a likable Hamlet but his interpretation is still a credible one.

At one point, while Hamlet thinks about revenge, we see that he’s watching Laurence Olivier’s version of Hamlet on television.  There’s Olivier talking to Yorick’s skull while Hawke watches.  It’s a scene that is somehow both annoying and amusing at the same time.  On the one hand, it feels rather cutesy and more than a little pretentious.  At the same time, it’s so over-the-top in its pretension that you can’t help but kind of smile at the sight of it.  To me, that scene epitomizes the film as a whole.  It’s incredibly silly but it’s so unapologetic that it’s easy to forgive. 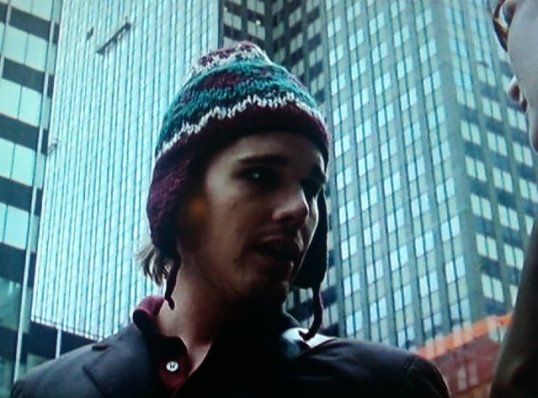 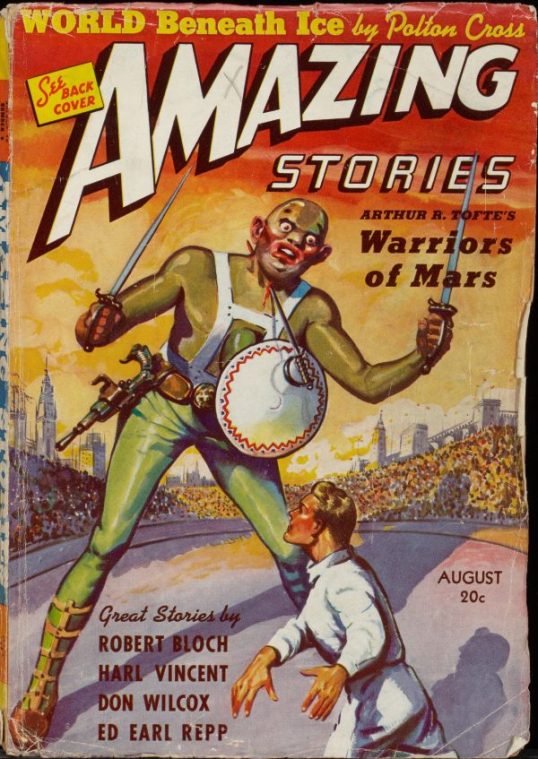 
Uh-oh!  It appears that the Black Keys now hate each other!  Well, it happens to the best of us.

Still, will they be able to set aside their differences and continue to make great music?  Will a spiritual retreat help to rebuild their working relationship?  Watch today’s music video of the day to find out!