As the central character of the Lifetime film, Homekilling Queen, Whitney (played by Kaitlyn Bernard) only wants one thing.  She wants to be homecoming queen!  And really, why shouldn’t she be?  She believes that she’s the most popular girl in the entire school, despite the fact that no one actually seems to like her.  Add to that, she’s rich and serving as homecoming queen is practically a family tradition!  Her mother, Connie (Ashley Jones), was homecoming queen.  So was her grandmother, Evelyn (Jennifer Dale).  Both Connie and Evelyn are determined that Whitney will be the next homecoming queen.  Connie’s even taught her how to do a proper pageant wave.

How determined is Whitney?  She’s so determined that, over the summer, she even murdered one of her rivals!  That’s determination!

Still, things are never quite as easy as they should be.  For instance, Whitney may think that she has the election all sewn up but Natasha Hart (Kayleigh Shikanai) feels differently.  Natasha is sick of the school being run by mean girls like Whitney.  Natasha decides that she’s going to run against Whitney!

At first, Whitney is dismissive of Natasha and her campaign.  Everyone knows that Natasha had a drug problem in the past.  Apparently, she drove her car into the bleachers while high on oxy.  (This automatically makes Natasha cooler than anyone I went to high school with.)  However, Natasha is now clean and sober and looking to make the world a better place.  To Whitney’s shock, Natasha starts to pick up support for her campaign.  Even after Whitney sends everyone in school a nude picture that’s been photoshopped to look like Natasha, Natasha’s campaign continues to build momentum.

Well, if photoshopped nudes won’t knock Natasha out of the race, how about planting drugs on her?  And if Whitney has to murder someone to get those drugs …. well, that’s politics.

It’s an interesting film.  On the one hand, you’re supposed to dislike Whitney, Connie, and Evelyn.  And it is true that Whitney does commit a murder or two.  On the other hand, they’re all so determined to win that homecoming election that you can’t help but admire the level of their dedication.  If it means giving students gifts to win their vote, Whitney’s willing to do it.  If it means seducing the school’s creepy principal to keep her daughter from being disqualified, Connie’s going to do just that.  Kaitlyn Bernard, Ashley Jones, and Jennifer Dale all really dig into their roles and do a great job at capturing the unhinged obsessiveness of their characters.  Jennifer Dale is especially a marvel as the coldy pragmatic Evelyn.  When she glares at anyone who would stand in her granddaughter’s way, you’re left with no doubt that Evelyn is not someone who you would want to mess with.  She’s scary but you would definitely want her to have your back in a confrontation.

Also doing a good job were Kayleigh Shikanai and Krista Bridges, who were perfectly cast as mother and daughter.  Every scene between them rang true and, watching them, I was reminded of the way that my mom and I would relate to each other.  They brought an unexpected sense of reality to a film that could have otherwise just been an enjoyably over-the-top melodrama.

Homekilling Queen was a lot of fun and, given the number of times that Lifetime rebroadcasts all of their films over the year, it’s one to keep an eye out for.

And so the moment has come : the thirteenth episode of the DC Universe streaming series Doom Patrol, appropriately titled “Flex Patrol,” finally introduces us, in proper fashion, to Grant Morrison and Richard Case’s (and, some would argue, Frank Quitely’s) so-called “Man Of Muscle Mystery,” Flex Mentallo, after several hints, and an amnesia-riddled debut last week. Was the moment worth waiting for?

The quick answer to that is “yes,” not least because Devan Chandler Long really sinks his teeth into the role of the meta-human molded after Charles Atlas’ “Hero Of The Beach,” but also because script-writers Tom Farrell and Tamara Becher-Wilkinson imbue his backstory with a generous helping of legit pathos that sees him go from “Ant Farm” refugee to ebullient returned champion to unhinged vehicle of pure rage (and not without good reason) by the time all is said and done.

Except, ya know, nothing is said…

You may not have known — I certainly didn’t, and I pride myself on being something of an expert on movie minutiae — that William Wyler’s 1942 Oscar-winning cinematic classic, Mrs. Miniver, was followed by a sequel, The Miniver Story, in 1950, but that’s okay : Michael Aushenker did, and he decided that one lame follow-up probably deserved another,

Mind you, his 2016 self-published comic, Professor Mrs. Miniver, is intentionally lame, and that makes all the difference in the world. Aushenker hails from the “batshit-crazy slapstick” school of cartooning, and as such, his sensibilities are pretty well right in tune for a project of this sort — which only makes sense, I suppose, given that he’s the one who came up with it, amirite? 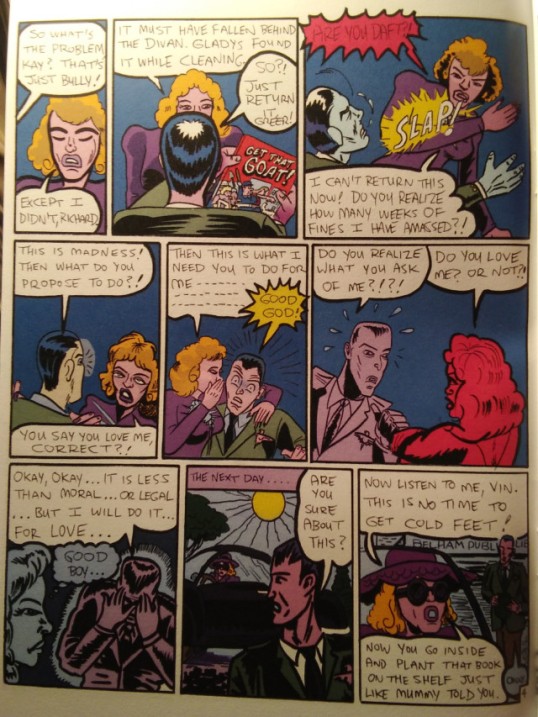 Well, yeah, I am — it happens sometimes — but the laughs in this one, plentiful as they are, may fall just a…

She managed to survive starring in one of Steven Soderbergh’s worst films and has gone on to become one of my favorite action movie stars.  Though she may be best-known for her supporting roles in Fast & Furious 6 and Deadpool, Gina Carano’s best work is usually found in an underappreciated genre films like In The Blood and Scorched Earth.  For me, there’s little that’s more empowering than watching Gina Carano single-handedly take down an army of mercenaries and evil-doers.

The trailer for Carano’s upcoming film features her doing what she does best.  This time, she’s a mother trying to rescue her child and it would appear that screen veteran Richard Dreyfuss is playing the bad guy.  Carano vs. Dreyfuss?  I wonder who will win that one.

Here’s the trailer for Daughter of the Wolf!

I know that I should probably be more excited about The Dead Don’t Die, the upcoming zombie comedy film from Jim Jarmusch.

I mean, after all, Jim Jarmusch has made some brilliant films and I enjoyed his take on vampires, Only Lovers Left Alive.  Add to that, the film is full of wonderful actors, people like Adam Driver, Bill Murray, Selena Gomez, Steve Buscemi, and Tilda Swinton.  And yet, for whatever reason, I can’t summon up much enthusiasm for The Dead Don’t Die.  Everything that I’ve seen about it so far just seems to add up to one big “meh.”

Maybe it’s just the fact that there’s seems to be a new zombie movie every week.  Seriously, zombies were a lot more interesting before they went mainstream.

Anyway, The Dead Don’t Die opened the Cannes Film Festival yesterday and the response so far has been rather lukewarm, if respectful of the fact that the film was directed by a very important filmmaker.  Reading the reviews, you get the feeling that it’s a film that the reviewers wanted to like more than they actually did.

To coincide with the Cannes premiere, here’s a new redband trailer!  You can watch it below.  Maybe it’ll leave you with a bit more enthusiasm than it does me.

The Dead Don’t Die comes to theaters on June 14th.


As I’ve mentioned on this site before, I was introduced to the music of Adi Ulmansky by my best friend, Evelyn, and she quickly became one of my favorite artists.  This is an acoustic version of ADI’s song, Bombs Away, which was filmed for and by Tel Aviv TV.