Dieter Dengler (Christian Bale) has been obsessed with flying ever since he was a child in Germany.  Towards the end of World War II, while his native country burned around him, Dieter would stare up at the skies and watch the American planes fly overhead and he knew that was not only what he wanted to do someday but also who he wanted to do it for.  Jump forward two decades, to 1966.  Dengler is now a lieutenant in the U.S. Air Force, an always smiling optimist who is considered to be something of a wild man.  When Dengler is reported as having been shot down over Loas, his fellow pilots are not only convinced that Dengler survived but that he’ll also eventually escape captivity.  Why?  Because they now Dieter Dengler is not the type to give up.

And they’re right.  Dengler not only survives the crash but he also survives in the wild.  After growing up in the rubble of Germany, Dengler is confident that he can survive anything.  Even when he’s finally captured by communist rebels, Dengler remains optimistic that he’ll make it back home.  When he’s told that he can go free if he signs a statement denouncing the United States, he refuses.  Dengler’s not going to turn on the country that allows him to fly.  Dengler soon finds himself being held in a POW camp with four other men, including two other Americans (played by Jeremy Davies and Steve Zahn).  The guards are determined to break Dengler but he’s just as determined to escape.  Hearing that it’s impossible to do so only makes Dengler more determined.

The story of Dieter Dengler and his eventual escape from captivity was originally told, by Dengler himself, in Werner Herzog’s 1997 documentary, Little Dieter Needs To Fly.  That Herzog saw Dengler as a kindred spirit is evident in the fact that, 9 years after the documentary, Herzog again told Dengler’s story in the 2006 film, Rescue Dawn.

On the face of it, a story about a group of Americans escaping from a POW camp might sound like an unlikely topic for a Werner Herzog film but it doesn’t take long for Herzog to put his own distinctive stamp on the project.  As played by Bale, Dengler is another one of Herzog’s obessessive heroes.  Dengler’s obsession is not just with flying but also with being free.  For Dengler, that’s what being an American means and that’s why he would rather be tortured than sign a simple piece of paper denying the existence of that freedom.  Much as how Grizzly Man portrayed Timothy Treadwell as being a man who would rather be eaten by a bear than live a life that’s been dictated by others, Dengler would rather suffer than betray his adopted country.

Rescue Dawn also centers around another common Herzog theme, the pitilessness of nature.  Watching Dengler trying to make his way through the jungle, we’re reminded that nature will always win in the end.  In Herzog’s world, neither nature nor the universe as a whole has any ideology.  Long after every warrior has died, the film tells us, nature will still be there.  The one thing that the POWs and their captors have in common is that they’re all at the mercy of the chaos of nature.  Just as the jungle threatens to swallow up Dengler and the other prisoners, their captors are slowly starving to death due to a drought.  As filmed by Herzog, the jungle is both beautiful and overwhelming.  Even at the film’s triumphant conclusion, it’s hard not to feel that, for all the planning, Dengler’s escape and survival was due to the random chaos of the universe.  How much can we control and how much must we simply leave up to the whim of nature?

Bale, Davies, and Zahn all give excellent performances and Herzog keeps the story moving quickly.  It’s probably one of his most emotionally accessible films and it’s impossible not to shed a tear at that final scene.  That said, I’d be remiss if I didn’t acknowledge that there’s a good deal of controversy about the way that Rescue Dawn portrays Gene DeBruin, the POW played by Jeremy Davies.  The film often contrasts Dengler with DeBruin.  If Dengler is always hopeful and determined, DeBruin is portrayed as being unstable and unreliable.  However, by most accounts — including the one given by another one of the prisoners — DeBruin was actually the exact opposite of how he was portrayed in the film.  Instead of being selfish, he was a source of strength for the POWs and he actually refused to take advantage of a previous chance to escape because it would have meant abandoning the rest of the prisoners.  Herzog has said that he wasn’t aware of DeBruin’s heroism when he wrote and directed the film and that he now regrets the way that DeBruin was portrayed.  (DeBruin’s brother has said that Herzog refused to talk to the family while the film was in poduction.)  Rescue Dawn is a well-made and wonderfully acted film and it’s one that always brings tears to my mismatched eyes but, while watching it, it’s impossible not to regret the injustice that was done to Gene DeBruin. 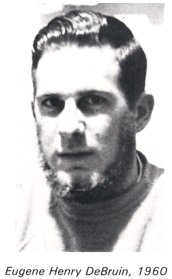