For tonight’s televised horror, we have the tenth episode of Night Visions!

Night Visions was an anthology show that aired in 2001.  Each episode featured two different stories and was hosted by Henry Rollins.

Our first story was directed by Thomas J. Wright and is called Hate Puppet.  It’s about a man who can’t figure out why everyone hates him.  In some ways, this story almost seems prophetic.  In 2001, I imagine it was shocking to think of someone suddenly being hated by complete strangers.  Today, we just look at that type of behavior and say, “Well, that’s 2017 for you…”

Our second story, Darkness, was directed by Ian Toynton and tells the story of a man who inherits a house but soon learns that maybe it would have been better if he hadn’t.

Like many anthology series, Night Visions was always an uneven show but I think these episode are always fun to watch in October.


A 1971 Belgian-Italian co-production, The Devil’s Nightmare opens with a sepia-toned flashback to the closing days of World War II.  A child has been born to the Nazi general, Baron von Rohnberg (Jean Servais) but after the Baron learns that the baby is female, he orders that she be killed.  It’s a brutally effective little opening, all the more so because there is no greater evil than a Nazi with money and a title.  As with many European horror films, the crimes and sins of Hitler cast a shadow over every scene of The Devil’s Nightmare.

Years later, like many Nazi noblemen, the Baron remains free.  He lives in his isolated castle, occasionally letting tourists stay for the night while he practices his experiments in the basement.  A reporter comes by and pays a steep price for refusing the Baron’s orders not to take any pictures.  When her body is found, she has a hoof-shaped burn on her arm.  The sign of the devil, we are told.

Meanwhile, a bus takes a wrong turn and gets lost.  The tourists on the bus are a typical collection of Eurohorror types: the greedy woman, the bitter old businessman who loudly proclaims his atheism, the fighting husband and wife, and, of course, Alvin (Jacques Monseau), the seminarian.  The tourists meet a strange man (Daniel Emilfork) who directs them to the Baron’s castle, where they can stay until the ferry arrives the next day.

As the tourists explore the castle and get to know the Baron (who shares the story of how his family came to be cursed), a storm develops outside.  And, finally, one last guest arrives.  Her name is Lisa Muller (Erika Blanc) and, over the course of the night, everyone in the castle will be tempted.

That said, this film belongs to Erika Blanc, who basically grabs hold of the movie and then dares anyone to try to take it away from her.  Thoughout the film, Blanc shifts from elegant to evil and back again and she makes it all look not only easy but totally natural as well.

Finally, The Devil’s Nightmare ends with a twist that you’ll see coming from a mile away but that doesn’t make it any less satisfying.

The Devil’s Nightmare is one of those films that seems to have been included in almost every “Classics of Horror” box set that Mill Creek has ever released.  So, you probably have a copy even if you don’t realize it!  Track it down, turn off all the lights, and watch. 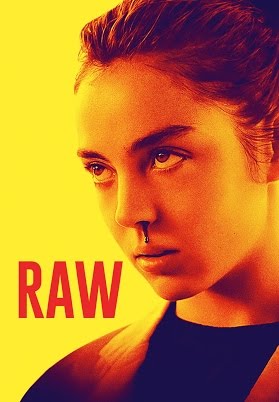 “The film so shocking that apparently some theater chains distributed barf bags to patrons as they entered the theater!”

When I first heard about that, I figured that had to be a PR stunt, proof that the 70s grindhouse ethos was still alive in 2017.  However, upon doing a little research, I came across several reports that some audience members actually had fainted and/or became physically ill while watching this French-Belgian cannibal film.  Apparently, Raw was just too raw for them.

Now, I have to admit that I may be jaded as the result of spending the last few years watching countless Italian horror films.  Whether the eating was being done by zombies or an undiscovered tribe in the Amazon Rain Forest, the Italians pretty much perfected the use of cannibalism of a plot device.  And, with its vibrant color scheme and its emphasis on the blood, guts, and muscles that lay directly underneath the skin, Raw certainly does feel like a bit of an homage to those old Italian films.  However, the film takes a rather clinical (though, at time, dryly humorous) approach to its subject.  In that way, Raw has more in common with the sleek body horror of early David Cronenberg than the films of Umberto Lenzi or Ruggero Deodato.

It tells the story of two sisters, both of whom are attending a demanding veterinary school.  At first, the two sisters might seem like opposites.  Justine (Garance Marillier) is the younger of the two.  She is driven to succeed and, as a result, has experienced little over the course of her short life.  She is not only a virgin but she is also a lifelong vegetarian.  She has never tasted meat, both literally and metaphorically.  She has an awkward crush on her roommate, Adrien (Rabah Naït Oufella), despite the fact that Adrien is gay.  Her sister, Alexia (Ella Rumpf), appears to be the wilder of the two.  The dynamic between Justine and Alexa is a familiar and it’s well-portrayed by Marillier and Rumpf.  Anyone who has a sister will recognize it.  Despite the strong bond that the two share, it’s obvious that a good deal of Justine’s drive is the result of feeling as if she has to make up for Alexia’s lack of direction.

Of course, Alexia and Justine are not total opposites.  In fact, they have one thing very much in common.  They both find themselves craving human flesh.  At the start of the film, Justine freaks out when, as part of a hazing ritual, she is splashed with blood and forced to eat a rabbit kidney.  It leads to her getting a nasty rash, the result of food poisoning.  However, as her father tells her, once an animal has tasted blood, it will never be the same again.  Soon, Justine is craving both meat and sex, which leads to everything from eating raw chicken to almost biting off a guy’s lower lip.  And, of course, there’s the time that Alexia accidentally cuts off her finger…

Raw is a movie that mixes cannibalism with a coming-of-age story.  Imagine Mona Lisa Smile if the cast ended up eating each other.  (Actually, that’s a terrible and inaccurate comparison.  I just liked the way it sounded.)

Yes, Raw is graphic.  If you can’t handle the sight of blood then maybe you shouldn’t watch Raw because Raw is drenched in it.  That said, for me, the scene that left me trembling was when Justine got a Brazilian wax.  Seriously, that had me screaming in shared pain…

Raw is a well-acted, well-directed, and often a rather audacious film.  For me, the most powerful part of the film is not the mix of flesh-eating and sexual awakening.  It’s the relationship between Justine and Alexia.  Garance Marillier and Ella Rumpf are totally believable as sisters and every detail of their relationship rings true.  You may not agree with some of the choices that the sisters make in the film but they all ring true.

I recommend Raw.  I’m sure some people will find it to be disgusting but, to me, this is a well-made and intelligent film that deserves to be seen.

Charlton Heston is Matthew Cormbeck, a driven archaeologist.  (Could an archaeologist played by Charlton Heston by anything other than driven?)  In 1961, he discovers the long-lost tomb of an Egyptian queen named Kara.  Ignoring both the birth of his daughter and the warning inscribed over the doorway, Matthew enters the tomb and discovers the mummified Kara.  At the same time, his stillborn daughter, Margaret, comes back to life.

18 years later, Cormbeck is a teacher at a British university.  He has since divorced Margaret’s mother and has married his longtime assistant, Jane (Susannah York).  Matthew is still obsessed with whether or not the Egyptians are taking proper care of the mummy and wants to bring it to England.  At the same time, Margaret (Stephanie Zimbalist) defies her mother and comes to England to meet her father.

Like Blood From The Mummy’s Tomb, The Awakening was based on Bram Stoker’s The Jewel of Seven Stars.  Unfortunately, The Awakening is never as good as Blood from Mummy’s Tomb and gets bogged down in the lengthy Egyptian prologue.  (Blood from The Mummy’s Tomb skipped over the first part of Stoker’s novel and started with Margaret already 18 and possessed.)  The Awakening tries to take a more cerebral approach than the Hammer adaptation but both Heston and Zimbalist are fatally miscast.  Especially in the Egyptian scenes, Heston grits his teeth and lets his ascot do most of the work.

We can’t have a proper ‘Halloween Havoc!’ without inviting Bela Lugosi to the party, now can we? After all, his 1931 hit DRACULA practically invented the horror movie as far as ‘talking pictures’ go. Both Bela and director Robert Florey were slated to work on producer Carl Laemmle’s next horror opus FRANKENSTEIN, but Laemmle wasn’t satisfied with their version, handing it over to James Whale, who hired a bit player named Boris Karloff to portray the monster of science, and the rest is history. Lugosi and Florey were instead given MURDERS IN THE RUE MORGUE, based on Edgar Allan Poe’s classic tale, to bring to screen life. This was the first of Bela’s “mad doctor” role, a part he would essay twelve more times in films of varying quality. 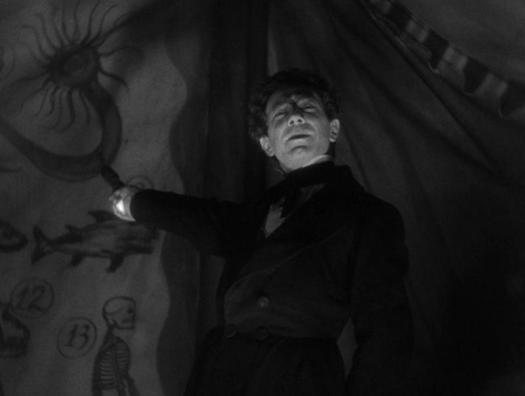 Today’s horror scene that I love comes from the classic 1945 film, The Picture of Dorian Gray.

In this scene, Gray (Hurd Hatfield) finally strikes back at the picture that, for decades, has been hiding all of his sins.  You can read my full review of The Picture of Dorian Gray by clicking here!

Today’s director is the master of Canadian horror, the one and only David Cronenberg! 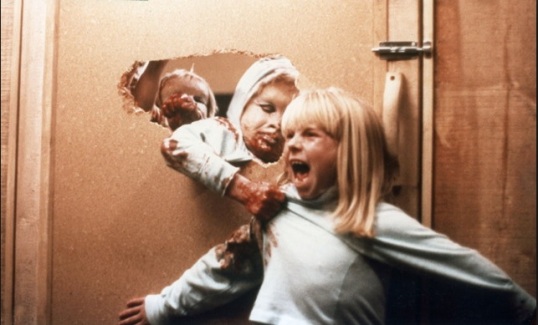 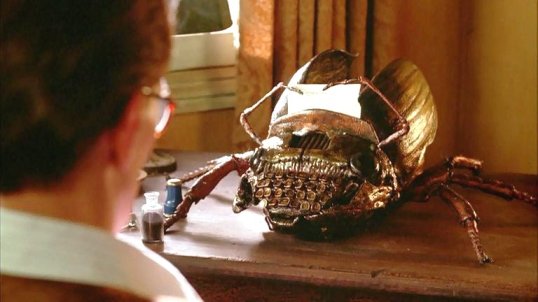