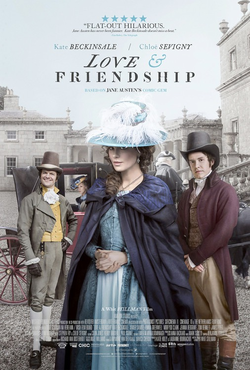 Earlier this week, I named Pride and Prejudice and Zombies as the worst Jane Austen adaptation of 2016.  Of course, I understand that Pride and Prejudice and Zombies isn’t really a Jane Austen adaptation.  Instead, it’s an adaptation of a jokey novel that took Austen’s characters and combined them with zombies.  But you know what?  Nobody would have given a damn if the name of that book and that movie didn’t include three words:  Pride.  And.  Prejudice.  That’s the power of Jane Austen.

Of course, though Austen may have written the novella Lady Susan, it wasn’t published until long after her death and there’s speculation that it was an unfinished (or abandoned) first draft.  In fact, it’s debatable whether or not Lady Susan was something that Austen would have ever wanted to see published.  While it shares themes in common with Austen’s best known work, it also features a lead character who is far different from the stereotypical Austen heroine.  Lady Susan Vernon is vain, selfish, manipulative, and unapologetic about her numerous affairs.  She’s also one of the wittiest of Austen’s characters, a woman who is capable of identifying and seeing through the hypocrisies of 18th century society.

In Love & Friendship, Susan is played by Kate Beckinsale, who does a great job in the role.  One of the best things about Love & Friendship is that it serves to remind us that Kate Beckinsale is a very good actress, even when she isn’t dealing with vampires and Lycans and all that other Underworld stuff.  Lady Susan is a recent widow and has been staying, with her daughter, Frederica (Morfydd Clark), at the estate of Lord and Lady Manwaring (Jenn Murray and Lochlann O’Mearáin) .  That’s a good thing because, as a result of the death of her husband, Lady Susan is now virtually penniless and homeless.  But, once it becomes obvious that Susan is having an affair with Lord Manwaring, she and Frederica are kicked out of the estate.

They eventually find themselves living with Susan’s brother-in-law, Charles (Justin Edwards) and Charles’s wife, Catherine (Emma Greenwell).  Susan, realizing that she needs to find not only a rich husband for Frederica but also one for herself, immediately starts to scheme to win the hand of Catherine’s brother, Reginald DeCourcy (Xavier Samuel).  Meanwhile, Susan also tries to arrange for Frederica to marry the hilariously slow-witted Sir James Martin (Tom Bennett).  Needless to say, things do not go quite as plan and it’s all rather chaotic and hilarious in its wonderfully refined way.

Director Whit Stillman, who has spent his career making refined and witty movies about morality and manners, is the ideal director for Austen’s material and he’s helped by an extremely witty (and, with the exception of Chloe Sevigny, very British) cast.  In the role of Susan, Kate Beckinsale is a force of nature and Tom Bennett is hilariously dense as Sir James, the type of well-meaning dunce who is literally stumped when someone asks him, “How do you do?”  Never before has dullness been so hilariously performed and Bennett’s performance really is a minor miracle.

Love & Friendship was a wonderful excursion into Austenland.  It didn’t even require zombies to be enjoyable.