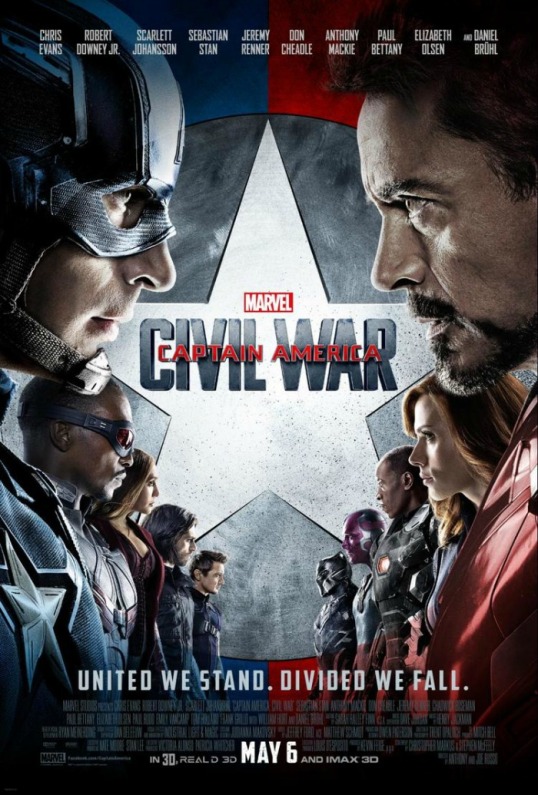 We are just two weeks away from the release of Batman v. Superman: Dawn of Justice and just a week from the premiere of Netflix’s Daredevil Season 2. What better way to remind people that there is another hero vs hero film coming out to start off the summer than with the final full trailer for Captain America: Civil War.

One things which distinguishes this latest and final trailer happens right at the very end. One could almost say that this was the trailer’s post-credit sequence.

Captain America: Civil War swings into action on May 6, 2016. 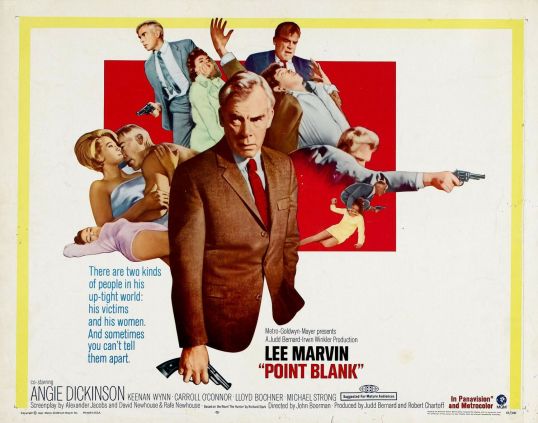 Lee Marvin  was one tough son of a bitch both onscreen and off, awarded the Purple Heart after being wounded by a machine gun blast in WWII.  The ex-Marine stumbled into acting post-war, and Hollywood beckoned in the 1950’s. His imposing presence typecast him as a villain in films like HANGMAN’S KNOT, THE BIG HEAT , and BAD DAY AT BLACK ROCK. A three season stint in TV’s M SQUAD brought Marvin more acclaim, and he solidified that with his Oscar-winning role in CAT BALLOU, parodying his own tough-guy image. Marvin was now a star that could call his own shots, and used that clout in POINT BLANK, throwing out the script and collaborating with a young director he had faith in, John Boorman. 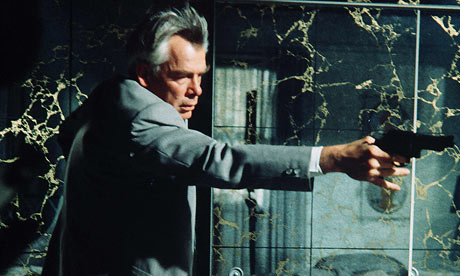 POINT BLANK is a highly stylized revenge drama centering on Marvin’s character of Walker. The nightmarish opening sequence shows how Walker was left for dead on deserted Alcatraz Island by… 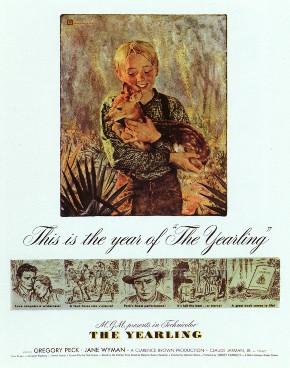 After I finished Abduction: The Jocelyn Shaker Story, I decided to watch a film that was shown on TCM as a part of the 31 Days Of Oscars.  When I started the 1946 film, The Yearling, I thought it was going to be a sweet and heartwarming little movie about a country boy raising a deer.  Instead, it turned out to be a rather dark movie about how much it sucks to grow up in the country.  I can only imagine how many childen, back in 1946, were scarred for life by this movie.

The movie is actually about two yearlings.  The main one is Jody (Claude Jarman, Jr.), who lives in the bayous of 1878 Florida.  His family is a farming and hunting family.  They live in a small shack and struggle to make ends meet.  His father, Penny Baxter (Gregory Peck) is … well, he’s Gregory Peck.  He’s stern but warm and speaks with that deep voice that lets you know that you better pay attention to everything he says.  While Penny is generally laid back and enjoys a good laugh, his wife, Ora (Jane Wyman), is far more serious and severe.  Ora has lost three children and, as a result, she is both overprotective and emotionally distant from Jody.

Jody desperately wants a pet but Ora says that they can’t afford to feed any animals.  However, one day, Penny is bitten by a snake.  Apparently, the organs of a deer can be used to draw out snake venom.  (Seriously, until I watched The Yearling, I had no idea this was the case.  I once nearly stepped on a rattlesnake in New Mexico and it totally freaked me out.  It’s good to know that if I ever do get attacked by a snake, all I have to do is kill a deer.)  Penny shoots a doe and has Jody cut out its heart and liver.  After doing so, Jody notices that the doe had a fawn.  He begs to be allowed to adopt it and, overruling Ora, Penny says that he can.

After getting his deer, Jody goes to visit his best friend, Fodderwing (Donn Gift) and ask him what he thinks a good name would be.  However, Fodderwing’s father informs Jody that his friend has just died.  And really, that scene pretty much epitomizes what The Yearling is about.  Because it’s told almost entirely from Jody’s point of view, the film may occasionally look like an old school Disney film.  But death and hardship are very real in the world of The Yearling.  People die, even children.  Having a pet may make the reality easier to take but it doesn’t change the reality.

Jody names the deer Flag.  As the film progresses, both Jody and Flag grow up.  Unfortunately, as Flag gets older and bigger, he causes more and more trouble for both his family and the neighbors.  He eats crops and he destroys fences.  After Penny is injured, Jody is the one who ends up replanting the corn and fixing all the damage.  But, even after all of Jody’s hard work, Flag still knocks down another fence.  That’s when Jody is told that he must shoot his beloved pet…

Well, it’s a coming-of-age movie and, unfortunately, Jody is living at a time when growing up means giving up childish things.  (That’s always been my least favorite verse in the Bible, by the way.)  The Yearling itself is a pretty good film, though I do have one major problem with it.  The film looks great and both Jane Wyman and Gregory Peck are expertly cast.  If you keep an eye out, you’ll even spot Henry Travers — Clarence the Angel from It’s A Wonderful Life — in a small role.

That said, my main objection to The Yearling — the thing that keeps it from being quite as good as it could be — is the performance of Claude Jarman, Jr.  In the role of Jody, Jarman goes so totally over-the-top with his line readings and his facial expressions that it immediately takes the viewer out of the film’s reality.  Whenever anything happens — whether its Penny getting attack by a snake or his mother throwing a plate at his deer or Flag knocking over a fence — Jarman responds by standing there with his eyes and mouth wide open.  His lines are delivered with a rushed enthusiasm that can’t hide the complete lack of authentic emotion in his performance.  Claude Jarman tries really hard but it’s not surprising to discover that, after The Yearling, he only appeared in a few more films before joining the Navy and then subsequently moving behind the camera as a producer.

Then again, the Academy thought highly enough of Jarman’s performance to give him an honorary Oscar.  The Yearling itself was nominated for best picture but it lost to another sad film about giving up childish things, The Best Years of Our Lives. 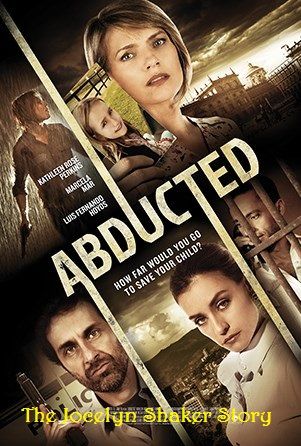 Last night, as a part of my continuing effort to watch 38 movies in 10 days, I watched Abducted: The Jocylen Shaker Story.  Abducted originally aired February 14th on Lifetime.  That’s right — this movie premiered on Valentine’s Day!  I was in San Antonio when it aired, enjoying a romantic night down on the Riverwalk, so I missed the original showing.  Fortunately, the DVR saves all.

And really, Abducted is a strange movie to show on Valentine’s Day.  It’s not a romantic film at all.  Instead, it’s a missing child thriller.  Caitlin Shaker (Kathleen Rose Perkins) is an American who has married a wealthy Colombian businessman, Javier (Kamar de los Reyes).  While Caitlin and Javier are visiting a resort in the rain forest, their daughter, Jocelyn, vanishes.

Suddenly, Caitlyn and Javier find themselves suspected of having done something to Jocelyn.  Though one Colombian detective, Susanna (Eileen Roca Torralva), believes that Caitlin is innocent, she is ignored by her sexist superiors.  The head of the investigation, Captain Rojas (Luis Fernando Hoyos), declares that Javier must be guilty and has him arrested for murder.

Caitlin knows that her husband is innocent but she can’t convince anyone to help her look for her child.  The Colombian authorities want to close the case as quickly as possible.  The American media declares that, even if they are innocent, Caitlin and Javier are still to be blamed for taking Jocelyn to a foreign country in the first place.

The best thing about Abducted is that it gives Kathleen Rose Perkins a starring role.  If you’ve ever seen the Showtime series Episodes, you will immediately recognize Perkins from her role as the wonderfully neurotic and often stoned network executive, Carol Rance.  Episodes is a fairly terrible show but Perkins has always been one of the few bright spots.  In Abducted, she really throws herself into the role of Caitlin, delivering her lines with an emotional intensity that always feels authentic and real.   She is totally sympathetic in the role and elevates the entire film.

As for the film itself, it starts out as your standard Lifetime abduction film but the final 15 minutes, after the real villain has been revealed and Caitlin and Susanna are trying to rescue Jocelyn while rain pours around them, are exciting and well-executed.  It helps that Perkins gives such a great performance that she makes even the most melodramatic and heavy-handed dialogue sound totally and completely credible.  You won’t necessarily be surprised when you discover who the real villains is but you’ll still be happy to see them get their comeuppance.

(Comeuppance … that’s a strange word, no?)

Finally, Abducted was shot on location in Colombia.  Reportedly, the Colombian government has been trying to attract filmmakers, with the hope of changing the country’s international image.  Colombia is a beautiful country and Abducted takes full advantage of all that breathtaking scenery.