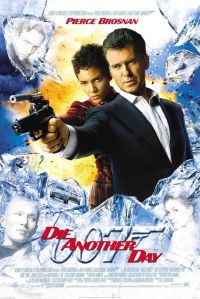 Leading up to the North American release of the latest James Bond feature film, Skyfall, The Shattered Lens is reviewing each and every James Bond film in the history of the franchise. Today’s film is the controversial Die Another Day, the twentieth film in the James Bond franchise, and the final such film to feature Pierce Brosnan in the titular role as 00-agent James Bond. Despite launching to mixed reviews – particularly overseas, where it generated significantly negative reaction in North and South Korea – it was at the time the highest grossing Bond film of all time.

Our cold open for this film has us in North Korea. There, 007 is assuming the identity of a diamond smuggler who is assisting a North Korean Colonel, Tan-Sun Moon, in laundering blood diamonds as part of an ongoing search for advanced military hardware. In order to bypass the landmines of the Korean Demilitarized Zone, the good Colonel has constructed an entire army of hover vehicles which can cross the region without triggering the mines, allowing for a land invasion of South Korea. Bond proceeds with the exchange, but is identified by Zao (Rick Yune), Colonel Moon’s right hand man. Bond triggers an explosion which badly disfigures Zao’s face, which becomes embedded with dozens of diamonds. Colonel Moon attempts to escape on a hovercraft, and Bond pursues him, eventually chasing the Colonel off the edge of a waterfall, apparently killing him. Afterward, Bond is captured by General Moon, the Colonel’s father, and is imprisoned.

After over a year of imprisonment and torture, Bond is traded during a prisoner exchange for Zao. Upon returning to MI6, M (Dame Judi Dench) tells Bond that his 00-status has been suspended. Both she and the Americans believe that Bond cracked under torture and revealed classified information, necessitating the prisoner exchange that brought him back. However, the release of Zao leaves both M and Bond extremely bitter. Determined to recapture Zao, Bond evades MI6’s security and disappears. He travels to Hong Kong, seeking a way back into North Korea, but his contact there informs him that Zao has attempted to disappear in Cuba and provides him with the necessaries to travel there instead.

After he arrives in Havana, Cuba, Bond investigates a clinic there which specializes in gene therapy that is virtually unknown in the first world. Bond’s local contact describes it as prolonging the lives of their leading citizens, and the richest folks in the West, but Bond also learns that the gene therapy would allow a person to totally restructure their appearance and assume a whole new identity. During his investigation, he meets a woman who introduces herself as Jinx (Halle Berry) who, initially unknown to Bond, is an NSA agent on a similar investigation, albeit one with presumably very different goals. Bond locates Zao inside the clinic, and a chase ensues. Although Zao ultimately manages to escape by helicopter (and Jinx in dramatic fashion by diving off the sea wall and boarding a waiting boat which drives her off), Bond recovers a pendant left behind by Zao. Upon unscrewing it, Bond discovers a cache of diamonds. Upon inspection, the diamonds are chemically identical to diamonds found in Sierra Leone, but they bear the identifying mark of a diamond mine owned by a British billionaire and thrill seeker, Gustav Graves (Toby Stephens). Bond is determined to investigate.

This forms the basis of the remaining plot. Our set pieces this time aren’t quite so varied, as much of the remaining story plays out in Iceland, where Graves’ diamond mine is situated, and where he has constructed a special ice hotel for the purpose of a technology convention. Eventually, we return to Korea, for a final showdown that seems somehow empty, despite the increasingly high stakes in terms of both explosions and technology.

The truth, ultimately, is that Die Another Day is a bit of a mess. It has a seemingly incessant procession of action sequences, but they raise the stakes primarily through CGI and improbable wizardry, in a way that threatens our suspend disbelief. I know that this is Bond, and that in 80s-early 00s Bond very much fell into the trap (who didn’t?) of ‘bigger and better’. However, this film takes things a bit too far in my estimation. Its villains aren’t quite as fun as the ones in the past two films (well, Mr. Stamper is kind of a drag I suppose), and don’t really fit the Bond mold. The story is pretty straightforward, but probably doesn’t receive quite the treatment that it deserves to get us established in it. The interactions between Bond and M are a bit too stiff, and I say that even keeping in mind tomorrow’s review piece, Casino Royale. There’s something about Die Another Day that made me think everyone involved was just going through the motions, like a sense of fatigue just hung over the proceedings. It was a bit of a bummer.

As for the women of Bond, Die Another Day actually has a lot to recommend. Breaking convention, this section is heavy with spoilers, but I’m going to risk it just this once. Don’t read on if you’re new to this film and planning to watch it!

Die Another Day continues to feature Dame Judi Dench as a pleasantly strong and uncompromising intelligence chief (I probably haven’t made enough of how much I enjoy her in the role of M in my reviews up to this point). In addition, we’re treated to Halle Berry as Jinx, an ass-kicking NSA agent who seems to do a lot of getting outmaneuvered and captured for being so adept. I didn’t care for Berry’s performance in this film, and I’d be lying if I said she stacked up well against Tomorrow Never Dies’ Michelle Yeoh as a Chinese intelligence agent. Still, compared to some of the other Bond girls, Berry is definitely a warrior. The other major female character, however, is Miranda Frost (Rosamund Pike), a frigid and beautiful MI6 agent… actually, a double agent, who betrayed Bond in the cold open. Pike’s character definitely gives off the edge of competence and deadliness that I, for one, am rooting for in female characters in any Bond movie, and she sells it well. Unfortunately, she’s not nearly as fun as Elektra King, as her motivations are completely unexplored and she just feels like an add-on to the existing plot surrounding some dangerous North Koreans.

Overall, this is probably not one of the better Bond films, though I’d argue that it doesn’t deserve the bad rap that some have given it either. It’s not a terrible film, just overwrought in a kind of Michael Bay way that undermines the characters and concepts. This is a common complaint of all four Pierce Brosnan films, especially, as well as some of the Roger Moore and Timothy Dalton efforts. However, this is the one that I most agree with that assessment of. This film really gets out of control with effects and gadgetry.

That’s it for today’s review. I leave you with the theme from Die Another Day, performed by Madonna. Tomorrow’s review will be of 2006’s Casino Royale.