(Okay, so technically ON HER MAJESTY’S SECRET SERVICE isn’t a Christmas Movie. But neither is DIE HARD, though many consider it to be because it’s set during the holiday season. Well, so is this film, and it’s as close as you’ll get to a James Bond Christmas Movie, so I’m gonna go with that!)

ON HER MAJESTY’S SECRET SERVICE was the first Bond film to not star Sean Connery . Instead, newcomer George Lazenby was given the plum role of 007. Lazenby was a model whose claim to fame was a British TV commercial for a chocolate bar; despite having virtually zero acting experience, producer Albert “Cubby” Broccoli offered him an audition and gave him the part. Critics of the time derided Lazenby’s performance, more due to the fact that he wasn’t Sean Connery than anything else. Looking back on the film, he isn’t bad at all; he handles the…

THUNDERBALL, the fourth 007 adventure, will always hold a special place in my heart. It’s the first James Bond movie I saw at the theater, released at the height of the Secret Agent/Spy craze, and I was totally hooked! I even had all the toys that went with the movie, including Emilio Largo’s two-part boat the Disco Volante, with which I engaged in mighty battles in the bathtub against VOYAGE TO THE BOTTOM OF THE SEA’s Seaview (hey, I was only seven!).

SPECTRE is at it again, this time hijacking a NATO jet loaded with two nuclear bombs, and holding the world hostage. Bond, sent to recuperate at a health spa, stumbles on to trouble related to the crisis, and is sent by MI6 to investigate Domino Derval, sister of the NATO pilot. This leads 007 to Domino’s “guardian” Emilio Largo, a rich and powerful man who’s Number Two…

FLASH! This breaking news story is brought to you by Cracked Rear Viewer, serving the film community since 2015!

It’s the story America (and the world) has been waiting for – the hitherto secret link between The Caped Crusader and Secret Agent 007. Proving once again this blog will go to any lengths to bring you the truth behind the Hollywood scenes! Our trail begins in the year 1943. WWII was raging across both oceans, and America needed heroes to defend the homefront. Columbia Pictures secured the rights to the popular comic book BATMAN, and presented a 15-chapter serial starring one Lewis Wilson (1920-2000) as Bruce Wayne/Batman, battling the evil Japanese saboteur Dr. Daka, played by the villainous J. Carrol Naish:

Wilson was married to the former Dana Natol (1922-2004), and in 1942 they had a son named Michael. Though the Wilson’s film career went nowhere, they…

The Cold War got really hot when James Bond returned to the screen in FROM RUSSIA WITH LOVE, second in the film series starring Sean Connery as Ian Fleming’s Secret Agent 007. Picking up where DR. NO left off, the film is popular with Bond fans for its more realistic depiction of the spy game, though there’s still plenty of action, romance, and quick quips, along with the introduction of several elements soon to be integral to the series.

FROM RUSSIA WITH LOVE has Bond falling for Soviet defector Tatiana Romanova (Daniela Bianchi), who’s willing to help steal a Russian Lektor decoding machine for Her Majesty’s Secret Service. But both she and Bond are just pawns in a larger game, with the international crime cartel SPECTRE making all the moves. Their goal is to not only posses the decoder and ransom it back to the Russians, but to eliminate 007…

Ian Fleming’s secret agent 007, James Bond, was introduced in the 1953 novel Casino Royale, and was a smashing success, leading to a long-running series of books starring MI-6’s “licensed to kill” super spy. No less than President John F. Kennedy was a huge fan of Fleming’s books, and since the early 60’s were all about “Camelot”, producers Albert Broccoli and Harry Saltzman decided to cash in and bring James Bond to the big screen (the character had appeared in the person of Barry Nelson in an adaptation of CASINO ROYALE for a 1954 episode of TV’s CLIMAX!, with Peter Lorre as the villain Le Chiffre).

DR. NO was the first Bond movie, and the producers wanted Patrick McGoohan, star of the British TV series SECRET AGENT, to play the suave, ruthless Bond. McGoohan declined, and Richard Johnson was considered. He also turned them down, leading Broccoli and Saltzman…

Three British agents are murdered, and James Bond is sent overseas to investigate the doings of Dr. Kananga, despot of the Carribean island nation of San Monique in LIVE AND LET DIE. But wait… that’s not Sean Connery as 007, or even George Lazenby. It’s Roger Moore , making the first of his seven appearences as […] 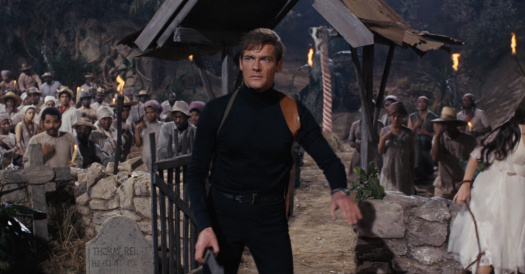 via That Voodoo That You Do: Roger Moore as James Bond 007 in LIVE AND LET DIE (United Artists 1973) — cracked rear viewer

007 fans all over the world cheered when Sean Connery returned to the role that made him famous in DIAMONDS ARE FOREVER, the 6th James Bond screen outing. Connery left the series in 1967 (YOU ONLY LIVE TWICE), and was replaced by George Lazenby for 1969’s ON HER MAJESTY’S SECRET SERVICE. Lazenby was actually pretty good, if a bit boring, but he was one-and-done, choosing not to be typecast as cinema’s most famous spy (how’d that work out, George?). Producers Albert Broccoli and Harry Saltzman offered Connery an unprecedented $1.25 million dollars to come back, which the smart Scotsman snapped up in a heartbeat… who wouldn’t? Well, except for George Lazenby.

The opening sequence has Bond searching the globe to fins Ernst Stavro Blofeld, SPECTRE’s megalomanical leader who ordered the death of Bond’s wife in the previous movie. 007 hunts down his arch nemesis and ends his villainous career in…

I didn’t realize Sir Roger Moore was 89 years old when I first heard he’d passed away on May 23. But as Mick Jagger once sang, time waits for no one, and Moore’s passing is another sad reminder of our own mortality. It seemed like Roger had been around forever though, from his TV stardom as Simon Templar in THE SAINT (1962-69) though his seven appearances as James Bond, Agent 007.

There’s always been a rift  between fans of original film Bond Sean Connery and fans of Moore’s interpretation. The Connery camp maintains Moore’s Bond movies rely too much on comedy, turning the superspy into a parody of himself. Many point to his second, THE MAN WITH THE GOLDEN GUN, as an example, but I disagree. I think the film strikes a good balance between humor and suspense, with Roger on-target as 007, and the great Christopher Lee (who’d guest starred in Moore’s syndicated… 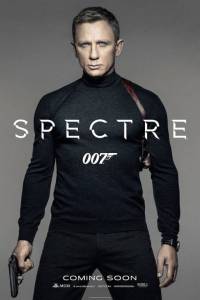 Sometime around 8am in London, the 2nd trailer for Sam Mendes “Spectre” was released. The 24th film in the Bond Franchise, this one is a little similar to the Skyfall trailer in that Bond (Daniel Craig) is perhaps on the run again or is at least trying to cover his tracks. So far, it’s looking good.

Here are some of the things I’ve noticed:

1.) It’s a Snow Movie – With the exception of The World is Not Enough, most of the Bond films that take place in cold climates seem to fair better than the desert ones. As long as none of the girls aren’t named after a Holiday, this might work. Of course, that’s just my opinion there, others may of course disagree.

2.) Bond and M (Ralph Fiennes) already have issues – From the start Bond and M are at odds. That was quick. Nice to get it all out of the way.

3.) The Return of Mr. White. – One of the men responsible for the death of Vesper Lynd and member of Quantum (whatever that was), Mr. White (Jesper Christiansen) makes another appearance here. Maybe he has something important to share?

4.) Use of the theme from On Her Majesty’s Secret Service – that was great to hear. Hope it’s incorporated into the film somehow. I believe that Thomas Newman (Mendes’ long time musical companion) is on board here, so maybe it’ll be used?

5.) Dave Bautista as an evil henchman. Not sure what Mr. Hinx will be doing, but there seems to be a close quarters fight in a train, reminiscent of From Russia With Love.

6.) That sweet, curvy and shiny Aston Martin DB10. Just look at it. In this movie, it goes head to head with a Jaguar CX75. As just about everyone knows, Jaguar is the Official Vehicle of Villains everywhere. Should be interesting to see how that turns out.

7.) Q finally gets a Q Branch worthy of the title. It looks like there a few things he’s working on in the background on some of the shots. One of which appears to be a flamethrower maybe, for the new car.

Enjoy! Spectre is set to release on November 5th (which as a side note of no particular importance nor relation, was the day Marty McFly arrived in Hill Valley, back in 1955). Additionally, here’s a featurette on the cars in the film.


If you’re a long time reader of Through the Shattered Lens, you’re probably aware that we’re all fans of the Bond franchise in some way. Around the release of Skyfall, we collectively reviewed every single Bond film. The project – spearheaded by our own Lisa Marie Bowman – was quite the success with each writer taking a film and showcasing their love (or displeasure for it). To date, I consider that our best  “Avengers” moment.

Today, the Announcement for the next film in the series was made at the legendary Pinewood Studios. Director Sam Mendes introduced audiences to the 24th film, “Spectre”, which already seems interesting given the history of the evil group in Bond canon. I guess this means Quantum is no more, was a small piece of a larger puzzle, or perhaps it’s grown into something bigger? We’ll have to wait and see, but it’s up to speculation. Lee and I were actually talking about that yesterday. We do know that the production will take 007 from London to Mexico City, among other locations.

Although Roger Deakins won’t be on hand for the Cinematography, its okay (though he’ll be missed). Hoyt Van Hoytema is taking over the reigns. Between Spike Jonze “Her”,  “Interstellar” and “Birdman”, Hoytema knows what he’s doing.

Even Aston Martin threw their keys into the ring with the new DB10, to celebrate their 50 year relationship with Bond. 10 copies were made exclusively for the film and we hope Mendes leaves them in better condition than 007 usually does.

Production starts next Monday and the film is on track for release next November.