For my first post-birthday review post, I want to take a look at 6 films that I saw earlier this year but, for whatever reason, I haven’t gotten a chance to review yet.  My goal has been to review every single 2011 release that I’ve seen this year.  So far, I’ve only seen 106 2011 films and I still need to review 21 of them.  So, without further ado, let’s “gang bang this baby out” as a former employer of mine used to say. (*Shudder*  Seriously, what a creepy thing to say…)

What to say about Atlas Shrugged, Part One?  When I recently rewatched it OnDemand with a friend of mine who had just gotten back from Occupying somewhere, he threw a fit as soon as he heard wealthy 1 percenter Graham Beckel declaring, “I am on strike!”  When I first saw it earlier in the year, in a theater full of strangers, they broke out into applause when they heard the same line.  Atlas Shrugged is a wonderfully divisive film.   If you’re a political person, your enjoyment of this film will probably come down to which news network  you watch. If you enjoy those MSNBC spots where Rachel Maddow won’t shut up about the freakin’ Hoover Dam, you’ll probably hate Atlas Shrugged.  If you truly believe that Fox News is “fair and balanced,” chances are you’ll enjoy it.  But what if you’re like me and the only politics you follow are the politics of film and you only bow at the altar of cinema?  Well, I enjoyed Atlas Shrugged because the film really is a grindhouse film at heart.  It’s an uneven, low-budget film that has a few good performances (Beckel and Taylor Schilling), several bad performances, and ultimately, it goes totally against what establishment films have conditioned us to expect when we go to the movies.  Ultimately, the film is a big middle finger extended at both the film and the political establishments and who can’t get behind that?  Add to that, Roger Ebert hated it and when was the last time he was right about anything?

I’ve read a lot of rapturous reviews of this film online and my aunt Kate loved it when she saw it at the Dallas Angelika earlier this year.  So, admittedly, when I watched this film via OnDemand, I had pretty high hopes and expectations but, unfortunately, none of those expectations came anywhere close to being met.  In the film, two of my favorite performers — Michael Sheen and Maria Bello — play the middle-class parents who have to deal with the consequences (both emotional and physical) of a terrible crime perpetrated by their son.  The film is based on the Virginia Tech massacre and both Sheen and Bello give excellent performances but overall, the film feels like a thoroughly shallow exploration of some various serious issues.  Ultimately, the film’s refusal to provide an explanation for the crime feels less like a brave, artistic choice and more like a cop-out.  The film is less abstract than Gus Van Sant’s Elephant and Denis Villeneuve’s Polytechnique but it’s also a lot less effective. 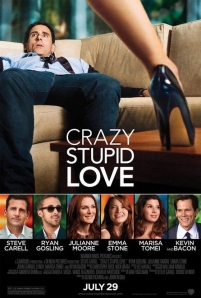 I don’t know if I’ll ever forgive Steve Carell for abandoning The Office and forcing upon me the current, almost painful season of the show.  Still, I can’t totally blame him because the guy is totally a film star and he proves it in Crazy, Stupid Love by holding his own with other certifiable film stars like Ryan Gosling, Kevin Bacon, Marisa Tomei, Julianne Moore, and Emma Stone.  In the film, Julianne Moore plays Carell’s wife who leaves him for a coworker (played by Kevin Bacon, doing his charming jerk routine).  The depressed Carell is taken under the wing of womanizer Gosling who teaches Carell how to be more confident and appealing.  Things seem to be working out well until Gosling starts going out with Carell’s daughter (played by Emma Stone).  The movie, itself, isn’t anything special and it’s really kind of a mess but it’s saved by a massively appealing cast.  And, by the way, Ryan Gosling —très beau!  Seriously.

Taking place in pre-Desert Storm Iraq, The Devil’s Double claims to tell the true story of Latif Yahia, an Iraqi who was forced to serve as the double for the sociopathic young dictator-in-training Uday Hussien.  I’ve read that there’s some debate as to how faithful The Devil’s Double is to the facts of the story and it is true that Latif is portrayed as being almost too good to be true but no matter.  The Devil’s Double is a compelling and oddly fascinating little gangster film, one that manages to show the dangerous appeal of the excessive lifestyle of a man like Uday Hussien without ever actually being seduced by it.   The film is dominated by Dominic Cooper, who gives a great performance playing both the tortured Latif and the cheerfully insane Uday. 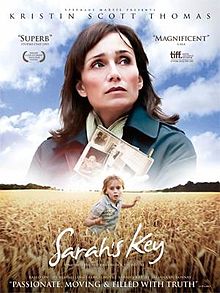 Sarah’s Key tells two stories at once and, the result, is a film that feels very schizophrenic in quality.  The better part of the film deals with Sarah, a 10 year-old Jewish girl living in Nazi-occupied France.  When Sarah and her parents are sent to a concentration camp, her younger brother is left behind in Paris.  Sarah eventually manages to escape and desperately tries to get back to Paris to rescue her brother.  Meanwhile, in the modern-day, a journalist (Kristen Scott Thomas) researches Sarah’s story and discovers that her French husband’s family has a connection of their own with Sarah’s story.  The film is compelling and heart-breaking as long as it concentrates on Sarah but, unfortunately, the modern-day scenes feel forced and predictable and the end result is a film that’s never quite as good as it obviously could have been.

Look, I make no apologies — I freaking loved this movie.  Yes, plotwise, this film feels almost like a parody and yes, so much of this film was over-the-top and kinda silly but I don’t care.  I loved this film for the old-fashioned, melodramatic, and rather campy spectacle that it is.  Robert Pattinson plays a Depression-era Ivy League college student-turned-hobo who ends up joining the circus and falling in love with Reese Whitherspoon, the wife of insane circus owner, Christoph Waltz.  Pattinson isn’t much of an actor but he’s easy on the eyes and he and Whitherspoon have just enough chemistry to remain watchable.  The film, however, is totally dominated by Waltz who is both charming and scary.  The next time your man makes you sit through anything starring Jason Statham, you make him watch Water for Elephants.