It’s been too long since I did a What Lisa Marie Watched Last Night post so allow me to correct that by telling you about what I watched last night.  Last night, I turned on the Lifetime Movie Network and I watched a future classic — Doug Campbell’s Betrayed at 17.

Why was I watching It?

I was watching it for two reasons.  First off, I’m an unapologetic admirer of director Doug Campbell’s previous film, Accused at 17.  I’m hoping that Campbell will go the trilogy route and give us a Convicted at 17 at some point in the near future.  Secondly, this film was on the Lifetime Movie Network and I love LMN.

Okay, there was a lot of plot to deal with here.  The film starts out with scummy high school football player Greg (Andy Fischer-Price) seducing insecure virgin Lexi (Amanda Bauer) and secret recording the encounter on his laptop because, apparently, that’s the type of terrible things that 17 year-old boys do.  Anyway, Greg’s got an ex-girlfriend named Carleigh (Katie Gill) and we know that Carleigh has some issues because she’s blonde, rich, drives a convertible, and says stuff to Lexi like: “I nearly ran your fat ass over.”  Well, Carleigh finds out about the sex tape and gets so upset that she uploads the video to YouTube and soon, the whole school is watching it and Lexi gets so upset that she runs out into the middle of the street and gets run over by a truck.

So far, we’ve got the makings of a typical anti-bullying polemic and the film seems to be going down that route as Lexi’s mom (Alexandra Paul) demands justice for her daughter.  However, then the film takes a sudden turn and just goes freaking crazy!  See, Greg is feeling guilty about his part in Lexi’s death so Carleigh shows up with a gun and kills him!  Then she steals Greg’s wallet and uses it to frame Lexi’s drug addict older brother (Shane Ross).  So, Lexi’s mom and Greg’s mom (Paula Trickey) team up to try to take Carleigh down.

By the way, did I mention that Carleigh’s Dad is apparently in the Mafia?  Well, I’m not sure if he actually is but he certainly acts like he is…

Seriously, this is a deceptively simple movie that’s really quite odd and compulsively watchable in the best Lifetime tradition.

In many ways, this film epitomized everything that I love about a good Lifetime film.  It took a serious issue (bullying, in this case) and then explored it in the most melodramatic, over-the-top, tawdry, and silly way possible.

Just the title itself — Betrayed at 17 — is genius.  Seriously, when you’re 17, everything is such a drama!  Or at least it was for me.  And I can remember that everything — and I do mean everything — was framed through the lenses of nonstop, over-the-top melodrama.  Whether it was some other girl talking to “my man” or my best friend failing to answer her phone or any of the countless arguments that I had with my mom over things that seem so amazingly unimportant now, it was always all about being and feeling betrayed.

Finally, while this film is full of histrionic dialogue, there’s one scene that manages to perfectly capture the excruciating awkwardness of being in love when you’re in your teens.   Greg, while admiring Lexi’s legs, asks her about a scar.  “I cut myself shaving,” Lexi replies.  Now, believe it or not, I had almost the exact same conversation when I was 17 and this film got it right.

Well, originally this looked like it was going to be yet another mawkish, if well-intentioned anti-bullying polemic but once people started drawing guns on each other and desperately trying to take out security cameras, it all worked.  This was two hours of pure, silly Lifetime goodness.

Oh my God, a few!  Listen, what 17 year-old girl didn’t get filmed having sex with a jock or accidentally end up shooting her ex-boyfriend?  Seriously, that’s just a part of growing up.

1) Guns are dangerous.  So are videos of your ex having sex with some other girl.  Put them together and inevitably, someone’s going to end up dead.

2) Fortunately, it’s apparently very easy and simple to frame someone for murder.  So, if you haven’t done it yet, hurry up before things get complicated. 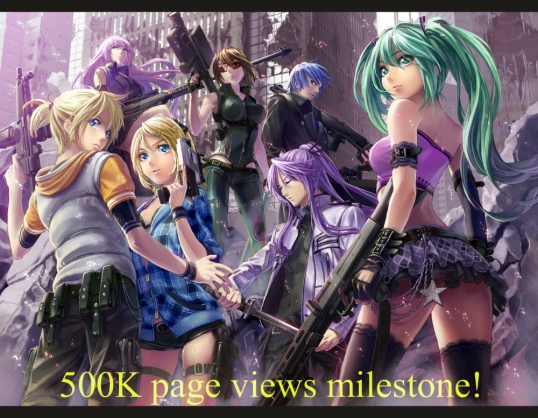 While we don’t get the tens to hundreds of thousands of page views per day the more established and much bigger blogs get on a day-to-day basis I’m still proud to say that our motley band of writers have been able to attract at least a thousand or more views a day. With that in mind we’ve finally reach 500K in page views since the site’s inception a little under 2 years ago and I think we’re on our way to making it a million in less time.

Once again, I must thank my co-founder of the site in @LisaMarieBowman for keeping things fresh and fun for people to visit. Other writers like necmoonyeti, pantsukudasai56 and Semtex Skittle (@Cindaer) have done their best to add their unique voices to the site whether it be reviews and/or thoughts on music (mainly metal), anime and manga to gaming titles. Writer Leonard Wilson (@Cavatica) has become another of the unique voices this year and has established his own brand of reviews of films to the many on this site. The rest of the gang like Senor Geekus (@SenorGeekus), danceonavolcano (@nyneshaydee), zackthewicked1, leonth3duke (@DukeD1989) and Dazzling Erin (@TakeSumE) are not as prolific as the other but their contributions still is what makes this site run.

Here’s to another year to look forward to and better things to come for the crew of Through the Shattered Lens.

Note: yes, every milestone will be celebrated with a choice anime/manga based artwork. >_<