4 Shots From 4 Films is just what it says it is, 4 shots from 4 of our favorite films. As opposed to the reviews and recaps that we usually post, 4 Shots From 4 Films lets the visuals do the talking. Character actress Sylvia Miles passed away today at age 94. Though never a household name, movie lovers knew they were in for a treat whenever Sylvia appeared onscreen, as did her peers, nominating her twice for the Best Supporting Actress Oscar. In her honor, we present 4 shots from the films of Sylvia Miles. 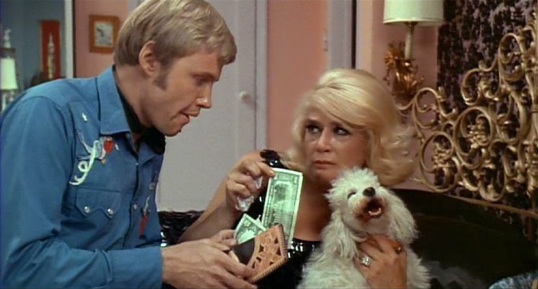 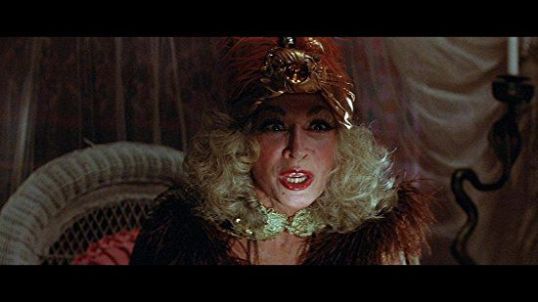 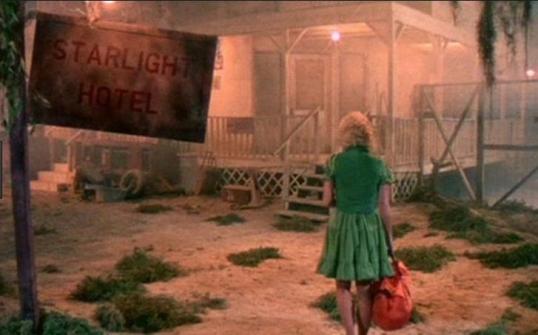 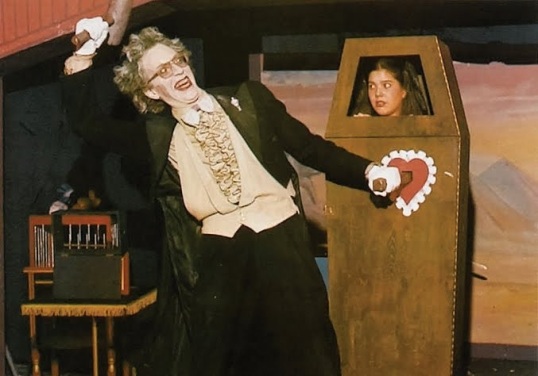 1980’s The Funhouse opens with an almost shot-for-shot recreation of the famous shower scene from Psycho, with Amy (Elizabeth Berridge) getting attacked in the shower by a masked, knife-wielding maniac.

The only difference is that there’s no shrieking violins, there’s no blood, and the knife is quickly revealed to be a fake.  It turns out that the “killer” is actually Amy’s younger brother, Joey (Shawn Carson).  Joey loves horror movies.  In fact, he’s pretty much the perfect stand-in for The Funhouse‘s intended audience.  Joey was just playing a rather mean-spirited prank but now, as a result, Amy snaps that she’s not going to take him to the carnival.

Of course, Amy isn’t supposed to be going to the carnival either.  Her parents have strictly forbidden it.  Everyone knows that traveling carnivals are dangerous and, at the last town the carnival visited, two teenagers disappeared!  There’s no proof that the carnival has anything to do with those disappearances, of course.  But still…

Amy does exactly what I would have done in her situation.  She tells her parents that she’s going over to a friend’s house and then she goes to the carnival anyway!  Accompanying her is her boyfriend Buzz (Cooper Huckabee), who is so cool that he has a name like Buzz.  Also along for the ride: Amy’s best friend, Liz (Largo Woodruff), and her boyfriend, Richie (Miles Chapin).  Richie’s kind of a loser but that’s to be expected.  Every group needs at least one idiot who can do something stupid that gets everyone else killed.  We all know how that works.

The carnival turns out to be just as sleazy as Amy’s parents thought it would be.  There’s a fake psychic (Sylvia Miles).  There’s a magician who dresses like Dracula.  There’s a barker (Kevin Conway), whose deep voice is constantly heard in the background.  And, of course, there’s a funhouse!  Still, everyone’s having a good time.  Either that or they’re all just stoned.

For his part, Joey sneaks out of the house and goes to the carnival himself.  He doesn’t have quite as much fun as Amy.  In fact, his experience is pretty scary.  Weird carnival people keep yelling at him.  He keeps getting lost.  Still, things could be worse.  By the time his parents arrive to pick Joey up, Amy and her friends are all trapped in the funhouse.  They’re being pursued by the barker and his deformed son (Wayne Doba).  Needless to say, it’s all pretty much Richie’s fault.

Richie.  What a dumbass.

With its teenage victims and its lengthy chase scenes, The Funhouse is often dismissed as just being another early 80s slasher film.  However, The Funhouse is actually a fairly clever, entertaining, and occasionally even witty horror film.  Much like director Tobe Hooper’s best-known film, The Texas Chainsaw Massacre, The Funhouse gets its scares by convincing audiences that they’re actually seeing more than they are.  Hooper emphasizes atmosphere and performances over gore.  While The Funhouse has its share of jump scares, it mostly succeeds by convincing us that anyone could die at any moment.  It’s an intense film, with excellent performances from both Elizabeth Berridge and Kevin Conway.

After kickstaring the slasher genre with The Texas Chainsaw Massacre, Hooper used The Funhouse to poke a little fun at it.  From the opening shower scene to the electrifying finale, Hooper plays with the genre-savvy expectations of the audiences.  Our four victims even do the smart thing for once — they try to all stay together.  Needless to say, that doesn’t work out too well.

The Funhouse is an entertaining thrill ride and, seen today, it’s more evidence that Tobe Hooper deserved better than he got from the film industry.

Welcome to Part One of the Halloween Edition of Lisa Marie’s Favorite Grindhouse and Exploitation Trailers!  Watch for Part 2 tomorrow and Part 3 on Monday.

I love this trailer for the title alone.  Anything called I, Madman is automatically going to be great.

This is one of those trailers that I just happened to wander across on YouTube and the main reason it’s here is because I just like the kitschy, pop art feel to it.  How scary can anyone named Harlequin really be?

“In Horrorvision!”  Judging from this trailer, Horrorvision apparently is another way of saying, “Shot on video tape.”  I actually own this film on DVD.  I bought it solely because it was a Code Red DVD and I needed to complete my collection.  I managed to watch about 10 minutes of it before the extreme tackiness of the whole thing overwhelmed me and I just had to turn it off and watch some Degrassi instead.  Still the trailer has a certain deam-like quality to it.

This trailer gets to me because mannequins get to me.  Seriously, they creep me out and once when I was like nine, I saw one move by itself in the mall.  True story!  Plus, the last time I went to Victoria’s Secret, there were headless, lingerie-clad mannequins in the display window.  Seriously!  Where were the heads?  It was so creepy and serial killer-like.  Don’t even get me started on Dexter this season.  Seriously, mannequins suck.

Honestly, I would never stay at a place called Motel Hell.  Especially if there’s a Comfort Inn nearby.

This trailer actually really scared me the first time I saw it.  Once again, mannequins suck.  (You can spot a few in this one.)