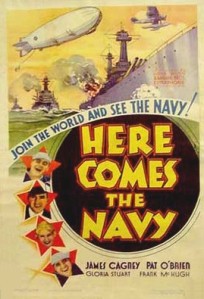 Lisa asked me to review an old best picture nominee for today’s movie a day so I picked Here Comes The Navy, because hardly anyone has ever heard of it and I usually like old service comedies.

Chesty O’Connor (James Cagney) is a construction worker who thinks that he is tougher than anyone in the Navy.  When Chesty gets into a fight with Chief Petty Officer Biff Martin (Pat O’Brien), Chesty enlists in the Navy just to get on his nerves.  Chesty brings his friend Droopy (Frank McHugh) with him.  With Biff determined to force him out of the service, Chesty bristles against the rules of the Navy.  But then Chesty meets and falls in love with Dorothy (Gloria Stuart), Biff’s sister.  Chesty loses his bad attitude, proves that his shipmates can depend on him, saves Biff’s life when an airship landing goes wrong, and even gets to marry Biff’s sister.

Here Comes The Navy is a typical 1930s service comedy, distinguished mostly by the wiseguy presence of James Cagney.  It is the type of movie where men have names like Chesty, Biff, and Droopy.  Warner Bros. made a hundred versions of this story and Here Comes The Navy was certainly one of them.

Here Comes The Navy was produced with the full cooperation of the U.S. Navy, so it’s not surprising that it feels like a recruiting film.  The sailors are all happy to do their bit to protect the American way of life and the commanding officers are all tough but fair.  The majority of the movie was filmed on the USS Arizona, which would be sunk seven years later during the Japanese attack on Pearl Harbor.  Here Comes The Navy also features some scenes shot on the USS Macon, an airship that would crash a year later.

It’s hard to guess how Here Comes The Navy came to be nominated for best picture.  It’s okay but, for the most part, it’s for James Cagney completists only.