This October, we’re using 4 Shots From 4 Films to look at some of the best years that horror has to offer! 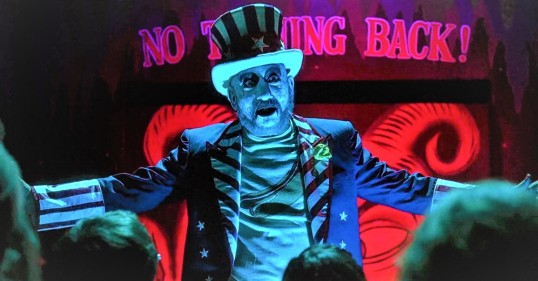 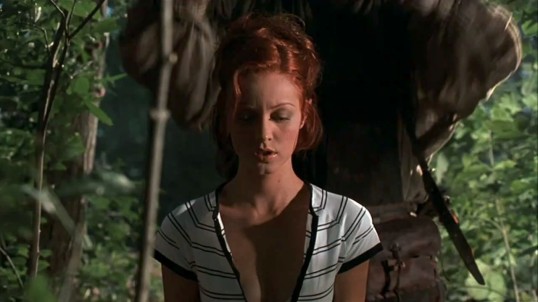 (Lisa is once again trying to clean out her DVR!  She’s got about 182 films on her DVR and she needs to get them all watched by the end of this year!  Will she make it?  Not if she’s too busy writing cutesy introductions for her reviews to actually watch the movies!  She recorded Crime + Punishment in Suburbia off of Flix on February 25th!)

I have seen some really pretentious movies before but Crime + Punishment in Suburbia is really something else.  As you might be able to guess from the title, the film is supposedly based on the Dosteyevsky novel but it takes place not only in modern times but in suburbia as well.  Oh, and it actually has next to nothing in common with Doteyevsky novel, beyond a murder and occasional religious symbolism.  And by occasional, I mean that there’s a scene where Vincent Kartheiser wears a Jesus t-shirt.

Kartheiser plays Vincent, a teenager who I think we’re supposed to think is dark and disturbed but instead he just comes across like a weird little poser.  I mean, honestly, it takes more than just wearing black clothes to be weird.  I had a closet full of black clothes when I was eighteen and it still never brought me any closer to enlightenment.  Anyway, Vincent is a classmate of Roseanne (Monica Keena) and Roseanne is dating a handsome but dumb jock named Jimmy (James DeBello).  Roseanne’s mother is named Maggie (Ellen Barkin) and Maggie has recently married an abusive drunk named Fred (Michael Ironside).

Fred is a total jerk so Maggie goes out with her best friend, Bella (Conchata Ferrell), to a bar.  It’s at the bar that she meets Chris (Jeffrey Wright), a handsome and charming bartender.  Soon, Chris and Maggie are having an affair and when Fred finds out, he rapes his stepdaughter.  Roseanne convinces Jimmy to help her murder Fred but, after the deed is done, Roseanne finds herself struggling with her conscience.

Now, of course, in Crime & Punishment, the whole point is that the murder itself was largely random and motiveless.  The rest of the book deals with the protagonist’s attempt to come to terms with not only his crime but also with the meaninglessness of it all.  In Crime + Punishment in Suburbia, Roseanne has a good reason for killing Fred.  Fred is such a monster that there’s no real confusion as to why Roseanne did what she did.  One could argue, quite convincingly, that if she didn’t kill Fred, he would have ended up killing her.  That makes the film’s later attempt at moral ambiguity feel rather hollow and empty.

The other problem with Crime + Punishment in Suburbia is that we don’t see the story through Roseanne’s eyes.  Instead, the entire movie is narrated by Vincent.  Now, Vincent Kartheiser is not a bad actor.  Anyone who has seen Mad Men knows that.  And, in this film, he occasionally gets to flash a cute smile that makes the character a little bit bearable.  But the character he plays, Vincent, is so weird and off-putting that you have no desire to spend 100 minutes listening to him portentously talk about his existence.  Considering that Monica Keena actually gives a pretty good performance as Roseanne, the decision to tell her story through Vincent’s eyes feels all the more mistaken.

Crime + Punishment in Suburbia is one to avoid.

Last night, I watched the “Lifetime world premiere” of the 2008 horror film, The Alphabet Killer.

Because I was, okay?  Don’t judge me!

Actually, I was watching for 2 reasons:

1) Being the kinda morbid girly girl that I am, my love of a good Lifetime movie is almost equalled by my love for reading about unsolved murders.  A little while ago, I was going through my copy of Michael Newton’s Encyclopedia of Unsolved Crimes and I happened to come across the Alphabet Murders.  In the early 70s, three young girls were murdered in New York.  Each of the girls’ first and last names started with the same letter and each body was found in a town that started with the same letter as the girls’ name.  Now, this kinda freaked me out because, if I ever decided to use my mom’s maiden name, then my name would be (Lisa) Marie Marchi.  That, of course, would make me a potential victim — especially when you consider that the town of McKinney, Texas is within driving distance.   I mean, seriously.  File that under things that make you go “Agck!”

2) When I first saw the commercials for the Alphabet Killer (which was advertised as being a “Lifetime world premiere!” even though the film wasn’t originally made for the Lifetime network), I immediately assumed that it had to be one of those terrible Ulli Lommel true crime films.  And I was all like, “Really?  Ulli Lommel is now a member of the Lifetime family?  This, I have to see!”  Well, turns out that he’s not and, quite frankly, thank goodness for that.  This Alphabet Killer was directed by the director of Wrong Turn, Rob Schmidt.

The idea of a schizophrenic detective trying to catch a serial killer is a pretty clever one and director Rob Schmidt did a fairly good job making the audience wonder how much of what we’re watching is a real and how much is just the product of the detective’s psychosis.  Eliza Dushku, who kicks ass in general because she was Faith the Vampire Slayer, gives an excellent performance.  I had a hard time, at first, believing she was a cop but I did believe her as a schizophrenic and yes, that is meant as a compliment.

As well, the entire cast did a pretty good job, particularly Cary Elwes and Timothy Hutton.  Both of them brought some interesting layers of complexity to thinly written characters.

The scenes where the dead would literally confront Eliza Dushku were well done, even though I’ve seen the same scene in countless other horror films.

While I was watching the Alphabet Killer, I had the house to myself because my sister Erin had gone into Arlington for the Rangers game.  When I was about halfway through the film (I was watching it off of my DVR), Dallas got hit with the storm of the century.  Seriously.  It started raining around one in the morning and at 1:10, the power went off.  The TV (and the movie) flicked off with a sharp THRACK and the entire house was plunged into darkness.  My bedroom was suddenly pitch black and I found myself feeling very vulnerable lying in bed in only my beloved Pirates t-shirt and panties.  All I could hear was the sound of rain and hail pounding against the house while somewhere in the distance, sirens wailed.  After the first flash of lightning briefly illuminated my shadowy bedroom, I started to count.  I had barely started to form the word, “Two…” when a deafening explosion of thunder caused not only the house to shake but me to have to catch my breath.  Suddenly, I heard a wailing meow and another flash of lightning briefly revealed my cat Doc sitting in my doorway.  Stumbling through the darkness, I managed to get Doc and carry him back to my bed with me.  I sat there with him, fully knowing that even though I was trying to protect him, he probably thought he was protecting me.  (Or, more likely seeing as how he’s a cat, claiming me as his territory.) Suddenly, a terrible thought entered my mind: “Did I remember to lock the front door?  Or the back door?”  Was I hearing the wind and rain pounding against my house or was I hearing the Alphabet Killer stumbling around downstairs?  Finally, after half an hour of this, the lights finally came back on and I could breathe again.  I slowly made my way downstairs (Doc, of course, stayed up in my room and went to sleep) and discovered that I had indeed locked all the doors before the storm.  So yay me!

Now that I was fully freaked out, I went ahead and watched the rest of the Alphabet Killer.  I’m not sure if it was the movie that kept my uneasy or if it was the storm.  All I know is that it worked.  (The rain, by the way, mysteriously ended as soon as the movie did.)

This is another one of those films where the idea behind it is actually more clever than the way that the idea is actually executed.  Once you get passed the idea that Dushku is schizophrenic, you realize that the film itself is actually pretty predictable.  If you can identify the killer from the minute he first appears on screen, then you might not be that smart.  Just saying.

Needless to say, The Alphabet Killer has next to nothing to do with the actual case.  Normally, this wouldn’t be a big deal because that’s the grindhouse way, right?  But in this case, the truth is so interesting that it’s a shame that it was pretty much just shoved over to the side.  If there isn’t one already, somebody needs to do one of those hour-long, basic cable documentaries about the Alphabet murders.  And Bill Kurtis needs to host it.

Honestly, if I was tracking a serial killer, I’d probably do it in much the same way as Eliza Dushku does in this film.  By that, I mean I’d probably be way too obsessive for my own good and I’d eventually end up strapped to a table somewhere.  Seriously, I just don’t think I’m meant to hunt serial killers.

It’s good to be a Bowman and sometimes, storms can actually be scary.