Megaforce is the code name for America’s daring, highly-trained, Special Mission force. Its purpose: To defend human freedom against Cobra, a ruthless terrorist organization determined to rule the world.

Megaforce is another daring, highly-trained, Special Mission force.  Led by Ace Hunter (Barry Bostwick), Megaforce is a group of international soldiers who have the latest technology at their disposal, like dune buggies and lasers and all of the cars the were left over from Cannonball Run.  They also have flying motorcycles that can shoot missiles and we can all agree that’s pretty damn cool.  When Megaforce is recruited to protect the Republic of Sardun from being conquered by the nation of Gamibia, it brings Ace and his men into conflict with Duke Gurerra (Henry Silva), who used to be a friend of Ace’s until he became a mercenary who would work for the highest bidder.  Duke’s latest employer?  GAMIBIA!

Megaforce is a strange movie.  Director Hal Needham later said that, when the film went into production, he felt he had his finger on the pulse of the country and apparently he thought America was ready for a movie about a group of men who wear skin-tight uniforms and who communicate almost exclusively by giving each other a thumbs up.  What led to Needham choosing to cast Barry Bostwick in the lead role?  Bostwick is very enthusiastic as Ace but he’s not a believable military leader.  We expect discipline and stoicism from our military leaders but Bostwick always seems to be a little too excited about everything.  “Remember,” he says, “the good guys always win!  Even in the 80s!”  Then he kisses his thumb, which is his way of letting the newest member of Megaforce, Zara (Persis Khambatta), know that she is loved.  I don’t know of many military leaders who were known for kissing their thumbs.  Patton probably could have gotten away with it.  Eisenhower, however, never would have been elected President if he had been half as enthusiastic as Ace Hunter.

There’s not really any plot to Megaforce.  Zara tries out for the group but she’s a woman so she has to prove herself.  Ace and his second-in-command, Dallas (Michael Beck), lead the troops in Gamimbia.  The soldiers shoot lasers and rockets from their glowing cars and their flying motorcycles but Megaforce is one of those strange action movies where no one is actually injured as a result of all the violence.  Megaforce was made for the kids.  It was made for an audience that cares more about flying motorcycles than plot or good acting or the non-existent romantic sparks between Barry Bostwick and Persis Khambatta.  In 1982, there probably wasn’t a parent alive who didn’t dread the prospect of their child demanding to watch Megaforce for the hundredth time.

Megaforce has a reputation for being one of the worst movies ever made but it’s not that bad.  How many other films feature something like this:

It’s impossible not to appreciate the brave efforts of the actors as they feign excitement over something that was definitely not actually happening in front of them.  Michael Beck and Barry Bostwick will make you believe that a green screen can be used to make a motorcycle look like it can fly.  Megaforce’s slogan may be Deed Not Words but who needs either when you’ve got a hundred dollars to spend on your special effect budget?

I will be the first to admit that Megaforce is no Delta Force but it’s dumb and sometimes it features Barry Bostwick on a flying motorcycle and it’s got Henry Silva in it, laughing like a maniac.  And finally, it leaves us all with a valuable lesson.  The good guys always win!  Even in the … 20s. 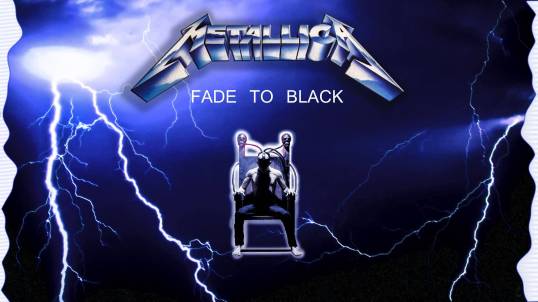 Love them or hate them there’s really no middle-ground when it comes to one of the Big Four of thrash metal. You either love the band even through their dabbling into hard rock and the Bob Rock-era or you hate them for  the perceived selling out and the Bob Rock-era. You ask any Metallica fan and they would pretty much agree that their third album, Master of Puppets,  was the band at it’s peak. There would be some debate on whether the Black Album was where the band began to alienate some of it’s earliest fans, but that’s not what we’re here for.

We are here for the latest “Song of the Day” and it’s from their second full-length album, Ride the Lightning. The song is the band’s very first power ballad and follows the album’s theme and exploration of death. Where the album’s title took on the concept of death by electric chair the song chosen this time around is about the band’s exploration of the concept of suicide.

Yes, this was the song that the band had gotten into hot water for it’s suicidal lyrics which purportedly led to teens offing themselves after listening to it constantly. What critics of the song failed to realize was just how much teens at the time the song came out saw the song as therapeutic. They related to the song and used it as an outlet for their own alienation and depression.

Just like it’s subject matter it begins with a melancholy melody that gives a glimpse into the singer’s mindset. It’s not the typical fast playing many have associated with thrash, but that arrives soon enough as the song finishes off it’s vocals with a fade out that leads into Kirk Hammett’s 2-minute guitar solo that ultimately fades out as well…

The song that critics of metal gets wrong then and continues to even now is the classic “Fade to Black”.

Life it seems, will fade away
Drifting further every day
Getting lost within myself
Nothing matters no one else
I have lost the will to live
Simply nothing more to give
There is nothing more for me
Need the end to set me free

Things not what they used to be
Missing one inside of me
Deathly lost, this Can’t be real
Cannot stand this hell I feel
Emptiness is filling me
To the point of agony
Growing darkness taking dawn
I was me, but now he’s gone

No one but me can save myself, but it’s too late
Now, I can’t think, think why I should even try
Yesterday seems as though it never existed
Death Greets me warm, now I will just say goodbye

Hi there and welcome to another edition of Lisa Marie’s Favorite Grindhouse and Exploitation trailers!  Today, we bring you 6 trailers specifically made to appeal to audiences made up of hard men and the women who have to put up with them.

Let’s start things off with this trailer from the Philippines.  I never thought I’d see a trailer as violent as the trailer for Massacre Mafia Style but then I came across this one for Phantom Soldiers.  “You’re a hard man…but the answer is no.”

This appears to be the family friendly version of Phantom Soldiers.  I always love how these trailers for obviously terrible movies always claim to be bringing “the greatest spectacle ever” to audiences.  Myself, I want to find and slap whoever thought it was a good idea for the bearded guy to wear a powder blue headband while talking about how the good guys always win “…even in the 80s!”

I guess if families weren’t watching the bearded man in the skin-tight outfit and the blindingly blue headband, they were witnessing the “chase thriller for the 80s…JUNKMAN!”

I’ve never seen this film nor had I ever heard of it until I came across this trailer on YouTube.  But I think that our readers who happen to be creature movie fans will enjoy this one.

All this exposure to grindhouse and exploitation films must be getting to me because I kept expecting someone to go, “That’s not my arm, baby,” as I watched this trailer.  Agck!

After all that, it’s time for some girl power, don’t you think? From director Herschell Gordon Lewis, who also directed the Gruesome Twosome.  “This picture is not for children…”