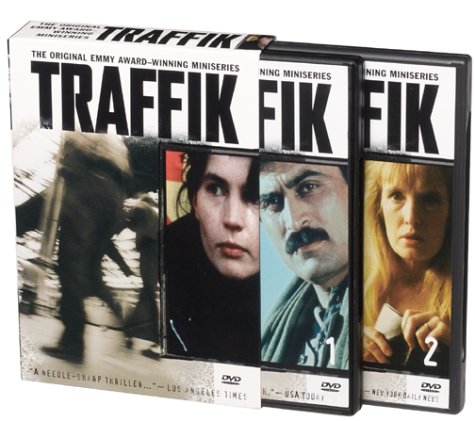 First aired in 1989 and running a total of six episodes, Traffik is a British miniseries that takes a look at the War on Drugs.

British minister Jack Lithgow (Bill Paterson) has negotiated a treaty with Pakistan.  The UK will send increased aide to Pakistan if the government will crack down on the heroin trade.  In theory, it sounds like a good idea.  Pakistan will get extra cash while joining the effort to stop the flow of heroin into Europe.  In reality, it harms the poor farmers in Pakistan.  After soldiers destroy his village’s poppy fields, Fazal (Jamal Shah) is left with no way to support his family.  He travels to the city, where he gets a job with drug lord Tariq Butt (Talat Hussain).  It’s a job that Fazal has to take in order to feed his family but it’s also a job that puts his family’s safety at risk.

After the heroin in processed in Pakistan, it is smuggled into Europe by men like Karl Rosshalde (Juraj Kukura), a German businessman whose company is a front for his operations.  When two German police detectives (Fritz Müller-Scherz and Tilo Prückner) arrest Jacques (Peter Lakenmacher), one of Karl’s couriers, it looks like Karl might finally being going to prison.  However, Karl’s British wife, Helen (Lindsay Duncan), proves herself to be just a ruthless as he was when it comes to running his operations.

Even with Karl on trial, the drug trade continues.  The heroin that is processed in Pakistan and smuggled through Germany eventually ends up in the UK, where it is used to by Caroline (a very young Julia Ormond), the teenage daughter of Jack Lithgow.  When Caroline runs away from home, Jack searches the streets and back alleys of London and, for the first time, he starts to understand the futility of Europe’s war on drugs.

If Traffik sounds familiar, that’s because it served as the basis for Steven Soderbergh’s 2000 film, Traffic.  When I watched Traffik this week, I was actually surprised to see how closely Soderbergh’s film stuck to the plot of the miniseries.  The only difference, beyond shifting the action from Europe to North America, is that Soderbergh replaced the farmer’s storyline with a story involving Benicio del Toro as a Mexican policeman.  That’s a bit of shame, actually.  Traffic is one of my favorite Soderbergh films but it is a bit cop-heavy.  The people who actually do the day-to-day work in the drug trade, as opposed to the drug lords, aren’t really represented in Soderbergh’s film.  As the British miniseries shows, people like Fazal end up working in the drug trade not because they’re evil but because they literally have no other choice.  It’s either work for someone like Tariq or starve to death.

As I mentioned earlier, Traffic is one of my favorite Soderbergh films.  Considering that I usually find Soderbergh’s films to be hit-or-miss, it’s actually kind of remarkable just how effective Traffic is.  The original miniseries, however, is superior to the film in every way.  Some of that is because the miniseries has six hours to explore its world whereas Soderbergh had to cram a lot of incidents into 147 minutes.  Beyond that, the miniseries succeeds because director Alistair Reid takes a straight-foward, no frills approach to telling his story.  Even at his best, Soderbergh has a tendency to be a bit pretentious.  Even though Traffic deals with real-life issues, it never allows you to forget that you’re watching a film.  Traffik, on the other hand, tells its story with an almost documentary-style immediacy.  One need only compare the scenes where Bill Paterson searches for Julia Ormond in Traffik to the scenes where Michael Douglas searches for Erika Christensen in Traffic to see not only the differences between Reid and Soderbergh’s style but also to see why Reid’s more gritty style works better for the story that’s being told.  Whereas Soderbergh can’t resist framing Christensen with a blonde halo when she’s finally rescued by Douglas, Traffik leaves little doubt that Ormond has been through Hell and that, even if she does eventually beat her addictions, she’ll be carrying the scars of her experience for the rest of her life.  Whereas Traffic ended on a note of hope, Traffik ends with the realization that there is no perfect solution.

Traffic and Traffik are both good looks at the destructiveness of both drug abuse and the efforts to treat drug addiction as a crime.  Both are worth watching.

Here are six mini-reviews of six films that I saw in 2016!

Alice Through The Looking Glass (dir by James Bobin)

Personally, I’ve always thought that, as a work of literature, Through The Looking Glass is actually superior to Alice’s Adventures in Wonderland.  That’s largely because Through The Looking Glass is a lot darker than Wonderland and the satire is a lot more fierce.  You wouldn’t know that from watching the latest film adaptation, though.  Alice Through The Looking Glass doesn’t really seem to care much about the source material.  Instead, it’s all about making money and if that means ignoring everything that made the story a classic and instead turning it into a rip-off of every other recent blockbuster, so be it.  At times, I wondered if I was watching a film based on Lewis Carroll or a film based on Suicide Squad.  Well, regardless, the whole enterprise is way too cynical to really enjoy.

(On the plus side, the CGI is fairly well-done.  If you listen, you’ll hear the voice of Alan Rickman.)

I don’t even know where to begin when it comes to describing the plot of Gods of Egypt.  This was one of the most confusing films that I’ve ever seen but then again, I’m also not exactly an expert when it comes to Egyptian mythology.  As far as I could tell, it was about Egyptian Gods fighting some sort of war with each other but I was never quite sure who was who or why they were fighting or anything else.  My ADHD went crazy while I was watching Gods of Egypt.  There were so much plot and so many superfluous distractions that I couldn’t really concentrate on what the Hell was actually going on.

But you know what?  With all that in mind, Gods of Egypt is still not as bad as you’ve heard.  It’s a big and ludicrous film but ultimately, it’s so big and so ludicrous that it becomes oddly charming.  Director Alex Proyas had a definite vision in mind when he made this film and that alone makes Gods of Egypt better than some of the other films that I’m reviewing in this post.

Is Gods of Egypt so bad that its good?  I wouldn’t necessarily say that.  Instead, I would say that it’s so ludicrous that it’s unexpectedly watchable.

Bleh.  Who cares?  I mean, I hate to put it like that but The Huntsman: Winter’s War felt pretty much like every other wannabe blockbuster that was released in April of last year.  Big battles, big cast, big visuals, big production but the movie itself was way too predictable to be interesting.

Did we really need a follow-up to Snow White and The Huntsman?  Judging by this film, we did not.

Me Before You (dir by Thea Sharrock)

Me Before You was assisted suicide propaganda, disguised as a Nicolas Sparks-style love story.  Emilia Clarke is hired to serve as a caregiver to a paralyzed and bitter former banker played by Sam Claflin.  At first they hate each other but then they love each other but it may be too late because Claflin is determined to end his life in Switzerland.  Trying to change his mind, Clarke tries to prove to him that it’s a big beautiful world out there.  Claflin appreciates the effort but it turns out that he really, really wants to die.  It helps, of course, that Switzerland is a really beautiful and romantic country.  I mean, if you’re going to end your life, Switzerland is the place to do it.  Take that, Sea of Trees.

Anyway, Me Before You makes its points with all the subtlety and nuance of a sledge-hammer that’s been borrowed from the Final Exit Network.  It doesn’t help that Clarke and Claflin have next to no chemistry.  Even without all the propaganda, Me Before You would have been forgettable.  The propaganda just pushes the movie over the line that separates mediocre from terrible.

Y’know, the only reason that I’ve put off writing about how much I hated this film is because Garry Marshall died shortly after it was released and I read so many tweets and interviews from people talking about what a nice and sincere guy he was that I actually started to feel guilty for hating his final movie.

Mother’s Day takes place in Atlanta and it deals with a group of people who are all either mothers or dealing with a mother.  The ensemble is made up of familiar faces — Jennifer Aniston, Julia Roberts, Kate Hudson, and others! — but nobody really seems to be making much of an effort to act.  Instead, they simple show up, recite a few lines in whatever their trademark style may be, and then cash their paycheck.  The whole thing feels so incredibly manipulative and shallow and fake that it leaves you wondering if maybe all future holidays should be canceled.

I know Garry Marshall was a great guy but seriously, Mother’s Day is just the worst.

(For a far better movie about Mother’s Day, check out the 2010 film starring Rebecca De Mornay.)

As far as recent Biblical films go, Risen is not that bad.  It takes place shortly after the Crucifixion and stars Joseph Fiennes as a Roman centurion who is assigned to discover why the body of Jesus has disappeared from its tomb.  You can probably guess what happens next.  The film may be a little bit heavy-handed but the Roman Empire is convincingly recreated, Joseph Fiennes gives a pretty good performance, and Kevin Reynolds keeps the action moving quickly.  As a faith-based film that never becomes preachy, Risen is far superior to something like God’s Not Dead 2.