Last month, when I finally watched The Lost City, I had two thoughts.

First off, I thought it was a perfectly charming little movie, a well-made and unpretentious film that went out of its way to entertain its audience and which, for the most part succeeded.  The film, which features Sandra Bullock as Loretta Sage, a reluctant writer of sex-filled romance/adventure novels, and Channing Tatum as Alan Caprison, an earnest but not terrible bright cover model, strikes just the right balance of adventure and comedy.  Bullock and Tatum are charming together.  Brad Pitt has a fun cameo as an ultra-macho wilderness guide who is hired to help track down Bullock after she’s kidnapped by a wealthy businessman who wants her to help him track down the fabled crown of fire.  Daniel Radcliffe gives a nicely eccentric performance as the villain and, for once in his post-Potter career, actually seems to be having fun with a role.  The jungle scenery is lovely to look at.  Bullock’s purple sequin jumpsuit is to die for.  Tatum shows off his physique.  The jokes come fast, the action is exciting, and we get to watch two people fall in love.  What more could one ask for?

My other thought is that The Lost City is a film that Sandra Bullock could have made at any point of her  career.  There’s never been a time when Bullock wouldn’t have been convincing in the role of Loretta Sage.  It’s easy to imagine The Lost City coming out in the aughts, starring Sandra Bullock as Loretta and Brendan Fraser as Alan.  Or perhaps even in the 90s, with Bullock and Matthew McConaughey as Alan.  Much as Top Gun: Maverick does for Tom Cruise, The Lost City serves to remind us that Sandra Bullock is one of the last true film stars, someone who can effortlessly move from genre to genre without losing any of their onscreen charisma in the process.  For audiences who have just spent the last two years being told that the world was collapsing and that nothing would ever be the same again, there is something undoubtedly comforting about films like Top Gun: Maverick and The Lost City.  They are a reminder that yes, it is permissible, possible, and even necessary to just have a good time.

And have no doubt about it, The Lost City is definitely a good time.  From the opening scene (which literally takes us into one of Loretta’s novels) to Loretta’s disastrous book tour to the eventual journey through the jungle, The Lost City is an entertaining film.  It’s not a film that asks for much from the audience.  There’s no complicated backstory.  It’s not necessary to have seen 10 earlier movies and a miniseries to understand everyone’s motivations.  There’s no bad CGI to challenge the audience’s willingness to buy into the story.  The film gets the job done in a relatively brisk 112 minutes and, at a time when even comedies are regularly running over two hours, it’s hard not to appreciate the efficiency with which The Lost City tells its story.  There is a mid-credits scene but it’s actually kind of funny.  For once, the promise of a sequel feels likes something for which to look forward.

If you missed The Lost City in theaters, it can currently be viewed on Paramount Plus. 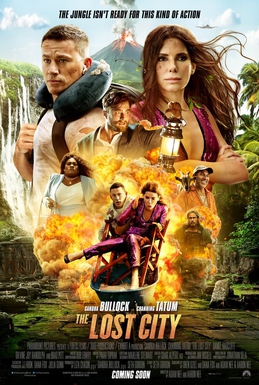 One response to “Film Review: The Lost City (dir by Adam and Aaron Nee)”