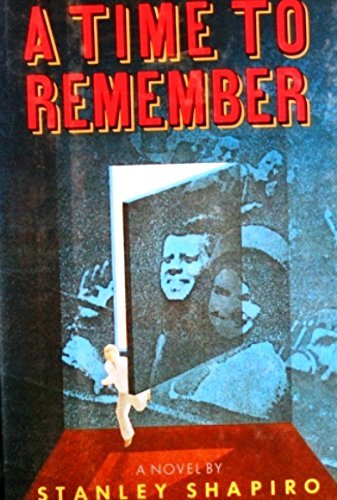 My aunt has always been a prodigious reader and, when I was growing up, I always enjoyed looking through the stacks of books that she had sitting in the closets of her room. A few years ago, for medical reasons, my aunt had to move out of her house. Because she wouldn’t have room for all of her books in her new place, she gave the majority of them to me. So far, I’ve only read a few but, over the course of this year, I plan to read all of them and review the ones that I like or, at the very least, find interesting. That was one of the resolutions that I made on January 1st and I have to admit that I haven’t really been doing a great job keeping up with it.  Hopefully, I’ll do better during the second half of the year.

This week, from my aunt’s book collection, I read Stanley Shapiro’s A Time To Remember.

A Time To Remember was originally published in 1986 and it tells a story that might sound a little bit familiar.  David Russell is a school teacher in Dallas.  He is haunted by the death of his brother, who was killed in Vietnam.  David has convinced himself that, if John F. Kennedy had lived, America would have withdrawn from Vietnam and his brother would still be alive.  In fact, as far as David is concerned, America itself would be a better place if Kennedy had lived.  Not only would the Vietnam War have been prevented but the Watergate break-in would never have occurred.  Nixon would never have been president.  Martin Luther King would never have been assassinated.  Robert F. Kennedy would still be alive.  Americans would never have become disillusioned with their country or their government.  America would have kept its innocence.

Too bad that David can’t do anything to change history.

Or can he?  It turns out that David’s girlfriend is a reporter and she knows a scientist named Dr. Hendrik Koopman.  Koopman has created a time machine!  David uses the machine to go to the past, intent on preventing Lee Harvey Oswald from assassinating Kennedy.  (Sorry, conspiracy folks.  Like me, A Time To Remember is firmly in the Oswald Acted Alone camp.)  Unfortunately, David doesn’t succeed and he ends up getting arrested in Oswald’s place!  Now, David has to not only escape but he also still has to find a way to save Kennedy!

Obviously, the plot is a bit similar to Stephen King’s 11/23/63.  That’s not to say that King deliberately plagiarized or even knew of the existence of Shaprio’s earlier novel.  Not only do the two books take vastly different approaches to the material but the idea of saving America by saving JFK has long been a popular one amongst the boomers.  That said, it’s interesting that it was King, who plays the epitome of a committed 60s liberal on Twitter, who wrote the book that was more skeptical about whether or not saving Kennedy would truly save the world.  Shapiro takes a much simpler approach to the material, one that’s almost charmingly naïve.  I’m fairly agnostic on whether or not JFK would have been a transformative or even a well-remembered President if he had lived but one doesn’t necessarily have to buy into the mythology that’s sprung up around JFK to appreciate the sincerity of Shapiro’s idealization of the man and the era that he represented.  Just as 11/23/63 was redeemed by King’s cynicism, A Time To Remember is redeemed by Shapiro’s nostalgia.

Shapiro, it should be noted, also tells his story far more quickly and far more economically than King did.  11/23/63 runs for close to 900 pages.  A Time To Remember doesn’t even make it to 200.  It’s a book that you can read in one sitting and Shapiro keeps the story moving at a quick pace.  Though the characters aren’t particularly deep and one can certainly debate the book’s conclusion, Shapiro tells the story well.  Those who like to play “What If?” with history will appreciate the book.

One response to “Book Review: A Time To Remember by Stanley Shapiro”