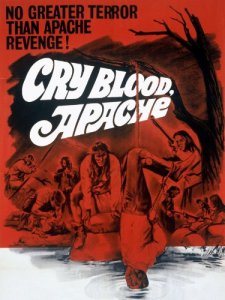 A group of old west outlaws stumble across an Apache camp.  Though everyone’s friendly at first, the outlaws discover that the Apaches have gold so they kill all of the Apaches except for one, Jemme (Maria Gahua).  They drag Jemme off with them, intent on having their way with her after forcing her to lead them to more gold.  Only one member of the gang, Pitcallin (Jody McCrea), is willing to protect Jemme and treat her with kindness.  (In fact, Pitcallin is such a nice and decent person that it doesn’t make any sense for him to be riding with the outlaws in the first place.)  Meanwhile, Jemme’s brother (Marcus Rudnick) discovers the camp and, upon discovering his family dead, cries and screams for several minutes.  Then he sets off for revenge against the gang.

The best thing about Cry Blood, Apache is that it opens with Joel McCrea, father of Jody, playing the elderly Pitcallin and riding his horse to the where the old Apache camp used to be.  While the old Pitcallin is looking around, he hears the voices of the former members of the gang and then the rest of the film is told in flashback.  This makes it seem like Cry Blood, Apache is going to be about an old outlaw coming to terms with the terrible things that happened in the past.  Unfortunately, Joel McCrea’s only in the movie for about two minutes and since the movie sat on the shelf for three years before it was finally released, it’s probable that his scenes were shot long after the rest of the movie.  Along with starring in the film, Jody McCrea also produced it and Joel probably only agreed to lend some star power to the movie as a favor to his son.  But teasing western fans with Joel McCrea, just to then bring out Jody McCrea is just plain unfair.

Other than the opening scenes with Joel McCrea, the rest of this film is so poorly put together that it’s a struggle to sit through.  Cry Blood, Apache is edited in such a haphazard manner that it’s nearly impossible to follow the plot.  While the gang searches for more gold, Jemme’s brother searches for the gang but the film never makes it clear how close the brother is to finding the gang so there’s zero suspense generated.  Jody McCrea was too naturally amiable to play a believable outlaw.  There was nothing tough about him.  Meanwhile, both Marcus Rudnick and Maria Gahua overact to such an extent that scenes that should be emotionally wrenching become unintentionally humorous instead.

Cry Blood, Apache was directed by Jack Starrett, who went on to direct far better movies than this one.  He also appears in the film as a member of the gang, the bible-quoting Deacon.  Even though he’s got long hair and is considerably younger in his film, most viewers will hear his voice and immediately recognize him as Galt, the sadistic cop from First Blood.

One response to “Cry Blood, Apache (1970, directed by Jack Starrett)”