One day, as the American Civil War is drawing to a close, a group of outlaws besiege a homesteader’s cabin.  While they allow the homestead to survive, they kill his maid, Martha (Kathyrn Jackson) and they kidnap his mail order bride (Brenda Venus).  The very next day, Martha’s son, Joshua (Fred Williamson), arrives home from serving in the Union Army.  As soon as Joshua find out what has happened, he grabs his late father’s rifle, jumps on his horse, and set off for revenge.  When the sheriff warns him that the gang is violent, bloodthirsty, and large, Joshua replies, “I just finished fighting a war, Sheriff.  I’ve killed twice that.”

Joshua finds Fred Williamson doing what he does best.  Dressed in all black and not showing a hint of emotion, Williamson dominates the screen as he rides across the countryside and finds creative ways to kill the members of the gang.  Along the way, he also meets and has a brief fling with Maria (Isela Vega), a female gunslinger.  Even though Joshua proves time and again that he can handle himself while fighting several men at once, he chooses to take the members of the gang out one-by-one.  He savors getting his revenge, as only Fred Williamson could.  (Also, if Joshua took out the entire gang at one time, it would be a really short movie.)

Williamson wrote the script for Joshua and produced it through his own production company.  That probably explains why no one else in the film really has a chance against Joshua.  There’s really nothing, from firing a gun to battling a rattlesnake to tracking a group of cold-blooded killers, that Joshua doesn’t do well.   Not a lot happens in Joshua but Williamson does a good job of playing the taciturn title character and he nails the scene where he tells a naive cowboy that killing is not something to take likely.  As always, Fred Williamson is the epitome of cool.  Unfortunately, the film drags whenever Williamson isn’t on screen and the members of the gang are pretty much indistinguishable from each other.  People looking for a serious or realistic western will be disappointed but if you just want to watch Fred Williamson be Fred Williamson for 90 minutes, Joshua fits the bill.

Today, we wish a happy birthday to the one and only Raquel Welch! 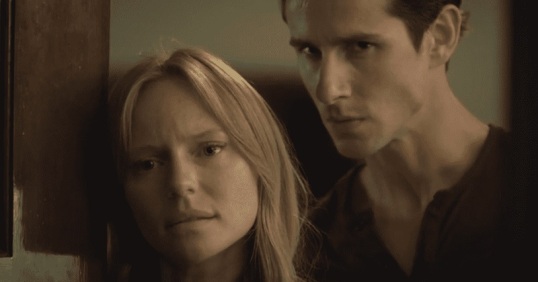 Also known as Sinister Savior, this film tells the story of Karen (Marci Miller), an emergency room doctor and a recovering alcoholic.  One night, as she’s leaving an AA meeting, she’s attacked by an apparent mugger.  Fortunately, for her, Daniel (Kelly Blatz), just happens to be walking by the scene.  He steps forward and fights off Karen’s attacker, probably saving her life in the process.  However, during the fight, Daniel’s arm gets slashed with a knife.

Being a doctor (and, according to her best friend, also being way too trusting), Karen takes Daniel back to her house so that she can take a look at his wounded arm.  Daniel seems friendly-enough.  He says that he’s in real estate and that the reason he was in the neighborhood was because he was checking out potential properties to buy and sell.  Daniel also tells Karen that he’s never been in a real fight before.

Daniel, it turns out, already has several scars.  When Karen notices them and asks about them, Daniel says that he got them in a bar fight.  But …. uhmm, Daniel ….. you said you’d never been in a real fight before.  Daniel quickly explains that he wasn’t actually in the fight, he just got stabbed accidentally.  That may make sense but, even if Daniel isn’t lying about his past history, why does he have pictures of Karen’s house on his phone?

For those of us watching, red flags start to go up as soon as Daniel shows up.  That’s because this is a Lifetime film and, if you’ve seen enough of these films, you know better than to trust any good Samaritans.  The fact that this movie is called Sinister Stalker gives us another reason not trust Daniel.  When Daniel starts to talk about how much he and Karen have in common and makes a rather awkward joke about how they must have a connection, those of us in the audience are like, “Get out of there!”

But, of course, if Karen did that, there wouldn’t be a movie.  So, instead, Karen does stuff like take a shower while there’s a complete stranger hanging out in her home.  Meanwhile, Daniel is walking around the house and basically invading her space.  Various friends of Karen come by to check on her and Daniel tries to send them all away.  We know that there’s something not right about Daniel.  It’s just a question of how long it’s going to take Karen to figure that out as well.

Though the story may be familiar, Sinister Stalker does experiment a little with the typical Lifetime format.  As opposed to most Lifetime films, which usually take place over several days and typically feature a lot of visits to the neighborhood coffeeshop and at least one yoga class, the action in Sinister Stalker takes place in one location and over the course of just one night.  The film almost seems to play out in real time, which actually pays off surprisingly well.  The film actually does a petty good job of generating some suspense as to how long it’s going to take Karen to figure out that Daniel’s motives are not exactly pure.

Kelly Blatz is perhaps a little bit too obviously sinister as Daniel but Marci Miller does a great job in the role of Karen.  She plays up Karen’s hesitation just enough to suggest that she had her doubts about Daniel from the beginning but, at the same time, she also feels that she has an obligation — as both a doctor and someone whose life was saved by Daniel — to check out the wound on his arm.  In the small but important role of an alcoholic who keeps calling Karen for help, Lew Temple makes a good and sympathetic impression.

Sinister Stalker plays with the typical Lifetime format and, for the most part, it pays off.  Watch it the next time you’re tempted to let a complete stranger hang out in your house for a few hours.

Since today is Werner Herzog’s birthday, I thought I would share a Herzog scene that I love.

Herzog is such an iconic and eccentric figure that I think there’s a tendency to overlook just how good of a director and a storyteller he actually is.  People just tend to think of him as being the man with the German accent who makes random comments about how the universe is governed by chaos.

But, he’s actually a brilliant director as well and if you need proof, just watch his 1972 film, Aguirre, The Wrath of God.  The scene below is actually from the final few minutes of the film so I guess it’s technically a spoiler if you haven’t seen the film yet.  That said, people who get upset about spoilers are wimps.

Klaus Kinski plays Aguirre, a Spanish conquistador who attempts to conquer the South America by floating down the Amazon River.  Things don’t quite go the way that he intended.  By the end of the film, all of his man are dead and a large amount of monkeys are congregating on his raft.  Has Aguirre conquered the monkeys or have they conquered him?

That’s up to the viewer to decide.


This song was supposedly written on a train ride from Philadelphia to New York City.  Having played a killer show in Philly, the band was riding the train back home when they noticed some members of the crew were starting to fall asleep.  To keep everyone awake, the Beastie Boys started to chant, “No sleep till Brooklyn!”

(The name of the song is also a play on the title of Motörhead’s No Sleep ’til Hammersmith.)

The song is one of the band’s signature tunes and the video features the Beastie Boys when they were young, rebellious, and didn’t care who they pissed off.  The video parodied that type of glam rock (think Poison, for example) that was popular in 1987.

The video was directed by Adam Dubin and Ric Menello, who previously directed the video for (You Gotta) Fight For Your Right (To Party).  Menello also plays the club owner who rejects the band at the start of the video.