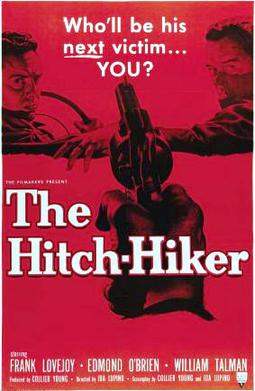 The intense 1953 film noir, The Hitch-Hiker, begins with news of a murderer at large.

His name is Emmett Myers (William Talman).  He’s the rough-looking man who you might occasionally see standing by the side of the road, asking for a ride with his thumb outstretched.  For me, it only takes one look at Myers’s unfriendly face and his shifty eyes to know that I would never slow down to give him a ride.  However, The Hitch-Hiker takes place in a more innocent era, at a time when everyone wanted to be of help.  Anyone who gives Emmett a ride ends up dead.  He steals their cars and then drives across country, abandoning the car only when he learns that his previous murder has been discovered.  Emmett has hitchhiked from Illinois to Southern California and he’s left a trail of dead bodies behind him.

Roy Collins (Edmond O’Brien) and Gilbert Bowen (Frank Lovejoy) don’t know who Emmett is.  They’ve missed all of the reports about Emmett’s killing spree.  They haven’t read the newspapers, all of which feature a picture of Emmett on the front page and a warning to never pick him up.  Roy and Gilbert have been too busy getting ready for a long-planned fishing trip in Baja California.  When they see Emmett hitchhiking in Mexico, they pull over and offer him a ride.

Unlike other movie hitchhikers, Emmett doesn’t waste any time before revealing who he is.  As soon as he gets in the car, he pulls a gun and tells the two men that they’re going to drive him deeper into Baja California.  He’s got a boat to catch and he says that all the two men have to do is follow orders.  Of course, both Roy and Gilbert know better.  They know that Emmett’s planning on killing them as soon as they arrive at their destination.  In fact, if Emmett learns that the police are looking for the two men, he’ll kill them sooner.  Roy and Gilbert not only have to keep Emmett from flying off the handle but they also have to keep him from discovering that both of them have been reported as being missing.

As the three men drive across California, Emmett continues to taunt his prisoners.  Repeatedly, he points out that the only reason they’re in this situation is because of their loyalty to each other.  As Emmett explains it, if the two men tried to run in opposite directions, Emmett would probably only be able to kill one of them.  If the two men both attacked him, Emmett would again probably only have time to kill one before the survivor subdued him.  Will Roy and Gilbert remains loyal to each other or will they finally embrace Emmett’s philosophy of every man for himself?

Oh, how you’ll hate Emmett Myers!  As played by William Talman, Emmett is not just a criminal but a bully as well.  The enjoyment that he gets out of taunting Roy and Gilbert will make your skin crawl.  Emmett is hardly the type of witty or charming master criminal who often shows up in movies today.  Instead, The Hitch-Hiker emphasizes that Emmett’s an idiot but, because he has the gun, he has the power.  Edmond O’Brien and Frank Lovejoy are also well-cast as the two friends who are forced to choose between survival and loyalty.

The Hitch-Hiker was one of the few films to be directed by a woman in the 1950s.  (It’s generally considered to be the only film noir to have been directed by a woman.)  Ida Lupino was not only an actress but also the only female director in the old Hollywood system and she made several hard-hitting films, the majority of which dealt with the type of issues that mainstream Hollywood was still too scared to handle.  With The Hitch-Hiker, Lupino emphasizes not only Emmett’s cruelty but also the bonds of friendship between Emmett’s two hostages.  Visually, she makes the wide open desert appears as menacing and as dangerous as any shadowy city street.  If urban noirs often suggested that threats could be hiding anywhere, The Hitch-Hiker takes the opposite approach.  The threat is in the back seat of the car and there’s literally no place to hide.

The Hitch-Hiker is an intense film that holds up well today.  Watch it below and never again make the mistake of helping out a stranger.

I know it’s popular these days among a certain coterie of Comic Book Buffs to bash Stan Lee’s contributions to the medium in favor of artist/collaborators Jack Kirby and Steve Ditko . You’ll never find me in that crowd. Not ever. I learned to read (with the help of my dad) at the tender age of three through comics… simple stuff at first, funny books like YOGI BEAR and BEETLE BAILEY. As I progressed into the realm of superheroes, my vocabulary improved thanks to writers like Gardner Fox, John Broome, and especially Stan Lee, who took me to Asgard and Outer Space with Shakespearean-styled dialog and college-level words that made me keep a dictionary always at the ready. Screw you, Dr. Frederic Wertham!! 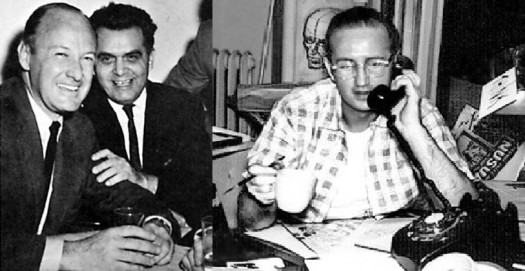 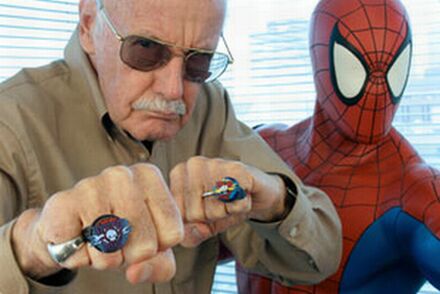 At first, Stanley’s job was just to get coffee, make sure that the inkwells were full, and occasionally proofread copy.  In 1941, when the third issue of Captain American Comics needed a text story so that it could be shipped as a magazine instead of just as a comic book, Stanley was assigned the job.  Because the young man had an ambition to some day write the great American novel and felt that being associated with comic books would make it more difficult to convince publishers to take him seriously, Stanley Lieber wrote the story under a pseudonym, Stan Lee.

And the rest, as they say, is history.  Timely eventually became Atlas and then Atlas was rebranded Marvel and, through it all, Stan Lee remained at the company, providing continuity from one decade to another.  Ironically, for someone who originally feared being too associated with comic books, Stan Lee went on to become not only the face but, for several decades, the voice of Marvel Comics.

Among comic book historians, Stan Lee is an often divisive figure.  By his own admission, Lee loved the spotlight and it can be argued that he unfairly overshadowed his publicity-shy colleagues.  To solely give Lee the credit for creating characters like Spider-Man and the Fantastic Four does a disservice to the work of artists and writers like Jack Kirby, Steve Ditko and so many others.  As a company, Marvel has a deserved reputation for not treating its artists with the respect or the financial compensation that they deserved.  How much of the responsibility for any of that falls on Lee’s shoulders is a controversial subject and will continue to be so for years to come.

What isn’t controversial was that,  whether he hitting the college lecture circuit, recording the introductions for the animated Spider-Man and His Amazing Friends TV show, or giving interviews with publications like Playboy and Rolling Stone, there was never a bigger cheerleader for comic books than Stan Lee.  At a time when DC comics was busy imitating the campy Batman TV show, Marvel Comics were, in their own way, dealing with world in which their readers lived.  From the platform of Stan’s Soap Box, Stan Lee spoke against racism and prejudice.  When the U.S. Department of Health, Education, and Welfare approached Lee to do a story about the dangers of drug abuse, Lee did it in defiance of the Comic Codes Authority.  Three issues of Spider-Man were released without the CAA’s seal of approval, opening the way for all comic books to deal with real world issues. 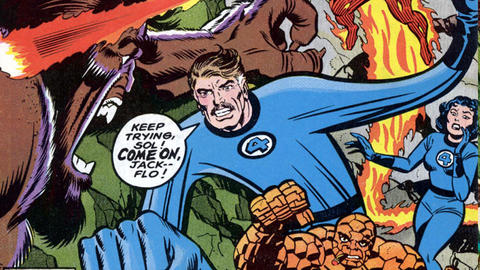 Stan Lee as Mr. Fantastic in What If #11 (as drawn by Jack Kirby)

For many comic book readers who might have otherwise felt that they didn’t fit in, Stan Lee said, “Here, you do belong.”  Today, it might seem easy to poke fun at Lee’s endless enthusiasm, his cries of “excelsior,” and the way that he called Marvel readers “true believers.”  But for many readers,  there was much comfort to be found in Lee’s corny sayings.  Lee had a way of making readers feel as if they were all in it together.  Whether you were a true believer or a member of the Merry Marvel Marching Society, you belonged.  For kids who felt like outsiders, Lee was there to tell them that everyone was capable of being a hero, whether they had super powers or not.

In his twilight years, Lee was rediscovered by a new generation of fans.  Spotting Lee’s trademark cameos became one of the pleasures of watching any Marvel film.  Sometimes, he was a postman.  In Deadpool, he worked in a strip club.  More than once, he was a janitor.  I once saw him driving a bus.  In the second Guardians of the Galaxy film, he was sitting on the moon and telling the Watchers about his adventures on Earth and it just seemed like he was right where he belonged.

Stan Lee passed away today at the age of 95.

I knew I’d have to write this some day but I always hoped it wouldn’t be any time soon.

Critics of John Wayne gave him a lot of flak for not serving his country during World War II, especially in the turbulent 1960’s, labeling him a phony patriot and celluloid warrior. The truth is Wayne DID try to get into the war, but was stymied in his attempts on two fronts: Republic Studios boss Herbert Yates, who filed for deferments so he wouldn’t lose his cash cow, and Wayne’s first wife Josie, who failed to forward letters from OSS Chief Wild Bill Donovan’s office. Be that as it may, The Duke was no phony, and did what he could on the home front for the war effort.

SANDS OF IWO JIMA was made four years after the war as a tribute to the brave souls of the United States Marine Corps who fought against the Japanese in the South Pacific. Wayne plays the tough top kick Sgt. John Stryker…


As is the case with many of New Order’s songs, the meaning of True Faith depends on who you ask.

True Faith has long been assumed to be about the sense of detachment felt by users of heroin, an interpretation that was denied by New Order’s bassist, Peter Hook.  As he told Songfacts, “‘True Faith’ features some of the best New Order lyrics in my opinion, but no, it is not about heroin, that is not something that any of our lyrics ever touched on. I think it’s clear to see though that the lyrics do reflect being under some sort of influence.”

However, in an interview with Q Magazine, lead singer Bernard Sumner said that, though he had never used heroin, he still wrote True Faith from the perspective of someone who had.

Regardless of what it’s about, True Faith is one of New Order’s most popular songs.  It’s my second favorite, after Blue Monday.

As for the video, it was directed by the French mime, dancer, and choreographer, Philippe Decouflé.  Starting with a slap fight to end all slap fights, it also features a person in green makeup hand signing the song’s lyrics.  According to Wikipedia, the video was inspired by an earlier video performance piece that was done by the Serbian performance artists, Marina Abramović and Ulay.  I’ll have to take Wikipedia’s word on that.

Philippe Decouflé went on to direct the video for the Fine Young Cannibals’ She Drives Me Crazy, as well as choreographing the opening ceremony of the 1992 Winter Olympics.