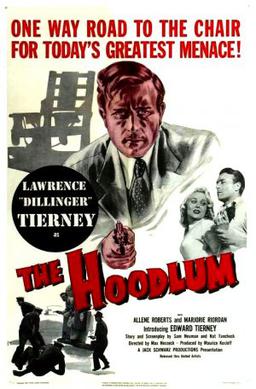 At the start of the 1951 film, The Hoodlum, Vincent (played by the legendary Lawrence Tierney) is rotting away in prison.  Even though the parole board is considering whether or not to release him, things aren’t looking good for Vincent.  The warden (Gene Roth) has taken it upon himself to attend the parole hearing and remind them of Vincent’s long criminal record.  Vincent’s been in trouble for as long as he’s been alive.  The warden says that allowing Vincent to walk the streets will just make the streets even more unsafe.

However, Vincent’s mother (Lisa Golm) swears that she’ll keep an eye on Vincent.  She will give Vincent a place to live and she’s even arranged for Vincent to get a job at the family gas station, where he’ll be working under his brother, Johnny (played Lawrence’s younger brother, Edward Tienery).  Moved by a mother’s tears, the board grants Vincent parole.

Big mistake.  As soon as Vincent’s out of prison, he starts making plans to return to his old life.  He has no interest in working in a gas station and he resents Johnny’s success.  Vincent is the type of bum that steals his brother’s girlfriend, gets her pregnant, and doesn’t feel the least bit guilty when she jumps off a roof to her death.

Vincent’s also the type who always has a scheme going.  For instance, it turns out that his brother’s gas station is right across the street from both the town mortuary and the bank!  Soon, Vincent is hanging out with his old gang and plotting to rob an armored car.  Vincent’s not going to let anyone stand in his way.  Not the police.  Not his lover.  Not even his own brother.  The only person that Vincent seems to care about is his sickly mother and, even then, Vincent doesn’t actually care enough to stay out of trouble.

The Hoodlum is a low-budget gangster noir.  It’s only an hour long so it doesn’t waste any time.  Instead, it jumps straight into its often sordid story.  From the minute that Vincent gets out of prison, he’s greedily watching that bank and telling off anyone who looks at him funny.  What makes Vincent an especially despicable character is that he’s not even good at what he does.  If Vincent was some sort of criminal mastermind, you could at least get some sort of guilty pleasure out of watching him rob that armored car.  Instead, Vincent’s an idiot who not only messes up everything that he does but who isn’t even smart enough to understand that he’s screwed up.

Fortunately, Vincent is played by Lawrence Tierney.  Tierney was a veteran tough guy, an actor who played killers onscreen and who spent a good deal of his offscreen time sitting in jail.  (Tierney had a bad habit of getting into bar brawls.)  In the role of Vincent, Tierney is a force of pure, uninhibited destructive energy.  When he glares at his brother, you feel the resentment.  When he rushes at a security guard while holding a gun, you never doubt that he’s capable of using it.  Tierney gives such a raw and angry performance that you can’t stop watching him.  Vincent quickly overstays his welcome but Tierney remains a fascinating actor.

The Hoodlum is a short and brutal little movie, one that works best as a showcase for the intimidating talent of Lawrence Tierney.


This video has kind of a Purge feel to it.  It also has a Mad Max: Fury Road feel to it, as well.

Watching this video, I thought about all of the times that I’ve been tempted to tap the bumper of someone in front of me.  That may sound like an extreme overreaction to the stress of driving but anyone who has ever been on North Central Expressway will know what I’m talking about.

When I wasn’t thinking about road rage, I found myself thinking about those terrible Liberty Mutual commercials.  Those are the commercials where people stand in front of the Statue of Liberty and talk about how its unfair that they should be penalized just because they can’t drive.  Right now, there’s one that features a woman talking about how she was in an accident but the other car got a scratch so minor, it could be fixed with a pen.  Because, seriously, who doesn’t want to mark up their car after some moron runs into it?

Even worse is the guy who says that if your insurance won’t pay the full value of your car, you’re better off just throwing your wallet right into the harbor.  And then he does just that and mutters, “I’m going to regret that.”  No shit, idiot!  Why am I listening to you about car insurance when you don’t even have the impulse control not to throw your wallet in the harbor!?