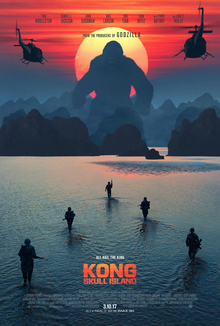 You may have noticed that, in the title of this post, I specifically referred to Kong: Skull Island as being a Halloween film but not a horror film.

That was very much intentional on my part.  Kong: Skull Island is really not a horror film.  (I think you could argue that the only King Kong film that can legitimately be considered a horror film would be Peter Jackson’s version and that’s just because he tossed in a few scenes that were obviously inspired by the old Italian cannibal films.)  I watched Kong: Skull Island a few months ago and I really can’t say that there was ever a moment where I was scared or even uneasy.  It’s just not that type of film.

At the same time, it is a fantastically fun and entertaining monster movie, one that has a good sense of humor about its own absurdity.  Halloween is not just a time to get scared.  It’s also a time to have fun and, for that reason, Kong: Skull Island is a perfect movie for October.  In fact, I think that it was actually a mistake for Warner Bros. to release the film in March.  They should have released it during the first weekend of October.  It could have provided a counterbalance to all of the depressing films that have been released this month,

Kong: Skull Island is a throwback to the gleefully absurd monster movies of the past.  Just so we don’t miss that point, the film starts with a 1944 prologue before then jumping forward to 1973.  (Significantly, not a single scene takes place in the 21st Century.)  Samuel L. Jackson plays Lt. Col. Preston Packard, the tough, no-nonsense commander of the Sky Devils helicopter squadron.  The Sky Devils are finally on the verge of leaving Vietnam but they’ve been asked to carry out on more mission.  They’ve been asked to fly an expedition over a newly discovered island.  The official story is that they’re going to be mapping the island but everyone knows better than to trust the government.

Kong: Skull Island is very well-cast, which is a good thing because the majority of the characters are thinly written.  Among the civilians in the helicopters: Tom Hiddleston, Brie Larson, and John Goodman.  Of course, they’re all playing characters but, for the most part, you’ll spend the entire movie thinking of them as being Tom Hiddleston, Brie Larson, and John Goodman.  For that matter, you never think of Samuel L. Jackson as being Preston Packard.  He simply is Samuel L. Jackson.  When they eventually discover a castaway living on the island, it doesn’t matter that the man’s “name” is supposedly Hank Marlow.  He’s played by john C. Reilly and that’s who you’ll always think of him as being.   They’re all charismatic actors so you certainly don’t mind watching them but, at the same time, the film understands that the main reason we’re all here is to see the giant gorilla.

To the film’s credit, it doesn’t take long for King Kong to show up.  This is not one of those films where things are dragged out in an unnecessary attempt to create suspense.  (After all, the audience already knows that King Kong’s on the island.)  Almost as soon as the helicopters breach the airspace over Skull Island, Kong shows up and starts knocking them out of the sky.  The survivors end up stranded on different parts of the island.

Of course, it’s not just Kong that they have to worry about.  In fact, from the start, the audience is smart enough to know that Kong is actually one of the good monsters.  However, Skull Island is also inhabited by bad monsters, like these giant reptiles that Kong keeps having to fight.

Early on, there’s a scene in America where, in regards to the Watergate scandal, John Goodman says that Washington, D.C. is never going to be more screwed up than it is at that moment.  That line pretty much epitomizes Kong: Skull Island.  It’s a lark with a knowing sense of humor and it is not meant to be taken at all seriously.  At it’s best, Kong: Skull Island satirizes some of the most pompous monster movies of the past.  Whenever someone says something portentous, you can be sure that the film will quickly find a way to puncture the somber mood.

And it’s all terrifically entertaining.  Watch, enjoy, and don’t worry too much about whether or not any of it makes sense.  A trip to Skull Island is a trip worth taking.