Today’s Harry Dean Stanton video is doubly-sad. That’s because we not only have the recently departed Stanton.

We also have Justin Pierce four years before his suicide. You would know him from Kids (1995).

Talia Shire shows up in the video as well. 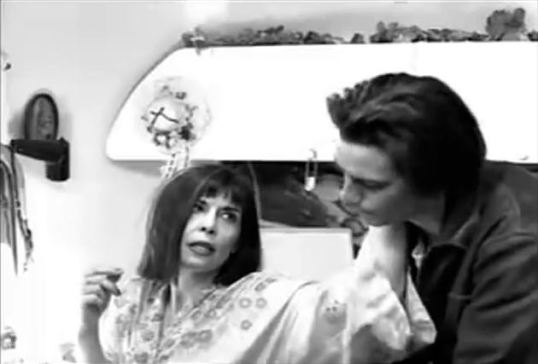 I don’t know anyone else in the video other than lead-singer David Lowry. Thank goodness for Wikipedia. I knew of Cracker because of the song Low. I knew of Camper Van Beethoven because of the song Take The Skinheads Bowling. But I would have never noticed that Lowry fronted both bands even though it’s obvious to me now listening to this song and Take The Skinheads Bowling.

that is doing her best Rob Halford.

Heading Out To The Highway by Judas Priest (1981)

She is prominently featured, but all I could find is that Harry Dean Stanton did two more music videos than I originally thought. It never fails. I’ll do them as well.

The video was directed by Samuel Bayer of…

Smells Like Teen Spirit by Nirvana fame. Did Lowry ask for the Cobain treatment? In addition, I know Bayer directed Bullet With Butterfly Wings one year prior to this one. Still, was Goth-Stanton something people were clamoring for?

I mean he looks like Lars Ulrich in Until It Sleeps.

Yes, that one was also directed by Bayer. And if you are thinking he probably directed some videos for Garbage and Hole based on the woman I couldn’t identify, then you’d be right.

The casting director on this one was Crystal Lujan. Her music video credits alone are close to 100. She has done some acting too. I guess she was one of the cult members in that unfortunate Clive Barker movie with Scott Bakula, Lord Of Illusions (1995).

7 responses to “Music Video of the Day: Nothing To Believe In by Cracker (1996, dir. Samuel Bayer)”