Last night, Drink Slay Love was not the only Lifetime premiere that I watched.  I also watched Ten Murder Island! 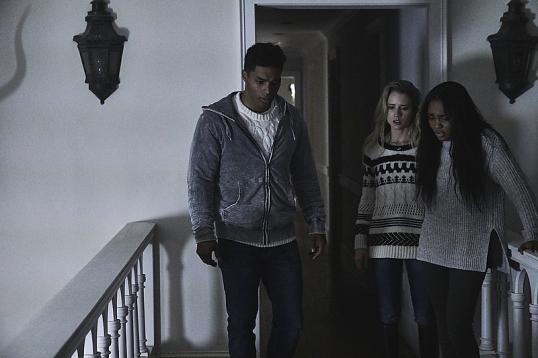 The obvious answer, of course, is that it was on Lifetime and, whenever I review a Lifetime film, this site gets an upsurge in clicks.

But, beyond that, I liked the commercials for Ten: Murder Island.  They looked moody and atmospheric.  When I read that the movie was about ten people being stalked and murdered on an island, I immediately was reminded of Harper Island, a.k.a. the scariest TV show ever.  How could I not watch, right?

Ten teenagers have gathered at a house that’s located on an isolated island.  They’re throwing a weekend party but a storm not only knocks out all the power but also everyone’s phone signal.  Add to that, someone on the island is killing everyone, one by one.  Uh-oh!

Why are they being targeted?  Does it have anything to do with Claire Hicks, an unpopular student who committed suicide shortly after homecoming?  Considering that pages ripped from her journal keep appearing at every murder scene, that would seem to be a safe bet.  Will the smart and studious (and kinda boring) Meg (China Anne McClain) be able to figure out what’s happening before everyone’s dead?  And will her pseudo-boyfriend TJ (Rome Flynn) ever come clean about what happened at homecoming?

Both the house and the island were well-chosen locations and, visually, the film had a memorably spooky atmosphere.  If nothing else, while you were watching Ten, you were convinced that anyone could die at any moment.  No one seemed to be safe.  The deaths themselves were, for a Lifetime film, surprisingly graphic and rather mean-spirited.  This killer wasn’t missing around.

I especially liked the flashback scenes that accompanied the reading of Claire’s journals.  They were well-handled, with everyone’s face literally scratched out and obscured, keeping you guessing as to who Claire was writing about.

As I watched Ten: Murder Island, I couldn’t help but be bothered by the fact that no one on the island really seemed to be that upset by the fact that all of their friends were being brutally and gruesomely murderer.  Meg and TJ would get upset whenever they stumbled across a body but, in the very next scene, they would be laughing and flirting and teasing each other about homecoming.

This movie also featured a truly cringeworthy line that was uttered right after Meg learned the terrible truth about what happened at homecoming.  After learning about a truly terrible thing that happened, Meg turns to TJ and exclaims, in all sincerity, “I didn’t realize I meant that much to you!”  Now, I can’t say too much without spoiling the movie but, just to indicate how inappropriate this response felt, this is what I tweeted as soon as I heard the line:

"I didn't know I meant that much to you." WAIT — that's your reaction to that story!? #TenMurderIsland

I mean, it’s generally accepted that the majority of characters in a movie like this are going to be douchebags but Ten: Murder Island really abused the privilege.

I totally related to Kumiko (Annie Q), who was the sarcastic girl who had no hesitation about accusing Meg of being a murderer and who seemed to be more annoyed than terrified by the all the lethal drama going on around her.

There’s only one Harper’s Island.