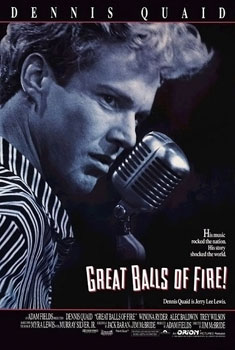 In the 1950s, Jerry Lee Lewis (Dennis Quaid) plays what his cousin, Jimmy Swaggart (Alec Baldwin), calls the devil’s music.  After signing a contract with Sam Phillips (Trey Wilson), Jerry becomes a star with his wild man persona and crazed piano playing.  When Elvis is drafted, it appears that Jerry is destined to take over as the new King of Rock and Roll.  But, then, while touring England, the press discovers that Jerry is married to his 13 year-old cousin, Myra (Winona Ryder).  When Jerry refuses to apologize for his private life, his career falls apart.

The real Jerry Lew Lewis has stated many times that he hates this musical biopic and that it has very little in common with his actual life.  Jerry has a point.  Great Balls of Fire is a highly stylized film, one that greatly sanitizes both the life of Jerry Lee Lewis and the early days of rock and roll.  In the film, there’s no struggle or even hard work on the road to becoming a star.  Jerry just drops off a recording of himself playing piano and viola! He’s a star!  Soon, teenagers are dancing around his convertible, both civil rights protestors and white Southern cops start dancing whenever they see him driving down the street, the local radio DJ waves whenever he sees them, and Jerry’s sneaking into Mississippi so that he can marry his thirteen year-old cousin.

Great Balls of Fire! takes a superficially mater of fact approach to Jerry’s marriage to Myra, neither condemning nor excusing, though it does cheat by casting the 18 year-old Winona Ryder as the 13 year-old Myra.  (If the film had cast an actress who was closer to Myra’s actual age, Great Balls of Fire! would never have been released.)  Fortunately, history helped the movie out by making Jimmy Swaggart into Jerry’s main critic.  Alec Baldwin’s performance as Jimmy Swaggart makes his interpretation of Donald Trump look subtle, nuanced, and award-worthy.

Dennis Quaid, at the height of his 80s stardom, is ideally cast as Jerry Lee Lewis, giving a good if broad performance and doing a convincing job lip-syncing to the music.  Quaid has said that he was struggling with an addiction to cocaine while filming Great Balls of Fire! and that might have made him the perfect actor to play the always conflicted and always wild Jerry Lee Lewis.  The best thing about the film is that Jerry Lee Lewis provided the music, re-recording his best known songs.  While the movie may not tell the true story of Jerry Lee Lewis, it does feature enough of his music that it is obvious why Jerry Lee Lewis nearly became the king of rock and roll.

Singer Gary DeCarlo died this past week at age 75. Who the heck is Gary DeCarlo, you may well ask? The name may not be familiar, but the song he sang that had a two-week run at #1 in 1969 sure is:

The song was written by DeCarlo and his friends Paul Leka and Dale Frasheur in the early 60’s when they were in a Bridgeport, CT doo-wop group. Later that decade, when DeCarlo was looking for a B-side for a single he recorded, he dug up this old tune and it was put together in the studio. The band Steam in that video wasn’t really a band at all, just some dudes lip-synching DeCarlo’s hit!

“Na Na Hey Hey Kiss Him Goodbye” was resurrected in 1977 when the Chicago White Sox organist at Comiskey Park began playing it whenever the Sox’s opposing pitcher got knocked out of the ballgame. Soon other sports…


I’m not sure how I ended up on the Australasian side of YouTube music videos. But I’m glad I did. I’m hooked on listening to Big On Love by Models.

Kylie Mole is a character created by comedian Mary-Anne Fahey. The character was so successful that she not only did a couple songs, but even wrote a book called My Diary By Kylie Mole. She is credited with popularizing the term “bogan.” According to Wikipedia, the character of Captain Boomerang “has been reinvented as a bogan instead of his typical garish personality.”

I guess that explains the AC/DC song when they introduce him in Suicide Squad and the poster in this video. 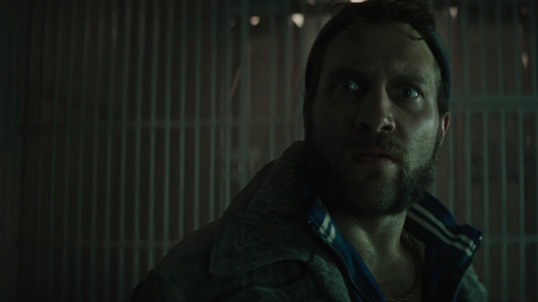 You can also see the gun-toting panda in the background.

What exactly is a bogan? I’m not going to try and classify it. There are sites that do it. There also appears to be a movement to reclaim the term. You can get an idea of what she is making fun of just by watching the video.

Yes, she did do some things with Kylie Minogue, such as the compilation below: