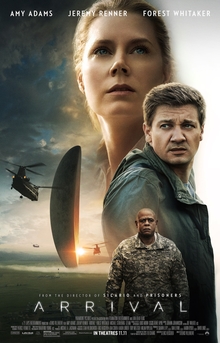 I cannot begin to express how happy I was when I learned that the Directors Guild of America had nominated Denis Villeneuve for his work on Arrival.

Working with material that would have led most directors down the road to bombast, Villeneuve instead took a deliberately low-key approach.  Whereas most directors would have encouraged their cast to play up the drama, Villeneuve encourages his actors to take a more inward and cerebral approach to the material.  Arrival is a rarity — a film about smart people in which the people actually seem to be smart.  For once, we don’t need expositionary characters to pop up and tell us that Louise Banks (Amy Adams) and Ian Donnelly (Jeremy Renner) are brilliant.  Instead, we simply believe they are from what we see on the screen.  Much like last year’s Sicario, Arrival proves that Villeneuve is a visionary director.

Arrival is a hard film to describe, not because it’s overly complicated but because there’s a huge twist that I really can’t reveal.  Before the twist, Arrival is simply a well-directed sci-fi film.  After the twist, it is something all together different, an intense meditation on faith, love, language, and destiny.  Since I’m reviewing the film late, chances are that you already know about the twist but I’m still not going to spoil it.

Louise Banks is a linguist.  Ian Donnelly is a physicist.  The Americans bring both in to help translate the symbols.  Of course, the rest of the world has their own linguists and physicists working to translate the symbols and, humans being humans, it often seems that the Americans and the Chinese are less concerned with translating what the aliens are saying and more concerned with being the first to understand.  While Louise works, she continues to be haunted by dreams and visions of her daughter’s death from cancer.

And that’s really all I can tell you without spoiling the film and potentially making myself cry.  But I will say that if you haven’t seen Arrival, you must go out and see it now.  It’s one of the most thought-provoking and emotionally wrenching films of the past year.

Add to that, it’s probably going to be nominated for best picture.  It’s been overshadowed a bit by all the attention paid to La La Land, Moonlight, and Manchester By The Sea.  But Arrival is just as good a film as any of them.  In fact, in the future, we’ll probably look at Arrival and say that it was better than all of them.