Because it was on Lifetime and it didn’t have a thing to do with football.

College is expensive and law school even more so.  Can you blame Kara (Taylor Gildersleeve) for agreeing to become the mistress of the wealthy and considerably older Grant (Peter Strauss)?  Grant pays Kara $5,000 dollars a month, gives her a new car, and flies her around in a private jet.  All Kara has to do is be available whenever he demands her presence.

Except, of course, this is a Lifetime movie and nothing is ever that simple…

To be honest, Sugar Daddies is just a fun film.  Yes, it is dealing with a serious subject and, ultimately, it does come down on the side of being poor but honest.  But, before that, you get to look at all the nice clothes and all the well-decorated mansions and you get to enjoy all of the decadence that comes from being a rich man’s mistress.  Sugar Daddies may be a cautionary tale but it definitely knows how to enjoy itself.

This movie was directed by Doug Campbell, who has previously directed such Lifetime classics as Death Clique, The Cheating Pact, and Betrayed at 17.  As a director, Doug Campbell obviously knows how to make the perfect Lifetime film and how to strike just the right balance of melodrama and social commentary.  He knows exactly how far he can push things without going over-the-top and that skill is on full display in Sugar Daddies.

Plus, the film is really well cast.  Taylor Gildersleeve is a sympathetic and relatable as Kara.  Peter Strauss seems to be having a lot of fun playing his sleazy role.  Timothy Brennan is perfectly intimidating in the role of Peter, Grant’s bodyguard who is willing to do anything to protect his boss.  Ashley McCarthy and Samantha Robinson are also well-cast as Kara’s friends.

Are you kidding?  This was Lifetime at its finest!  It all worked.

I know this where you’re probably expecting me to talk about how I used to have an old, rich boyfriend who helped to pay my way through college but instead, I’d rather point out that Kara and I both own the exact same white dress with black trim!  I was beyond excited when I saw that and plus, it really made me root for Kara because she was someone who I could go shopping with.

Private jets are the bomb and we could all use an extra $5,000 dollars a month but sometimes, it’s better to just stick with that demeaning waitressing job.

And, if you do get an old, rich boyfriend, don’t let him talk you into playing the choking game.

Because that never ends well!

Better late than never, I take a look at David Fincher’s “Gone Girl.”

I’m going to proceed with a fair degree of  caution as I write this, and you should probably do the same while reading it, because I’m about to level a pretty serious charge at a film I generally liked, and try to avoid too much by way of “spoilers” while doing so, even though it’s a pretty safe bet that almost anyone who’s interested in seeing David Fincher’s highly-acclaimed Gone Girl has probably already done so. Why the tip-toeing, then? Well —  call it a courtesy simply because, hey, not everyone has seen it yet, as evidenced by the fact that I just caught it at the local discount house (the Riverview in Minneapolis, for those interested in such details) tonight and the joynt was packed to the rafters.

First, the good : Fincher is certainly in top form stylistically here, and handles both his actors, and his admittedly combustible… 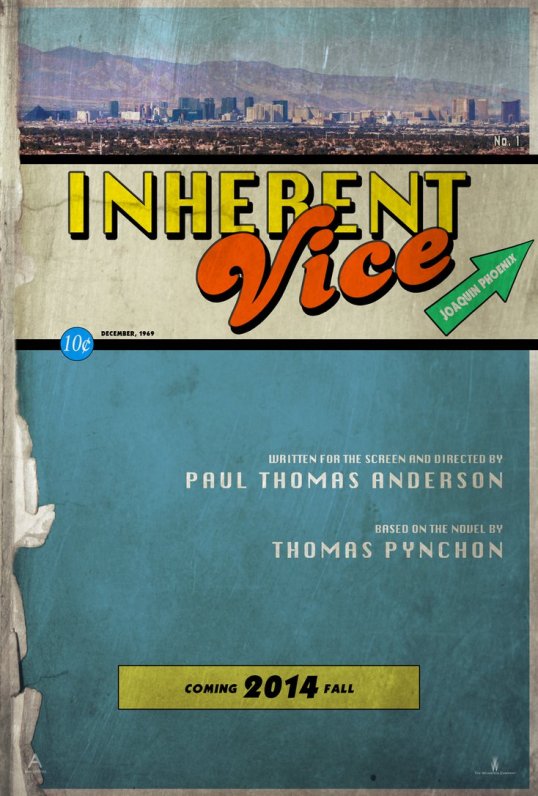 One of the best things about Paul Thomas Anderson’s latest film, Inherent Vice, is that Doc Sportello, the private detective played by Joaquin Phoenix, is a real stoner.  He’s not one of those weekend smokers, who gets high on Saturday, brags about it on Sunday, and then spends the rest of the week interning at Vox.  For the entire 2 hour and 20 minute running time of Inherent Vice, Doc is stoned.  From the minute we first meet him to the end of the film, there is never one moment where Doc is not stoned.  Most stoner comedies feature a scene where the main character shocks everyone by turning down a hit because he’s dealing with something so important that he has to “keep his mind straight.”

Not so with Doc!

And, in Doc’s case, it definitely helps him out.  Inherent Vice tells a story that is so full of paranoia, conspiracy, and random connections that only a true stoner could follow it.  Much like Doc, the film often seems to be moving in a haze but occasionally, out of nowhere, it will come up with a scene or a line of dialogue or a detail that is so sharp and precise that it will force you to reconsider everything that you had previously assumed.

To be honest, if you are one of the people who watched Inherent Vice this weekend and could actually follow the film’s plot, then you’ve got a leg up on me.  (That said, I’ve still got pretty good legs so it all evens out.)  But, that’s not necessarily a complaint.  As befits a film based on a novel by Thomas Pynchon and directed by one of the most idiosyncratic filmmakers around, the twists and turns of Inherent Vice are deliberately meant to be obscure and confusing.  Characters appear and then vanish.  Clues are discovered and then forgotten.  Connections are hinted at but then never confirmed.  Inherent Vice ultimately serves a tribute to stoner’s paranoia and, as a result, the plot’s incoherence leads to a certain contact high.

The film takes place in California in the 1970s.  Doc is both a hippie and a private detective. His current girlfriend (Reese Witherspoon) works for the district attorney’s office and doesn’t seem to like him much.  His ex-girlfriend, Shasta (Katherine Waterston), reenters his life and asks him to help protect her new boyfriend, real estate developer Mickey Wolfman (Eric Roberts).  Mickey has disappeared.  Shasta disappears.  As Doc investigates, he wanders through a psychedelic Los Angeles and deals with an ever growing collection of eccentrics.

For instance, there’s Hope Harlingen (Jena Malone), a former heroin addict who now runs a group that aims to promote “responsible drug use” among children.  She believes that her husband, Coy (Owen Wilson), is dead but actually Coy is a government informant who keeps popping up in the strangest places.

There’s Rudy Blatnoyd (Martin Short), a decadent dentist who may or may not be responsible for all of the heroin entering California.

There are Nazi bikers, new age doctors, a formerly blacklisted actor turned right-wing spokesman, a black revolutionary whose best friend was a member of the Aryan brotherhood, three FBI agents who keep picking their noses, the decadent rich, and, of course, the endlessly clean-cut and bullying officers of the LAPD.

And then there’s Detective “Big Foot” Bjornsen (Josh Brolin), a celebrity cop and occasional television extra who seems to admire Doc, except for when he’s trying to frame Doc for everything from murder to drug smuggling.  Bjornsen is probably the most interesting character in the entire film and Brolin plays the character perfectly.  His scenes with Phoenix crackle with a comedic energy that bring the film to life.

As for the movie itself, it’s not for everyone.  A lot of very smart people are going to dislike it, much as many of them did with The Master.  In some ways, Inherent Vice truly is an endurance test.  Speaking as someone who enjoyed the film, even I occasionally found myself saying, “Okay, does everyone have to have a silly name?”  Inherent Vice is a long, rambling, and occasionally frustrating film but, for me, it still worked because of the strong cast and Anderson’s attention to detail.

Unbroken is a film that seems to take place in an entirely different world from Inherent Vice but these two films do have one big thing in common.  Both of them have been victims of the expectation game.  Many of the same people who thought Unbroken would be a surefire Oscar nominee also assumed, sight unseen, that Inherent Vice would be right there with it.  Much as how Unbroken has suffered for merely being good as opposed to great, Inherent Vice is also suffering for failing to live up to the expectations that were thrust upon it.  Inherent Vice is not an awards movie.  Instead, it’s a fascinatingly idiosyncratic film that was made by a director who has never shown much concern with playing up to the audience.  While Unbroken is enough of a crowd pleaser to still have a shot at some Oscar glory, Inherent Vice is the type of film that will probably never get nominated.  (I do have some hope that Brolin will get a supporting actor nomination but, even there, it appears likely that Brolin’s spot will be given to The Judge‘s Robert Duvall.)

Well, no matter!  Flaws and all, Inherent Vice will be a film that people will still be debating and watching years from now.