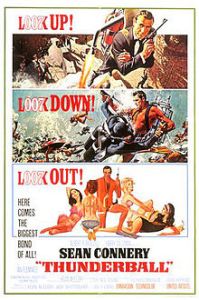 The Shattered Lens is taking on all of the Bond Films, one a day until the U.S. Release of Skyfall on November 9th. Today, we approach the fourth Bond Picture, Thunderball. Before I start, I should note that this film actually has a bit of controversy behind it. Thunderball had the potential to become one of the first Bond films, but a law suit in 1961 stating that Ian Fleming’s novel for the story was based on the screenplay for the film. Producer Kevin McClory was able to win the lawsuit and hold on to the rights. This would later result in 1983’s Never Say Never Again, with Sean Connery returning to play the same role in the same story as he did in 1965. In the meantime, Dr. No, From Russia With Love and Goldfinger were released with great success.

Before watching the movie, I watched a 1965 documentary from NBC called “The Incredible World of James Bond”, which talked about Ian Fleming, James Bond, and the overall popularity of the character. By the time Goldfinger came out, you’d find lines around theatres all around the world. People were buying colognes and watches – if it had 007 written on it, it was an easy sale. Both the books and the movies were doing extremely well. So with Thunderball being the latest release, it was similar to having perhaps the next Harry Potter or Twilight film on the way. I also learned that Q (Desmond Llewelyn) actually has a name, Major Boothroyd. That was cool to discover.

I wish I could say that I enjoyed Thunderball.  It’s the only Bond film I’ve never seen and the production values for the film were some of the most elaborate around at the time of it’s release. They went out of their way to create submersible machines and other equipment, but the fact that so much of the film took place underwater really caused me to lose interest in what was going on. Granted, it may be fun for many people, but I really wanted to them to give me a few more locales under than the major underwater harpoon fight that occurs near the film’s action climax. Both Tom Jones’ theme song (which describes Bond’s approach to things) and John Barry’s score help to set the mood of the story.

Thunderball continues the SPECTRE story started with Dr. No. Originally, this was supposed to be SMERSH, but that was a real group, much like the KGB or CIA. For movie purposes, SMERSH became SPECTRE to avoid giving any of the Bond stories an anti-nation slant. This would also be done with Quantum of Solace, the organization being something private rather than being any kind of counter intelligence group. This time around, the story opens with Bond attending the funeral of one of the SPECTRE members, and on seeing his wife getting into a car on her own (something I didn’t see as wrong), he follows her to her home to confront her. It’s revealed that the widow is actually the SPECTRE agent (I wasn’t expecting the punch that revealed it), and in the fight Bond ends up killing him. He makes a quick exit and uses a jet pack to get out of the building, where his Aston Martin is waiting for him. It was kind of interesting to see that there was that kind of technology in the 60s.

SPECTRE agent Emilio Largo (Adolfo Celi) is given the task to acquire two Nuclear weapons and decides he’s going to blow up Miami if he doesn’t get his way. Bond is assigned to stop him, and along the way he meets Domino (Claudine Auger), who assists him on this.

At the time of it’s release, Thunderball was a major hit and even won an Academy Award. It managed to come out at the height of Connery’s career as the secret agent. It does suffer from one or two flaws. As most of the story takes place on or near a beach, there are tons of underwater sequences, including a full out battle. Even Finding Nemo took some time to stay on the surface once in a while. This doesn’t make Thunderball a terrible film at all, it simply focuses the story on one element. I would have liked a little more variety.

Q’s gadgets for Bond this time around included a Geiger Counter, a rebreather, an underwater camera, and a personal flare gun, all for the life aquatic.

Overall, Thunderball’s a good film to watch if you’re doing what we’re doing here and are watching the films in a series. You may find yourself a little bothered by the amount of underwater scenes, but the movie still manages to keep some of the spy vibe of the earlier films. Below is Tom Jones’ theme to the film. Tomorrow, the Shattered Lens will take on the David Niven / Peter Sellers version of Casino Royale.