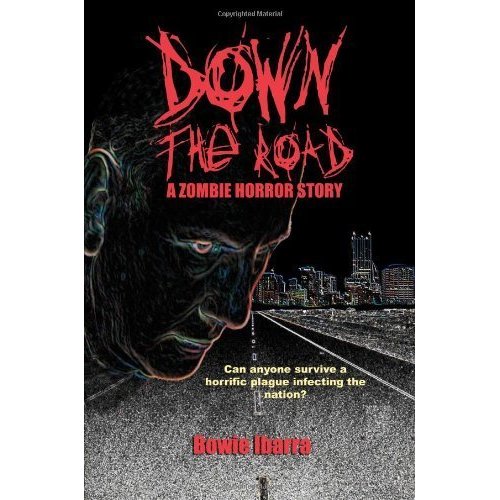 Down the Road by Bowie Ibarra is part of the renaissance of the zombie tale. While not a great novel, Ibarra’s first foray into novel length (though I would categorize this tale more as an extended novella than a full-blown novel) storytelling hits more than it misses.

Ibarra uses the the so-called “Romero Rules” in regards to the topic of the flesh-eating zombies in Down the Road. There are none of the Olympic-level sprinters of the recent trend in modern zombie films (Dawn of the Dead remake) and Ibarra’s zombies remain slow, shambling creatures with the barest of motor functions and instinct (unlike the demon-possessed undead of Brian Keene’s great, albeit nihilisitic The Rising and City of the Dead). The story’s told through the point of view of the main character, George Zaragoza, a high school teacher in an Austin school. The story starts off in quick form with George quickly going through preparing to leave the city to head for his boyhood home. There’s not of the so-called “origin” chapters that usually used to explain how the crisis first began and where. Instead the reader gradually learns from George’s interaction with people he meets during his roadtrip home about what exactly has been happening the past couple of weeks.

To say that George’s travels once he leaves Austin was eventful would be an understatement. He doesn’t just have to deal with the growing numbers of undead roaming the roads, by-ways and towns in his path, but also the danger of looters and criminals. Ibarra gives FEMA and Homeland Security top-billing as the living danger to bookend the growing undead. I may not agree with all his characterization of those two government agencies, but he does describe vividly just how quickly such organizations can go from protecting its citizens to posing a bigger danger in the end.

But his travels was not just about one dangerous crisis after the other. George meets up with other survivors who show and make him feel alive and give him some hope that not everyone has devolved to their most basest instinct. It’s in some of these encounters that Ibarra has injected a bit more sex in a zombie tale that other authors have not ventured deeply into. Who said a zombie tale meant character’s libido has to be suppressed or be non-existent. How Ibarra came about in creating the situations for the sex scenes might seem incredulous at first, but who said such things couldn’t occur in high stress situations especially when people find themselves trying to survive day0by-day or even hour-by-hour.

Overall, Ibarra’s first work looks to be a work of love by a fan of all things zombie and who knows exactly what other fans just like him want from their zombie tales. He doesn’t overdo in layering his story with layers upon layers of themes and social commentary. While the theme of how far an individual will go to survive in a crisis is there, Ibarra still sticks to keeping the story moving quickly from one end to the other. I actually thought the novel as too short. He had so much ideas introduced in the first couple chapters that I think he could’ve added another 150 pages and not lose the reader’s interest. But I’m assuming that’s where the sequel novel comes in.

Down the Road: A Zombie Horror Story by Bowie Ibarra is a very good first try by a new writer in keeping the tradition of the zombie tale alive during this second Golden Age for the subgenre. While there’s flaws in this first novel, the story itself moved at such a fast pace that I barely noticed the flaws until after I was done and by then I was already hooked by the world he had put on paper. I hope that with all the feedback he’s received from fans and fellow writers both, Ibarra’s sequel to this novel will be less of a jewel in the rough and more of the polished gem that I feel he has in him to write. I highly recommend this first novel to all fans of the zombie genre. They won’t be disappointed.


Here’s an obscure one for you. I don’t have much time to write today, so I’ll keep it short. Тарас Компаніченко (Taras Kompanichenko) is a Ukrainian early music and folk musician born in 1969. Wikipedia describes him as “an influential kobzar, bandurist, lutenist, lira player”, and I’ll leave those terms for you to investigate. The world of Ukrainian folk is vast, both unique in its own right and a major participant in the greater sphere of Eastern European music. It seems like over the last twenty years especially the former Soviet-dominated nations have exploded in a renaissance of music and tradition. If you like what you’re hearing here, dig around a bit for more. It might be hard to find at first, but when you learn where to look there’s a wealth of it out there. 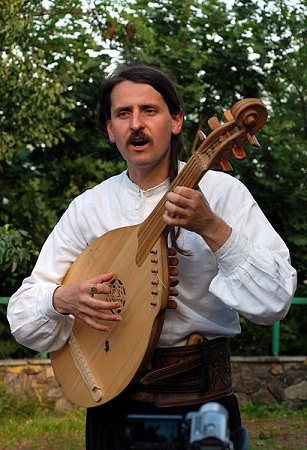