This past weekend saw fellow site writer pantsukudasai56 attending this year’s Anime Boston 2012 convention. While I was unable to attend (I’ll be at Anime Expo 2012 this summer…hooray!) he was still able to give me some of the festivities during the expo. One thing he did mention was that the class of AMV’s during the expo wasn’t anything to write home about. This was a shame since one of the things I like about anime conventions are the creative videos AMV people come up with to put up during the conventions AMV contests.

While trying to find which AMVs did win the contest at this year’s Anime Boston I came across a couple that weren’t put into contention, but I thought one of them was a great AMV nonetheless. That video becomes the latest entry in the “AMV of the Day” column.

The anime music video in question is called “I Heart Tsundere” and it’s by tehninjarox who also made one of the best Puella Magi Madoka Magica AMV’s last year with “Mahou Shoujo Requiem”. This latest amv from tehninjarox takes on the theme of the well-beloved anime/manga personality class of tsundere (def. is a Japanese character development process that describes a person who is initially cold and even hostile towards another person before gradually showing their warm side over time.). The video even uses what I could only think of as the perfect song to describe a tsundere: Katy Perry’s song “Hot and Cold”.

Scenes from many anime series were used to make up this video and all of them show great instances of what a tsundere character does to earn such a title and the hell they put their potential love interest through. The one recent anime with a character who perfectly exemplifies a tsundere character opens up the video and that’s Taiga from Toradora! and the target of her “affections” in Ryuji. One doesn’t have to even like Katy Perry to see just how this video is all about fun the tsundere way.

Here’s hoping that tehninjarox decides to create an AMV sequel video but of the polar opposite of the tsundere: the dreaded and must avoid at all cost yandere.

Continuing my review of the Friday the 13th film franchise, today I find myself reviewing the 8th film in the series, 1989’s Friday The 13th Part VIII: Jason Takes Manhattan.  As opposed to my previous reviews, this is going to be a short one because, quite honestly, there’s not that much you can say about this film.

As I discussed in my reviews of both Jason Lives and The New Blood, Jason Takes Manhattan is the product of Paramount’s attempts to revive the Friday the 13th franchise by adding in a gimmick.  This time, the gimmick is pretty much spelled out in the title.  Jason leaves Crystal Lake, goes to Manhattan, and maybe even get a chance to make his Broadway debut in a revival of Forever Plaid.  Seriously, you look at that title and you imagine that Jason going up agaisnt the Taxi Driver and or maybe taking Al Neri’s place as Michael Corleone’s personal bodyguard.  Unfortunately, as is detailed in Peter Bracke’s excellent book Crystal Lake Memories, any plans for truly having Jason take Manhattan were abandoned when it became apparent just how expensive it would be to film in New York.  As a result, this film is less Jason Takes Manhattan and more Jason Floats Around Aimlessly Until He Somehow Ends Up In Times Square For Two Minutes.

And, in the film’s defense, Jason Takes Manhattan is a catchier title.

As Jason Takes Manhattan begins, we find Jason (played again by Kane Hodder) once again coming back to life as the result of his corpse floating into an underwater power line.  Or something like that.  To be honest, it’s kind of hard to figure out just why exactly Jason has come back to life.  All that matters is that Jason comes back to life and ends up stowing away on a cruise ship that is carrying the graduating class of Lakeview High to New York City.  Needless to say, Jason is soon killing everyone on the boat, most of whom apparently die off-screen.  (Either that or Lakeview High had a graduating class of 12 students.)  The few who survive the massacre (including aspiring final girl Jensen Daggett and her boyfriend Scott Reeves) end up in a row boat and float around aimlessly until they arrive in New York.  But guess who is waiting for them in the city that never sleeps?

Several critics consider Jason Takes Manhattan to be the worst Friday the 13th of all time.  While I still think that Part 3 is the worst of the series, Jason Takes Manhattan is still pretty bad.  Among the film’s many flaws: 1) characters that are underwritten even by the standards of the slasher genre, 2) bloodless kills that, for the most part,  fail to make much of an impact, 3) very little of the action actually takes place in New York, and 4) this film features perhaps the most ludicrous and nonsensical ending to be found in a series of films that were famous for their refusal to make sense.

Still, Jason Takes Manhattan is not a total disaster.  Jensen Daggett and Scott Reeves make a cute couple and Kane Hodder, as always, makes for an intimidating Jason.  As well, even though very little of the film takes place in New York, just the idea of Jason actually taking Manhattan is amusing enough to be occasionally effective.  If nothing else, the title inspires you to imagine a better film than the one that you’re watching.

Jason Takes Manhattan was the lowest grossing of the Friday the 13th movies.  It’s disappointing box office performance would lead to Paramount selling the franchise to New Line Cinema and to a major change in the character of Jason Vorhees.  That’ll all be dealt with tomorrow when I review Jason Goes To Hell: The Final Friday. 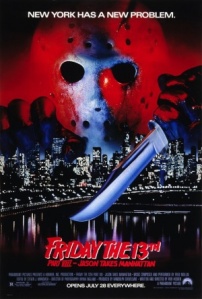