(This review probably contains what some people would consider to be spoilers.)

Today, as part of my continuing series reviewing the films of the Friday the 13th franchise, I take a look at Freddy Vs. Jason.

After spending 15 years in development Hell, the film Freddy Vs. Jason was finally released in 2003.  With this film, New Line Cinema brought together the stars of their two best-known horror franchises, Jason Voorhees (played here not by Kane Hodder but by Ken Kirzinger) and Freddy Krueger (Robert Englund.)

During the time that Freddy Vs. Jason was languishing in development Hell, a huge number of potential storylines were pursued and a lot of scripts were written.  Some of those scripts are surprisingly good and one of them (the one with the enviromental message) is hilariously self-important.  Most of them are just terrible and can be found online via a google search.  The main problem was how to convincingly bring both Jason and Freddy together when the two of them essentially epitomized two radically different subsets of the slasher genre.  Especially when compared to some of the other ideas that were considered, the concept behind FreddyVs. Jason is actually pretty clever.

As the film starts, Freddy is trapped in Hell because he’s been forgotten by the teenagers of the world.  They’re no longer scared of him and, as such, they’re not having nightmares about him.  Freddy’s solution?  He tracks down Jason (also hanging out in Hell and having dreams that neatly parody his whole image of being a murderous defender of purity) and, by disguising himself as Pamela Voorhees, he convinces Jason to resurrect himself in Freddy’s old hometown.  Jason promptly starts killing teenagers and Freddy is blamed.  Soon, people are having nightmares and Freddy has his gateway back into the real world.  Unfortunately for Freddy, Jason keeps killing everyone before Freddy can get to them.  Freddy sets out to kill Jason and it all leads to one “final” battle between the two of them.

I have to admit that when I first saw Freddy Vs. Jason, I didn’t care much for it.  Of course, at that point in my life, my view of whether or not a film was good or bad was largely based on the type of night I was having when I saw it.  I saw Freddy Vs. Jason with a guy who 1) thought proper date attire was shorts, a t-shirt, and a baseball cap and 2) who apparently thought my right breast was just an armrest there for him to lean on whenever he got bored.  Bleh.  Beyond the company that I saw the film with, I was also upset that the character I most related to, Katharine Isabelle’s Gibb, was rather brutally killed off while boring old Monica Keena was allowed to survive.  My initial response to Freddy Vs. Jason was that it had to be bad film because I had a bad time while I was watching it.

However, I recently rewatched it again with my BFF Evelyn (who always dresses up and is pretty good about not feeling me up every three minutes) and I actually enjoyed Freddy Vs. Jason a bit more the second time around.  I think it also helped that, in between the two viewings, I got a chance to see all the other Friday the 13th and Nightmare on Elm Street films along with a lot of other horror films and was now able to see how scenes that seemed pointless the first time around were actually meant to comment on the history and the conventions of both the Friday the 13th and Nightmare on Elm Street franchises.  The 2nd time around, I could better appreciate the perverse parody at the center of Robert Englund’s performance as Freddy Krueger.  While the human characters are never all that interesting, the “final” battle between Jason and Freddy is genuinely exciting.  When I first saw it, I thought that the film’s final scene (with Freddy’s decapitated head winking at the camera before laughing) was incredibly stupid but now I appreciate it for what it is — a deliberately campy homage to the over the top exploitation films of the 70s and 80s.

As opposed to the previous few films in the Friday the 13th franchise, Freddy vs. Jason was a huge box office success.  It was the first (and, come to think of it, only Friday the 13th film) that I saw in an actual theater and it actually did give me nightmares (mostly because I foolishly chose to relate to the obviously doomed Katharine Isabelle).  With that type of success, it was inevitable that there would be another film in both the Friday the 13th and Nightmare on Elm Street franchises.  Those two films, however, would not be sequels.  Instead, they would be (bleh) reboots.  We’ll take a look at the reboot of Friday 13th (and finish off this series of reviews) tomorrow. 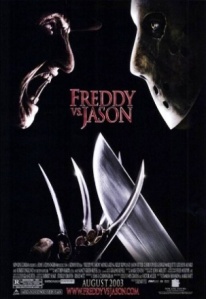