(This review contains major spoilers.  Please don’t whine about them.)

Today, continuing my series of reviews of the films in the Friday the 13th franchise, we take a look at 1993’s Jason Goes To Hell: The Final Friday.*

After the disappointing box office performance of Jason Takes Manhattan, Paramount Pictures sold the right to the Friday the 13th franchise to New Line Cinema.  At that time, New Line was best known as the home of the rival (and far more critically appreciated) slasher franchise, A Nightmare On Elm Street.  As detailed in Peter M. Bracke’s Crystal Lake Memories, several attempts had already been made to create a Freddy Vs. Jason film and it was felt, as a result ot New Line acquiring the rights to the F13 franchise, that film would be much easier to make.  However, before Jason could fight Freddy, he had to be 1) reintroduced to film audiences as a special effects-dependant New Line monster (as opposed to just a stodgy old Paramount slasher) and 2) Jason had to go to Hell.

As I’ve mentioned previously, the last few Friday the 13th films were all “gimmick films” that attempted to breathe new life into the franchise by pairing Jason’s usual camper stalking with some new element, like a psychic adversary or Manhattan.  In Jason Goes To Hell, the gimmick is that Jason (again played by Kane Hodder) isn’t just a zombie serial killer but he’s also some sort of demonic slug that, even after his outer Jason shell is destroyed, can still slither into other people and possess them.

Yep, that’s what it does alright.

Anyway, Jason Goes To Hell starts out brilliantly, with a typical slasher movie victim wandering around old Camp Crystal Lake so she can take a shower and then turning out to be a decoy who is part of an elaborate sting effort that results in Jason being literally blown into little pieces by the F.B.I.  I love this opening because it basically reflects what would probably happen if Jason ever showed up in the real world.  It may have taken 9 films but apparently, people in the Friday the 13th world are finally using some common sense.

Except, of course, they’re not.

Jason’s remains are sent to the local coroner and it’s here that we get our first clue that the New Line Jason might be a little bit different from the Paramount Jason.  See, Jason’s heart — despite being rather violently removed from Jason’s body — is still beating and the local coroner proceeds to eat it and soon, he’s possessed by the aforementioned demonic space slug.

Now, the space slug may sound a little bit silly but it actually makes more sense that, after being killed at the end of The Final Chapter, Jason was reanimated by a demon worm than that he was brought back to life by a random bolt of lightning.  It would explain why, following Jason Lives, Jason can not be killed (or apparently even slowed down) regardless of how much punishment he takes.  (It can’t explain the end of Jason Takes Manhattan but then again, what could?)  So, the demonic space slug actually makes sense.

Except that it doesn’t.

A bounty hunter named Creighton Duke (Stephen Williams) pops up in Crystal Lake and explains that the demonic space slug can bring Jason back into existence if it manages to enter the body of a relative.  Apparently, the demonic space slug is somehow linked to the Voorhees family tree and that would suggest that Jason was possessed by the demon worm even back when he was just living in that shack in Part 2.  Was Pamela Voorhees possessed by the cosmic serpent back in Part One?  Creighton doesn’t bother to say but he does explain that apparently, Jason can only be killed by a magic dagger and he has to be stabbed by a member of his family and again, you really have to wonder why whoever created the space slug and the dagger made everything so overly complicated.

Creighton Duke,  by the way, also takes the time to explain that — even though we’ve never seen him before — he’s been pursuing Jason for several years.  It’s somewhat odd that random teenagers have no trouble coming across Jason but apparently, a trained bounty hunter hasn’t been able to track him down.

Anyway, the Jason slug is now hopping from person to person because he’s trying to track down his half-sister Diane (Erin Gray) and his niece Jessica (Kari Keegan).  Creighton and Jessica’s ex-boyfriend (played by John LeMay) are in pursuit of the demon slug but eventually, the slug does manage to get inside a relative and Jason is not only reborn but he’s reborn wearing his hockey mask so I guess that was possessed as well.  Anyway, Jason is eventually stabbed by that super dagger and Jason finally goes to Hell (with Freddy Krueger’s clawed glove coming out of the ground to grab his hockey mask).

And then the movie ends.

Much as I’ve always wanted a time machine so I could go back to 1941 and experience an audience seeing Citizen Kane for the very first time, I wish I could go back to August 13th, 1993 and see how audiences first reacted to the revelation that Jason Voorhees was just a demonic slug.  How did audiences react to seeing a Friday the 13th film that, for all essential purposes, wasn’t really a Friday the 13th film?  Probably not well, considering that Jason Goes To Hell was the third-lowest grossing film in the franchise.

Seen today, the main problem with Jason Goes To Hell is that it’s just not that much fun.  Seriously, there is no excuse for a film about a space slug to be boring but yet somehow, Jason Goes To Hell manages to be just that.  I think a large part of the problem is that the iconic hockey-masked Jason is absent for much of the film.  Instead, his spirit simply possesses one random passerby after another and the end result is rather bland.

I’ve read quite a few reviews that have argued that Jason Goes To Hell is the worst installment in the franchise but I disagree.  It’s close, but it’s marginally better than both Part 3 and Jason Takes Manhattan.  It’s saved from being a total disaster by that clever opening and likable performances from John LeMary and Kari Keegan.  Though the character eventually becomes somewhat annoying, Steven Williams has a lot of fun going over the top in the role of Creighton Duke.

After Jason Goes to Hell, the franchise lay dormant for nearly ten years as various screenwriters and producers struggled to come up with Jason Vs. Freddy.  In 2002, Friday the 13th returned with it’s biggest gimmick yet — Jason in space!  We’ll take a look at Jason X tomorrow. 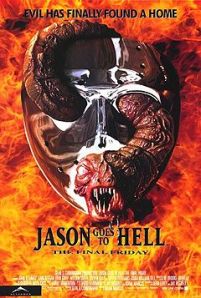 *By the way, I think I deserve hazard pay for actually sitting through this movie.