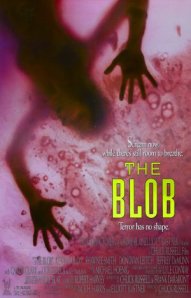 My father was working in a precinct in Manhattan, and on occasion, my family would have to drive into the city to either get his check or help him file / retrieve something there. Whenever we went to Manhattan, we always saw something grand, like the “Ghost Building” which was shimmered in white light (this was actually Rockefeller Center, but my little sister, brother and I never knew). We once even saw the ’89 Batmobile tear through the city on it’s way to deliver the video release of Tim Burton’s Batman to the Tower Records uptown.

At a stop light, right by the Flatiron Building, I happened to glance around at some of the construction scaffolds. They always put movie posters on there, and I’d squint to see what was coming out soon. That’s when it caught my eye, a pink poster that looked like someone was swimming underwater. We got a little closer as my dad had to make a turn and I was then able to make it out.

“Oh no.”, I muttered, scrunching down in my seat. “They redid it.” All my childhood fears came flooding up in a wave of memories.

I once saw Larry Hagman’s Beware! The Blob (alternately known as Son of Blob) when I was really little. The idea that a gooey mass could squeeze under doors and through window cracks and anywhere there was a space freaked me out. This wasn’t Michael Meyers looking for his sister, or Jason Vorhees guarding Crystal Lake. There was no reasoning my little mind could use to feel better about it. Add to the fact it was only bothered by the cold, it made every summer a secret “look over the shoulder” one. When I attended my first bowling match for fun in college, I’ll admit I hesitated to step out into the bowling alley, if only for a second.

I never saw the movie in the theatre. I got so caught up in Who Framed Roger Rabbit, and everyone talked about Die Hard so much that The Blob became something of a blip to the school kids (from what I remember), but it remembered. I read the poster, and kept tabs on the writer’s names – Frank Darabont and Chuck Russell, who both went on to interesting projects over the years.

Okay, enough about my history with The Blob, let’s dig into the film, which is quite possibly one of the best remakes I’ve ever seen. It hits all of the notes of the original while setting down the groundwork for new directions when some fresh ideas. It’s not perfect, but it’s damn good.

The Blob is a re-telling of the classic 1958 film with Steve McQueen, only this time, Chuck Russell (The Mask) and Frank Darabont (The Shawshank Redemption, The Green Mile, The Mist) brought Kevin Dillon and Shawnee Smith aboard. It’s the story of a small town that receives a strange visitor from outer space in the form of a gelatenous mass inside of a meteor. When an old man gets a little too curious with a yard stick, it jumps out on and onto his hand. Needless to say, if you ever see anything fall from the sky, please, don’t go running to check it out. It never really ends well. At least, I’ve never heard of it doing so.

Anyway, like the original, the old man is found by the Gallant Hero (Donovan Leitch) and Heroine (Smith), who put him in their car and head to the local hospital. This results in the death of the old man, but also a twist in that the Gallant Hero is also killed / absorbed by the Blob. Shawnee’s character tries to save him, but to no avail. She’s should consider herself lucky that she made it through okay. While I didn’t see this in the theatre, I always wondered what effect that might have had on the audience. I mean, here you had the would be hero of the story and he’s taken out of the picture in the first act. That had to be amazing, I think.

As with the original, the Blob makes its way to the main part of town by way of the sewer, heading into the local movie theatre. Before getting there, there’s a interesting scene where Meg and Flagg (Dillon) – the bad boy turned reluctant hero – run into the Blob in a diner and hide in a nearby refrigerator. Rather than go with the classic “solidify it all in one piece”, Darabont and Russell decided to make the Blob’s freezing effect more like pieces of quartz. I thought this made things all the more scary – how could one really tell that all of it was ever collected while it was frozen?

One has to feel just a little sorry for Candy Clarke’s character. You run into a phone booth to make a phone call, only to have slime run down the sides. To top it off, you try to make a phone call for the local sheriff (played by Darabont favorite Jeffrey DeMunn from all of his films and The Walking Dead), and as if it answered for her, the Blob puts his decaying face right on the phone booth window. Another twist thrown in the remake is the death of a child. Usually in horror movies, kids are usually spared. Usually. Not so here, and it just adds to the horror of things. No one’s safe unless you’re walking around with some liquid nitrogen, and it’s not like that’s in great supply.

Eventually, we come to find – thanks to a lot of men in white suits and Crossroads Joe Seneca – that the Blob was actually man made, and it’s the scientists fault it came back the way it did. What I found interesting about that was the idea that they felt they had to burn it. Didn’t anyone think of bringing something cold? I mean, they’re scientists. Someone in the group had to have that idea at some point. Anyway, this all ends with a huge battle in the middle of a busy street and the townsfolk hiding in the municipal hall. Meg and Flagg do find a way to get everything fixed, but (as with many horror movies), we’re left with the promise of another sequel.

Overall, I loved The Blob. There’s very little I can find wrong with it, given that the source material was never really Oscar worthy to begin with. This was just a sit down for the adult in me, grab your popcorn and enjoy the film.

The kid in me prefers to watch this in a very cold room, just in case.

Hi!  Good morning and Happy October the 26th!  For today’s plunge into the world of public domain horror films, I’d like to present you with a true classic.  From 1960, it’s the original Little Shop of Horrors!

When I was 19 years old, I was in a community theater production of the musical Little Shop of Horrors.  Though I think I would have made the perfect Audrey, everybody always snickered whenever I sang so I ended up as a part of “the ensemble.”  Being in the ensemble basically meant that I spent a lot of time dancing and showing off lots of cleavage.  And you know what?  The girl who did play Audrey was screechy, off-key, and annoying and after every show, all the old people in the audience always came back stage and ignored her and went straight over to me.  So there.

Anyway, during rehearsals, our director thought it would be so funny if we all watched the original film.  Now, I’m sorry to say, much like just about everyone else in the cast, this was my first exposure to the original and I even had to be told that the masochistic dentist patient was being played by Jack Nicholson.  However, I’m also very proud to say that — out of that entire cast — I’m the only one who understood that the zero-budget film I was watching was actually better than the big spectacle we were attempting to perform on stage.  Certainly, I understood the film better than that screechy little thing that was playing Audrey.

The first Little Shop of Horrors certainly isn’t scary and there’s nobody singing about somewhere that’s green (I always tear up when I hear that song, by the way).  However, it is a very, very funny film with the just the right amount of a dark streak to make it perfect Halloween viewing.

So, if you have 72 minutes to kill, check out the original and the best Little Shop of Horrors…