(Hi there!  So, as you may know because I’ve been talking about it on this site all year, I have got way too much stuff on my DVR.  Seriously, I currently have 193 things recorded!  I’ve decided that, on January 15th, I am going to erase everything on the DVR, regardless of whether I’ve watched it or not.  So, that means that I’ve now have only have a month to clean out the DVR!  Will I make it?  Keep checking this site to find out!  I recorded Escaping Dad off of the Lifetime Movie Network on December 16th!) 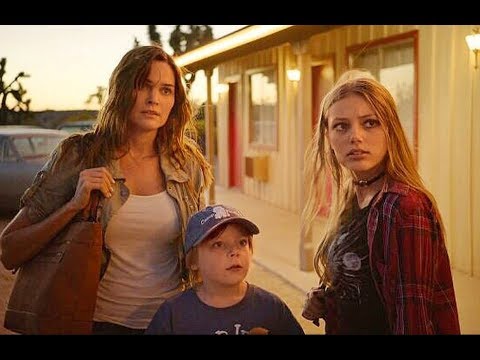 One of the good things about Escaping Dad is that the film’s premise is right there in the title.  Not only does it let you know exactly what type of movie you’re about to watch but it’s also helpful if you’re like me and you only have a ten minute attention span.

“What movie is this again?”

See, how that works?

Anyway, in this case, the Dad in question is Darren (Jason Wiles).  Darren is abusive, manipulative, and unfaithful.  He’s just the type of Dad that anyone should want to escape from.  However, Darren is also the district attorney.  That means that, if you try to escape from him, he can bring the entire police force down on you.  He can issue an Amber Alert and he can control the media coverage of the escape.  In the world of Lifetime, district attorneys are all-powerful.  You don’t want to mess with them.

However, Darren’s wife, Erin (Sunny Mabrey), decides to flee Darren and she takes her teenage daughter (Grace Van Dien) and her diabetic son (Andy Walken) with her.  (Her son has a habit of going into shock whenever the film needs an additional moment of drama.)  Erin has gone out of her way to keep Darren from tracking them down but her daughter has a boyfriend and, as soon as you see her texting him from the cheap motel where they’re staying for the night, you just know that Darren is going to be able to track them down.

Fortunately, just when things are starting to look hopeless, Erin meets a kind-hearted trucker named Wes (Trevor Donavon) and Wes not only helps them out but he also saves the entire movie.  Or actually, I should say that Donavon saves the movie by giving such a good performance as the tough but good-hearted Wes.  He and Sunny Mabrey have a lot of chemistry and it’s entertaining to watch them play opposite each other.  The film goes out of its way to show that Wes is everything that Darren is not.  “This is a real man!” the film seems to be shouting and Donavon gives a performance that proves that point.

Actually, I liked Escaping Dad even before Trevor Donavon showed up.  Yes, it’s yet another Lifetime film about an abused woman trying to escape her psycho husband.  But it’s well-made and well-acted, as well.  Jason Wiles is totally hissable as Darren and the scenes between Erin and her children felt totally authentic and believable.  The film makes good use of the scenes of Erin driving down one endless highway after another, leaving us with no doubt that she’s not only on a journey of escape but she’s also on a journey of self-discovery and personal growth.

All in all, I liked Escaping Dad.  Keep an eye out for it.

Hello there and welcome to January!

This is the time of year that the Shattered Lens usually takes one final look back at the best and worst of the previous year’s offerings in cinema, television, literature, and music!  Last year, I kicked things off by taking a look at the best that the SyFy network had to offer.

Unfortunately, SyFy didn’t produce as many original films in 2014 as they did in 2013.

However, my beloved Lifetime network remained a consistent showcase for some of the best and worst melodrama that one could hope for.

With that in mind, here are my nominees for the best films and performances that were featured on either the SyFy or the Lifetime network last year!  As always, winners are listed in bold.

Battle of the Damned

Flowers in the Attic

Kate Beckinsale in The Trials of Cate McCall

Annie Heise in The Good Mistress

Kierna Shipka in Flowers in the Attic

Kendra Anderson in The Good Mistress

*Ellen Burstyn in Flowers in the Attic*

Heather Graham in Petals on the Wind

Izabella Miko in Starving in Suburbia

Mason Dye in Flowers in the Attic

Dolph Lundgren in Battle of the Damned

James Cromwell in The Trials of Cate McCall

David Field in Battle of the Damned

Deborah Chow for Flowers in the Attic

*Nick Gomez for Lizzie Borden Got An Axe*

Christopher Hutton for Battle of the Damned

Tara Miele for Starving in Suburbia

Kayla Alpert for Flowers in the Attic

*Tara Miele for Starving in Suburbia*

Previous Entries in Our Look Back At 2014:

Last night, the Snarkalecs and I turned over to SyFy so we could watch and live tweet the latest offering from the Asylum, Bermuda Tentacles!

Why Were We Watching It?

Because it was the first SyFy original film of 2014, that’s why!  Seriously, yesterday should have been a freaking national holiday.  (Sad to say but rumor has it that the SyFy network may be looking to phase out original films — like Bermuda Tentacles — in order to devote more time to episodic television.  I sincerely hope that the network will reconsider that plan.)

The President (John Savage) has gone missing in the Bermuda Triangle.  It’s up to rebellious Chief Petty Officer Trip Oliver (Trevor Donavon) to save him!  But while Trip and his crew float around under the sea in a submarine, gigantic CGI tentacles attack Admiral Linda Hamilton and the entire U.S. Navy.  Could the two events be related?

What do I always say about Asylum films?  It all worked.  Asylum films are the epitome of low-budget fun and that was certainly the case here.  To be honest, those who criticize a film like Bermuda Tentacles are missing the point.

Asylum films are designed to be watched by large groups of snarky individuals.  That’s why I always look forward to watching them with the Snarkalecs.  And I have to say that we, as a group, were on fire last night!  We were all in full snark mood and it was a wonderful thing to behold.  Unfortunately, we weren’t able to get #BermudaTentacles trending, largely because there were thousands of tweens tweeting about fucking Ashton Irwin at the same time we were tweeting about the movie.   But still, it was a good effort and everyone should be proud.

One thing that the Snarkalecs seemed to especially appreciate about Bermuda Tentacles was just how long, by Oval Office standards, the President’s hair was.

All across America, people are saying, "Where is our long-haired, hipster President?" #BermudaTentacles

The president is alive…but more importantly, is his hair in tact?? #BermudaTentacles

"@dawnsnarks: Was POTUS a sub driver before his gig as a roadie? #BermudaTentacles" he WAS blue collar… you can tell by his hair!

@LisaMarieBowman it's probably for the best. just imagine how bad his hair looks now #BermudaTentacles

The President used to play bass in the Steve Miller Band. #BermudaTentacles

Thank you, John Savage, for not getting a haircut!

I have to admit that, unlike TSL editor-in-chief Arleigh Sandoc, I’m hardly an expert as far as military history or ranks are concerned.  However, it was obvious, even to me, that the Navy in Bermuda Tentacles didn’t appear to follow any sort of real-world protocol.  Quite a few people on twitter doubted that an admiral would be on a destroyer and some had issues with a scene where the President referred to Oliver as being a “soldier” as opposed to being a “sailor.”  This really wasn’t a big deal to me because, quite frankly, I hardly expect Asylum films to be documentaries.  However, judging from some of the comments on twitter, it was a big deal to quite a few people who had actually served in the Navy.

I had a harder time than usual relating to the characters in Bermuda Tentacles, largely because they were all career military whereas I majored in art history.  I was happy to see that the Admiral was a woman and that none of the men in her command had any problems with taking orders from her.  I would hope that, if I was an admiral, I would be just as effective.

There’s nothing quite as uniquely fun as watching a SyFy film with the Snarkalecs.  I’m already excited for the SyFy premiere of Big Ass Spider next Saturday.