Unfortunately, it appears that Miss Lucifer can’t have too much fun without God interrupting with a lightning bolt but still, at least she got to enjoy herself for a half hour or so.

“We wanna get loaded and we wanna have a good time”

That, of course, is Peter Fonda who is heard at the start of Primal Scream’s Loaded.  This vocal sample was lifted from the 1966 biker film, The Wild Angels.  Peter Fonda played Heavenly Blues.  Nancy Sinatra was Mike.  Together, they had a very good time.  The biking legacy of Heavenly Blues is continued in the video for the song. 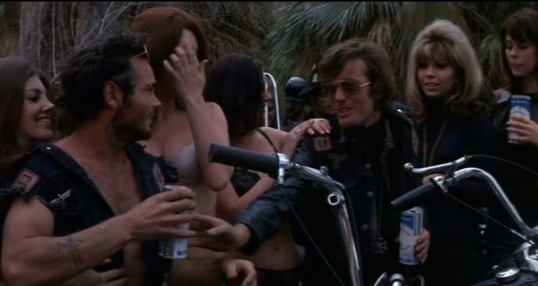 As a result of this song, like a lot of 90s kids, I could perfectly quote Peter Fonda’s speech even though I didn’t even know that it was taken from a movie.  (I think most of us assumed it was just a member of the band saying something cool.)  It wasn’t until years later that I would watch The Wild Angels and I would discover just exactly who it was who wanted to get loaded and where they wanted to do it.

Loaded started out as a remix of a previous Primal Scream song, I’m Losing More Than I’ll Ever Have.  Producer Andrew Weatherall added in not only Peter Fonda’s speech from The Wild Angels but also a vocal sample from The Emotions’ I Don’t Want To Lose Your Love, a drum loop from Edie Brickell’s What I Am, and also Primal Scream’s Bobby Gillespie singing a line from Robert Johnson’s Terraplane Blues.  Years later, Gillespie would tell an interviewer from NME that he wasn’t sure how he managed to clear the rights for all the samples but that if he hadn’t, Primal Scream never would have become the success that it did.  Loaded would go on to become Primal Scream’s first top 10 hit in the UK and, in many ways, it remains their signature song.

All thanks to Peter Fonda.

What happens when an oil company discovers new, undefined organic matter in the arctic circle?

Well, first off, they mishandle it and it ends up turning into a prehistoric, killer ape-man.

Fortunately, the world’s greatest (if unluckiest) journalist, Carl Kolchak, is on the case!

Anyway, this is an okay episode of Kolchak.  If I don’t seem as enthused about it as I’ve been about some of the previous episodes, it’s because a killer, prehistoric ape-man just isn’t as much fun as a Cajun demon or a killer robot.  Still, this episode has a nicely done, underground tunnel-set climax.  Seriously, you can’t go wrong with an underground tunnel.