There’s a new dating service in Chicago!  It’s only for the hot, single, and young!  So, why are some of the members turning up dead and suddenly old?  Could it be that the owner of the dating service has a less-than-ethical way of remaining young!?

Carl Kolchak is going to find out!

This episode aired on March 14th, 1975.  It’s not one of the better episodes but, as always, Darren McGavin is a lot of fun in the role of Kolchak.

The armor of a 12-century knight is possessed and determined to keep anyone from harming the museum in which it is currently housed.  This includes anyone who might want to build a nightclub nearby.  With the armor trying to prevent Chicago from enjoying disco, it’s up to Carl Kolchak to report the story and solve the case!

I like this episode because it features a holy ax.

All across Chicago, people are losing their hearts …. literally!  A string of murders are all connected by the fact that the heart has been cut out of the body.  Could it be the work of an Aztec death cult that’s being led by a centuries-old mummy!?

Carl Kolchak is going to find out!

Young college students are dying of heart attacks and Carl Kolchak is on the case!  Could it be just a coincidence?  Could it be drugs?  Could it be anything other than a Sumerian demon?  Well, if you know Kolchak, you already know the answer to that question!

There’s a headless man riding a motorcycle, using a sword to behead members of a rival motorcycle gang!  And …. well, really what else do you need to know?  When a headless cyclists start killing people, you don’t worry about why.  There is a reason however and everyone’s favorite nervous journalist is going to find out what it is!

After witnessing the murder of an informant, Kolchak finds himself being targeted by the mob!

Of course, after some of what Kolchak has been through, a simple Earth-bound threat like the Mafia would be a nice change of pace.  However, Kolchak soon discovers that he’s also got a witch after him!  With the help of a model (Lara Parker), Kolchak sets out uncover the witch at the heat of Chicago’s fashion industry!

What happens when an oil company discovers new, undefined organic matter in the arctic circle?

Well, first off, they mishandle it and it ends up turning into a prehistoric, killer ape-man.

Fortunately, the world’s greatest (if unluckiest) journalist, Carl Kolchak, is on the case!

Anyway, this is an okay episode of Kolchak.  If I don’t seem as enthused about it as I’ve been about some of the previous episodes, it’s because a killer, prehistoric ape-man just isn’t as much fun as a Cajun demon or a killer robot.  Still, this episode has a nicely done, underground tunnel-set climax.  Seriously, you can’t go wrong with an underground tunnel.

After annoying his editor one too many times, Carl Kolchak has been assigned to write obituaries.  However, you can’t keep a good reporter down and, when Kolchak comes across the mysterious death of a scientist, Kolchak decides to investigate on his own.  Kolchak’s defeated vampires, werewolves, Cajun demons, and serial killers.  How will he do against something made by the government? 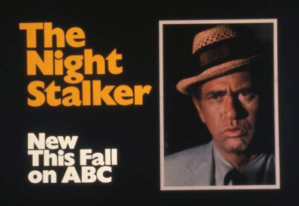 Tonight, on Kolchak, someone or something is eating the elderly and poor residents of Roosevelt Heights!  Carl Kolchak investigates!

After battling Native American monsters, Cajun monsters, and European monsters, Kolchak finds himself battling a Hindu demon in this episode.  Apparently, Chicago was quite a busy place in the 1970s.

This episode originally aired on December 20th, 1974, just in time for the Christmas season.

On tonight’s episode of Kolchak….

Kolchak investigates a series of accidents at a hospital and discovers that they’re all connected to a recently reawakened monster known as the Matchemonedo!  This episode features the great character actor William Smith as Jim Elkhorn, who teams up with Kolchak to battle the Matchemonedo.