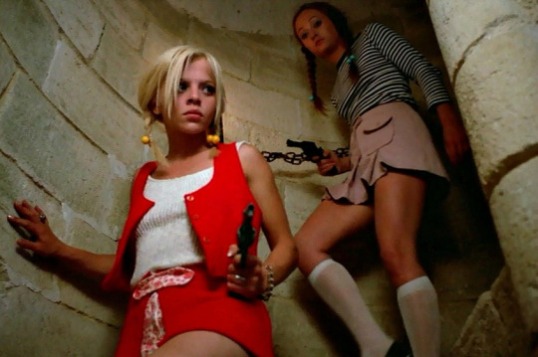 1971’s Requiem for A Vampire opens with a car chase.

In one car, there’s a male driver and then there’s Michelle (Mirelle Dargent) and her girlfriend Marie (Marie-Pierre Castel).  Who is pursing them?  Who is shooting at them?  Why are both of the girls wearing clown makeup?  These are all good questions and they’re never clearly answered in the film.  We shouldn’t be surprised about that, however.  This is a Jean Rollin film, which means that the imagery is far more important than the storyline.  In the end, the girls are wearing clown makeup because Rollin often worked clown imagery into his films.  And they’re fleeing together because Rollin’s films often celebrated female friendship.  As for why they’re being chased, if you listen carefully, you’ll hear some mention of a murder but it’s never made clear who was murdered or why or even by whom.  It’s not important.  This is a Jean Rollin film.  You either get it or you don’t.

After the car crashes, the girls wash off their clown makeup, change clothes, and set the car on fire.  They also set the driver on fire.  They claim that the driver was killed in the car accident but the actor playing the driver visibly twitches while they pour the gasoline on him.  Was that simply a mistake on the actor’s part or did Michelle and Marie essentially burn a man alive?  Does it really matter?  Michelle and Marie survived, that’s what’s important.

Marie and Michelle walk through the French countryside, stealing food and avoiding detection.  As always, Rollin’s camera loves the the beauty of the countryside.  They explore the forest.  They go down to the cemetery.  Michelle nearly gets buried alive.  It’s a dangerous world out there.

Eventually, they stumble across a gothic castle and, as you might guess from the title and the fact that this is a Jean Rollin film, the castle is full of perverse vampires who take Marie and Michelle prisoner. It’s here that film reaches a level of peak Rollin as we’re confronted with scenes of dungeons, dark hallways, and vampires transforming into bats while (literally) going down on their victims.  The castle is ruled over by a vampire woman who plays an organ and a male vampire who wants to use Marie and Michelle to continue his bloodline, specifically because neither has ever been with a man.  Michelle is totally happy with the idea of living forever but Marie is a bit less enthused and starts looking around for a random male.

What’s interesting is that, for a vampire film, the vampires themselves are largely red herrings.  For that matter, so is the car chase and the cemetery and almost everything else that Michelle and Marie have to deal with over the course of the film.  Instead, the film is really about their relationship and whether or not it will survive all of the challenges that it faces.  Marie and Michelle may both have differing views on whether or not to become a vampire but what’s the most important is that nothing be allowed to come between the bond that they share.  This was a theme to which Rollin would often return.  Dargent and Castel are both perfectly cast as Marie and Michelle, who reminded me of myself and my BFF.  If I ever get into a car chase while wearing clown makeup, I would definitely want my best friend at my side.  She makes stuff like that fun.

Especially during the film’s early scenes.  Requiem for a Vampire plays out almost like a silent film.  The dialogue is kept to a minimum and the emphasis is put on the imagery with Rollin emphasizing the beauty of the countryside and the stately menace of the imposing castle.  The film is a visual poem, a celebration of friendship, and one of Rollin’s best. 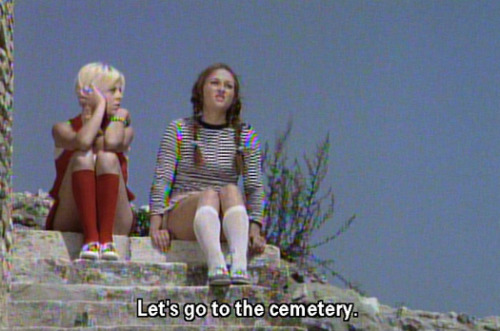